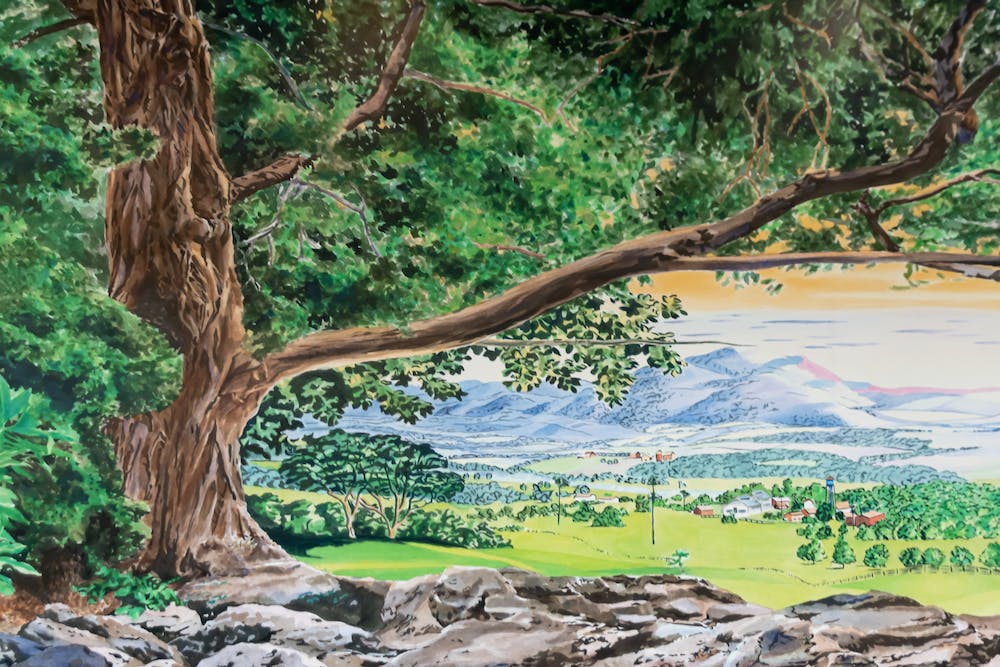 Sometimes, obscured messages come billboard-sized. Brochstein Pavilion’s newest wall art debuted last Friday for the Moody Center for the Arts’ fourth iteration of their Off the Wall series, a partnership between Moody and the Glassell School of Art’s Core Residency Program. “Death Drive” was created by interdisciplinary artist Danielle Dean to critique capitalistic greed and its exploitation of environmental and labor resources. Specifically, Dean examines the case study of Fordlandia, a utopian city conceptualized by automobile maker Henry Ford and built in the Amazon Rainforest in the late 1920s. A now-derelict rubber factory, Fordlandia’s failure had devastating consequences for the natural environment and indigenous Brazilian populations.

Dean was inspired by the aesthetics of advertisements throughout history in creating the piece, which resembles roadway advertisements.

“It kind of looks like a very large billboard stuck inside the wall,” Dean said. “It’s a watercolor that’s based on the history of advertising that utilizes watercolor or brush painting. It’s thinking about our relationship between landscape and the representation of landscape within advertising, in particular in relation to Ford cars. The adverts that are mashed together in this illustration are from Ford car ads: one from the early 2000s and one from the ‘40s. Our relationship to both landscape and the American Dream is also depicted within these adverts, which use the vast space of the American landscape as if it’s a place of freedom.”

Frauke Josenhans, the Moody’s curator, said that she selected Dean because of her previous work with large-scale installations, as well as her performances with banners and visuals. According to Josenhans, this work engages viewers to think critically about their surroundings.

“I think it is an image that will appeal to a lot of people because it has so many different layers to it,” Josenhans said. “The first thing you see is this really beautiful, peaceful landscape scenery … When you read more about the work, you understand how [corporate strategies] had a huge impact on indigenous populations in other countries — in this case, Brazil — and how these scenes, topics and narratives are still embedded in the images that surround us.”

Much like the Ford advertisements themselves, “Death Drive” is deceptively picturesque at first glance.

“It’s interesting because the audience will be lured in, because it feels a bit like a Disney-like landscape,” Dean said. “But then by reading and looking closely, there hopefully will be more of an understanding of the dark side of capitalism.”

This discordance between the natural environment and capitalist agendas for mass production is reflected throughout the piece. For instance, Dean’s watercolor acknowledges the labor of the Amazon Mechanical Turk workers by planting a computer screen in the center of the landscape.

“Nature doesn’t always abide by certain rationalist ways of being organized. The rubber trees were planted close together, and they actually suffered from tree blight and died because bugs could jump across from the trees,” Dean said. “So the connection [between] this illusion of the abundance of nature and the freedom that these Ford car adverts depict of nature is interesting [because] the car production caused a lot of environmental destruction and death.”

Dean’s archival research on Fordlandia is a major theme throughout her work. Currently, she is teaching a course about using historical archives to create research-informed art at the University of California San Diego, where she is an assistant professor. Dean said that she is particularly motivated to explore capitalism’s reliance on racism to ultimately help people reframe material histories.