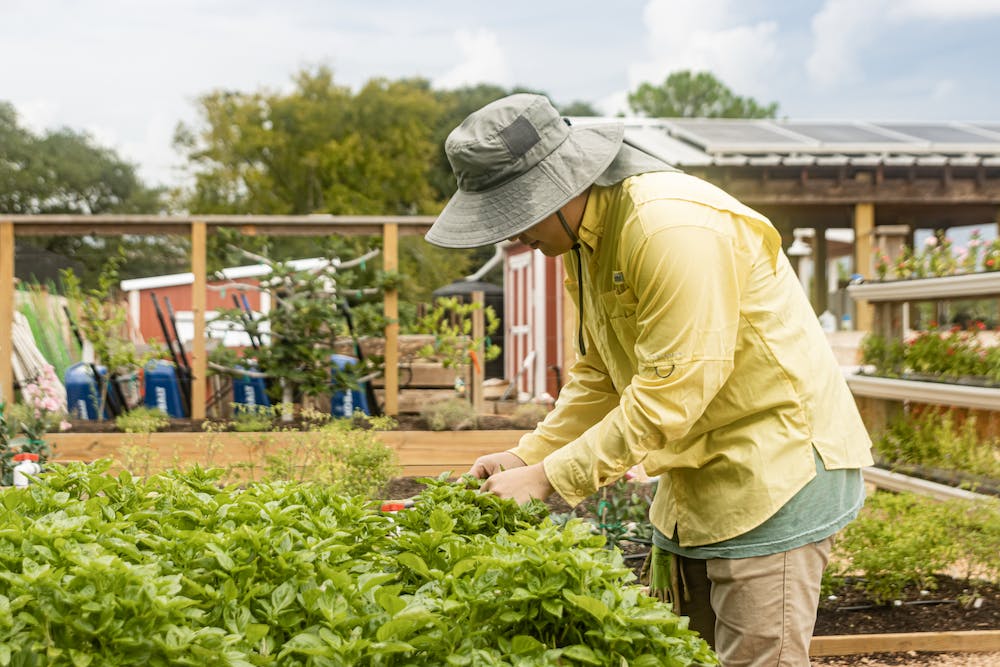 As the school year gets going, Rice students may begin the search for an on-campus job. There are lots of options — from Coffeehouse barista to teaching assistant — but some jobs are off the beaten path. These jobs are unique ways to get involved around campus and make some money while doing so.

Many Rice students have heard about Skyspace’s evening light shows, but not all know that the Moody Center for the Arts hires docents for its sunset showings. Docents give a quick presentation on the artwork, enforce rules and respect for the piece and clean up any trash.

Sarah Eunsu Kim, a Hanszen College junior, has worked as a Skyspace docent for about a year. She said that her favorite part of the job is the quiet time she gets for reflection and introspection.

“I get to watch the sunset and do my homework on the grass,” Kim said. “I wish more people would come, just in general, to be able to enjoy the artwork … Being able to work at the Skyspace is a privilege.”

After the lightshow ends, Kim spends an hour cleaning up afterwards and talking to visitors. According to Kim, as a docent she has met a large array of interesting people, from the architect of Skyspace to international tourists.

“There’s a bunch of Skyspaces across the world, and the one in Houston at Rice is unique in the fact that it has two levels,” Kim said. “Most Skyspaces only have one. So [the tourists] wanted to come see that.”

The Office of Undergraduate Research and Inquiry sponsors Peer Research Ambassadors to mentor their peers and to provide feedback to academic departments at Rice.

Anika Sonig, a Sid Richardson College senior, has been a PRA since her sophomore spring semester at Rice. She said she was inspired to get involved as a PRA after working with the OURI during the Rice Undergraduate Research Symposium, an annual showcase for Rice undergraduates to present their research projects.

“There’s so much information but it’s hard to know where to go,” Sonig said. “There’s so many majors where you can do research, but it’s not advertised as much, so you might not know how to go about it.”

As a PRA, Sonig has had the opportunity to advise her peers in both group and individual settings. She said that most PRAs work about two hours every two weeks.

“We have open office hours, and if people reach out one-on-one, we have individual meetings with them,” Sonig said.

According to Sonig, advising new students is one of the most rewarding parts of the job.

“Getting to meet the new students and seeing how excited they are, passionate about certain areas [is great],” she said. “There is information overload from [Orientation Week] onwards, so knowing who to talk to is important.”

The Office of Student Success Initiatives hosts the pre-matriculation program Rice Emerging Scholars Program for first-year students from under-resourced high schools to prepare for their time at Rice. RESP hosts a cohort of about 40 students over a six-week span in the summer. The SSI office hires upperclassmen fellows in order to support RESP students both academically and socially.

“I’ve always been really passionate about teaching and working with students,” Williams said. “I did a lot of tutoring back in high school, and that was the most fulfilling thing that I did.”

According to Williams, he typically spent about four hours a day working, whether holding office hours up to twice a week or helping with fun events outside of classes.

“The point of RESP was to acclimate students to what Rice was gonna be like academically,” Williams said.

According to Williams, the job of a RESP fellow is one that he wished more people knew about. He said that it provides a good perspective on the transition to Rice.

“It would be helpful for Rice students to be more aware of the typical culture that goes on at Rice,” Williams said. “It’s so easy [for some students] to go into classes and have all this academic preparation that most students haven’t [had access to].”

Carissa Witt, a Brown College junior, said that BIOS 204: Community Garden inspired her to apply to be a student garden worker, a position that she has held for over two semesters at Rice. Witt said she works about six to eight hours a week.

According to Witt, her job as a student garden worker is never monotonous — everyday she finds something different to do, from collecting eggs to harvesting fruit to weeding plant beds.

“It’s a very relaxing, peaceful environment,” Witt said. “It’s a good way to destress, be outside, get some quality nature time in and get your hands dirty.”

According to Witt, the garden places a big emphasis on sustainability and accessibility. There are many different parts of the garden that accommodate all gardeners, such as a wheelchair-accessible plant bed. She said the garden also tries its best to be environmentally friendly.

“The garden is completely off-the-grid. We have some solar panels on top of the roof … that powers our refrigerator where we store the produce before we send it to the serveries,” Witt said. “The produce that students eat in the serveries — some of that has definitely come from the garden.”

The Center for Civic Leadership hosts a chapter of America Reads, a program in which work study-eligible university students tutor elementary to high school-age students in their community.

Imaan Patel, a Brown College sophomore, said she learned about America Reads on the CCL’s social media before she matriculated. She worked as a tutor for two semesters.

Tutors work four to six hours every week at one of Rice’s partner sites in the Houston area. According to Patel, tasks vary based on the site – from helping elementary schoolers with homework to assisting high schoolers with their college applications.

“[When I started] I was a freshman, so I had just gotten on the other side of [college applications],” Patel said. “I felt like I was able to help, and I would have wanted that when I was a junior or senior [in high school].”

Now a junior student coordinator, Patel no longer tutors. She said that the student coordinators can decide whether they continue tutoring or not, as they typically spend their time doing outreach and planning the program’s activities.

According to Patel, America Reads aims to make tutoring as accessible as possible.

“We are working towards accessible in-person options, [meaning tutoring sites] that are Metro-able, [sites] that are walkable, and if they are far away enough, we are trying to have a reimbursable Uber option,” Patel said.

She said that venturing out into the Houston area is important.