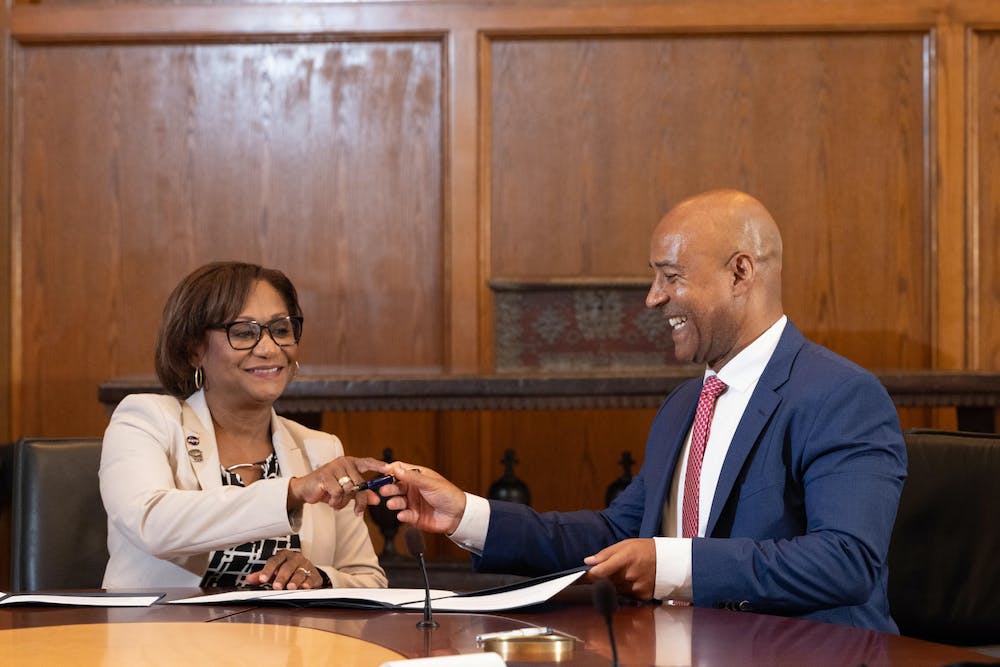 This past week, Rice and NASA extended the Space Act Agreement in a continued effort to promote relations between the university and the space administration. The SAA, which was initially established in 2012, marks a continued collaboration to provide joint research opportunities, general STEM engagement and other educational opportunities to undergraduate students and faculty.

The SAA is an umbrella agreement between Rice and NASA that acts to encourage general collaboration between the two entities, with a focus on encouraging Rice-NASA collaborative research in a variety of space-related fields, according to Rice President Reginald DesRoches.

“Robotics, bioscience and human health and performance research will be at the forefront of our efforts and will focus on enhancing astronaut health and human performance during space exploration,” DesRoches said. “Students in these areas will have exciting opportunities to work with and hear from people with NASA who are directly involved in such efforts.”

“NASA’s Johnson Space Center has a long history of working with colleges and universities since the early days of the Mercury, Gemini and Apollo programs,” Wyche wrote in an email to the Thresher. “We are eager to extend our partnership with Rice University to collaborate in vital research and technology development initiatives that will enable us to meet our nation’s exploration goals and advance human spaceflight as we work to land the first woman and first person of color on the moon under Artemis.”

“[The agreement] solidifies the interest the university has in working together with NASA,” Alexander said. “This is basically an agreement that says NASA really wants to work with Rice in many different avenues; it allows some of our students to become engaged with research at Johnson Space Center, and it allows researchers from NASA to come work in collaboration with both undergraduate and graduate Rice students.”

Wyeth McKinley, a Jones College senior, said that he hopes the extension of the agreement will extend space-related opportunities to an interested student body. McKinley has worked as a Pathways Intern at Johnson Space Center for the past two years.

“Rice has had a fantastic history tied to space exploration, and it is really encouraging to see Rice prioritizing the study of space technologies,” McKinley said. “There has always been a huge interest and demand among the student population for opportunities related to space, so it’s great that the extension of this agreement will hopefully allow more students access to space-related research.”

Beyond the agreement’s extension, McKinley said he would like to see greater opportunities and accommodations from the agreement in the future.

“I would love to see both more lectures at Rice from NASA researchers and more students from Rice in internships/co-ops at NASA,” Wyeth said. “I hope to see Rice become more accommodating of co-ops by offering more flexibility in class scheduling and financial aid for students taking time away from school [for internships].”

Jessica Tunick, a Wiess College freshman, said that she hopes the agreement’s extension will help her in pursuing work with NASA during her time at Rice.

The Space Act Agreement is part of a long history of relations between Rice and NASA. In 1962, U.S. President John F. Kennedy delivered his “We choose to go to the Moon” speech at the Rice stadium.

Rice will celebrate the 60th anniversary of JFK’s speech on Sept 10-12 with two days of commemorative activities. Some of the events include speeches from NASA astronauts, space exploration exhibits and a “Spelfie” wherein Rice students will form a giant number 60 and have their picture taken from space.

In addition to commemorating President John F. Kennedy’s speech, the days’ events will serve as a field trip for thousands of Houston public school students and an occasion highlighting Rice’s research and educational opportunities, according to Andrea Isella, a Rice associate professor of space physics.

“The celebration is a great way to have Rice in the public spotlight and remind people that we do a lot of great research here,” Isella said. “For space, [Rice] is not that well known compared to other institutions just because we are smaller in terms of astronomy and space sciences. I think this will be a great opportunity to encourage publicity and bring in students that are interested in doing this kind of research.”