Review: JID reminisces about his origins on ‘The Forever Story’ 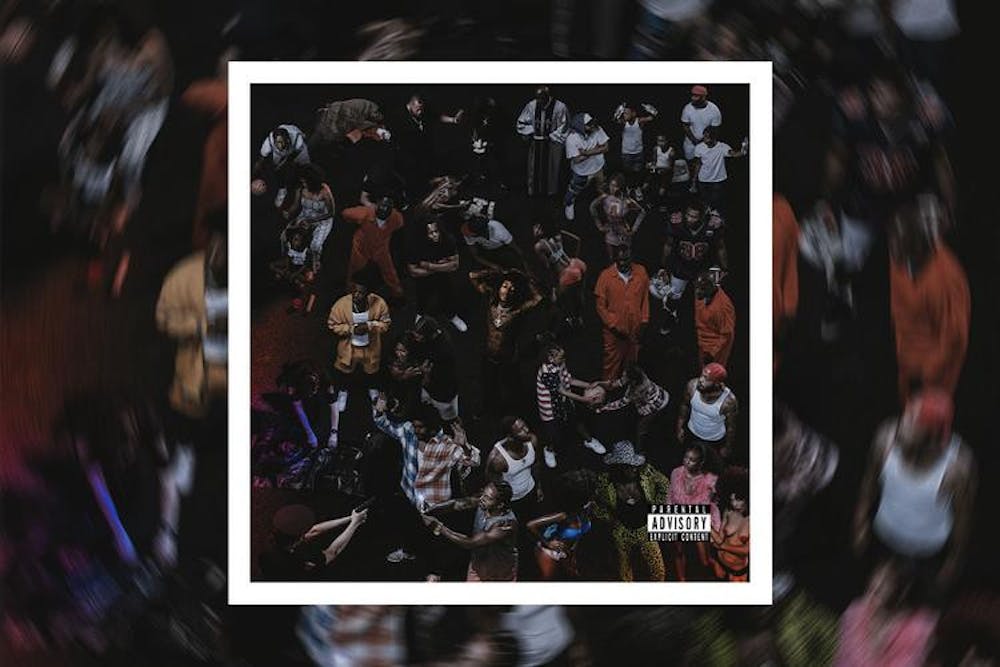 It’s been four years since JID’s last studio album, “DiCaprio 2,” but he hasn’t been quiet by any measure. In the past few years, JID has been heard on a wide range of features, from Doja Cat to Joey Bada$$, never compromising on quality and creating even more excitement for his next full work.

After being signed to J. Cole’s Dreamville records in 2016, JID released his debut studio effort, “The Never Story,” showcasing his unique vocal style and flow. “The Forever Story” takes listeners back to the topics mentioned in his debut, providing context on his time growing up in Atlanta and how he got to where he is today.

Fans’ first taste of “The Forever Story” came in January with “Surround Sound,” a collaboration with Baby Tate and 21 Savage. Growing up the youngest of seven siblings, the track is about how the constant sounds that surrounded JID in his childhood inspired his choices and informed his behavior as a youth, along with his competitive edge in the rap game.

“Surround Sound” also notably samples Aretha Franklin’s “One Step Ahead,”  a lush backing for the track that immerses the listener. The same Aretha Franklin track was similarly used on Mos Def’s 1999 classic “Ms. Fat Booty,” a track which JID pays homage to with his choice of sample. 21 Savage’s verse continues the feeling of danger and competition that JID establishes in the chorus, beginning with his discomfort with being approached threateningly on the street in his youth.

Another notable cut on the album is “Crack Sandwich,” which displays the changing family dynamic between JID and his siblings over a correspondingly off-kilter beat. Throughout the track, JID raps about them starting a brawl in New Orleans, with recordings of his siblings discussing the event interspersed throughout the verses. The chorus emphasizes his come up from poverty with the line “I ain’t got cheeseburger money, make a sandwich,” further relating the lack of resources to his and his siblings’ resourcefulness as they make a figurative crack sandwich — a metaphor for their disorganized closeness and connection to each other.

The bridge of “Crack Sandwich” is also one of the first times that we see how much JID’s vocals have improved — he revealed that he got a “singing coach” to not only “rap at the highest level,” but also “sing at the highest level.” The song is also a perfect display of JID’s signature wordplay with lines like “R.I.P., I miss my dawgs like Mike Vick,” a ridiculous comparison that refers to both lost friends and former NFL player Michael Vick’s incarceration for dog fighting in 2008.

“Stars” is a full circle moment for JID, who goes from paying tribute to Mos Def (now known as Yasiin Bey) to collaborating with him. The track is a great integration of JID’s singing and rapping with a R&B-influenced instrumental as he reflects on his beginnings trying to make it in rap, relying on his artistry and pure willpower to create at the peak of his ability. Bey’s verse discusses the use of luxury goods to conceal “the shattered spirit.”

Prior to the release of “The Forever Story,” JID released “2007,” a seven-minute track that was initially supposed to be the outro to the album. Due to sample clearance issues, it lives on YouTube, separated from the rest of the work. However, in the announcement and visualizer for the track, JID emphasizes the song as the crux of the album’s origin story.“

“2007” is an autobiographical track that references the release dates of projects like J. Cole’s mixtape series, Kendrick Lamar’s “Section.80,” and his own “The Never Story” as major events on a timeline of his career. It follows JID’s journey from starting out as a college football player on scholarship at Hampton University to becoming the musician he is today. The track recounts his meeting with EARTHGANG while on campus, and even features J. Cole sharing his initial impression of JID and the start of their working relationship. The track cycles through a number of instrumentals tied together by a coherent narrative of JID’s history as an artist in a similar manner to “Last Call,” the outro to Kanye West’s 2004 debut album.

“The Forever Story” is an excellent project from JID that recounts his origins while moving his artistry forward into a new dimension. His effort to improve his singing paid off, adding diverse textures throughout the album. JID’s storytelling, lyricism, wordplay and production are all at their peak throughout “The Forever Story,” an essential release in a year filled with strong albums.