‘This is in your best interest to leave’: LGBTQ+ students share discriminatory experiences in Chi Alpha 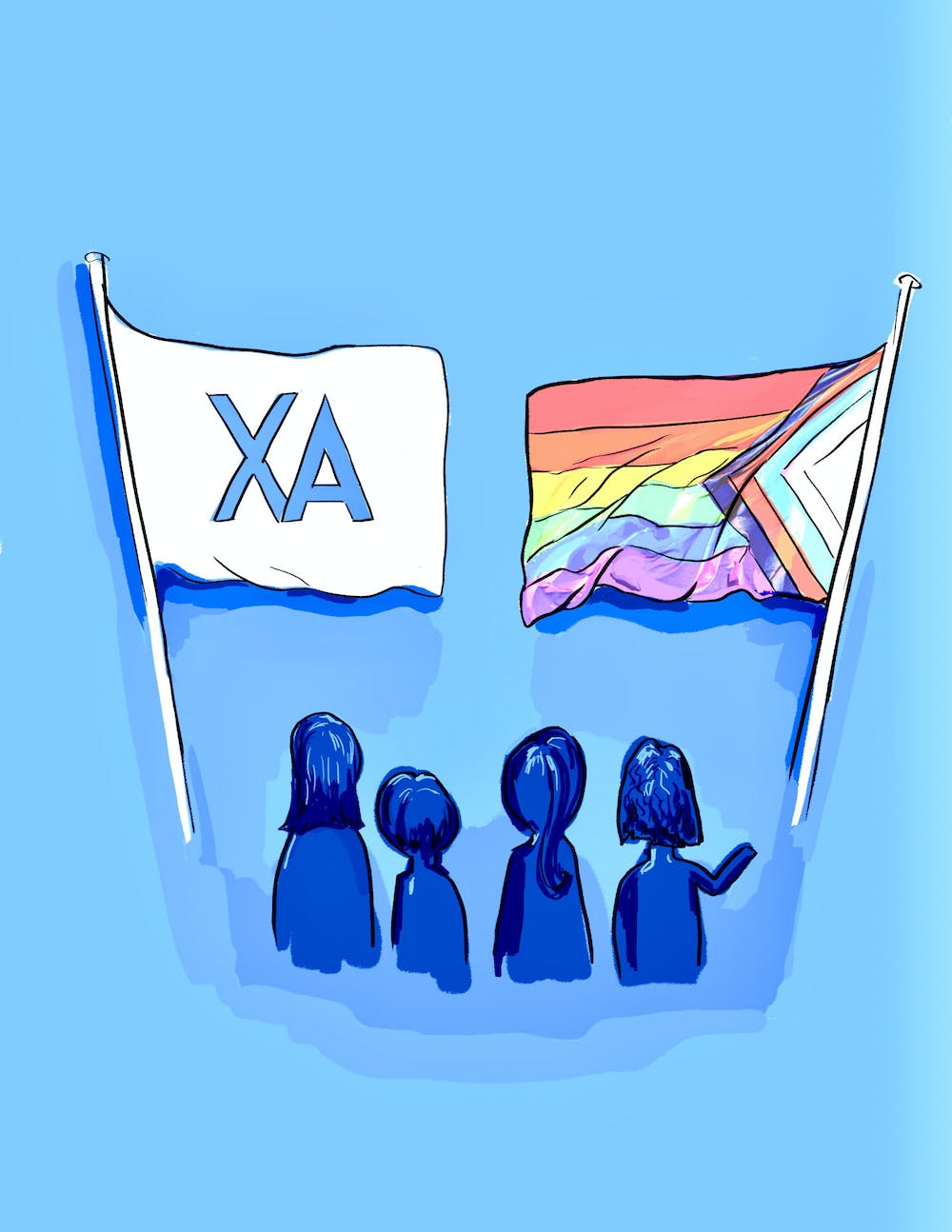 Editor’s note: Students interviewed were given the option of remaining anonymous in the interest of safety and privacy. Anonymous students who are referenced multiple times were given false names, which have been marked with an asterisk on first reference.

One of the last things newly matriculated students expect at Rice is intolerance based on sexual identity. However, the Thresher spoke to three students who shared experiences with exactly that in the national Christian organization Chi Alpha, as well as issues regarding victim blaming and alcohol consumption.

When Noel* first told her Chi Alpha small group she was bisexual as a freshman, it seemed like it wasn’t an issue. She was given the green light to begin small group leadership training.

“At least three people contacted me at different points after I shared something during a Chi Alpha activity related to being queer,” Noel said. “One or two of them were queer questioning and we found strength in each other.”

Later, in a required form prior to the exit interview to become a small group leader, Noel said she reemphasized wanting to have a safe and reaffirming space in Chi Alpha to celebrate queer students.

“By this time, I’d had several conversations with my mentor about queerness,” Noel said. “I knew that they thought queer attraction and relationships were sin, but they were also very open in talking with me about it, and I thought that their heart was becoming more open to viewing queerness as more beautiful diversity, which is loved and valued by God.”

However, Noel said her mentor and Chi Alpha staff questioned her about wanting to be a leader for queer student spaces during the exit interview.

“I explained that it was really important to me … but my mentor said that they wouldn’t let me lead if I was going to tell my members that it was okay to be bisexual, to be queer,” Noel said. “They told me that I was still welcome to come to Chi Alpha events, but only as a member, since ‘I still have a lot to learn about the queer issue.’”

Noel’s mentor then told her a story about a transgender person at a different university who joined their Chi Alpha chapter.

“[They said] after reading the Gospel, this person decided that they were no longer trans,” Noel said. “And I think that this was my mentor telling me that queer people can and are changed into straight and cisgender people by their faith.”

Noel said that although Chi Alpha did not say it explicitly, she thinks the organization believes that a person’s queerness will go away by God’s hand, and this is why Chi Alpha says they welcome queer people with open arms.

Noel said she would never have joined Chi Alpha if she had known they expected and hoped she would become “un-queer” as she deepened her own spirituality.

“If I had known that they would never let an openly queer affirming person be a small group leader, or ... that I would hear comparisons to pedophilia, I would have never joined,” Noel said. “They compared same-sex attraction specifically to being no different than any other sexual sin.”

Jesse* also came out as queer to one of their Chi Alpha small group leaders soon after joining and said that the organization still seemed very welcoming at first.

“But my friend who got me into Chi Alpha … later left Chi Alpha and told me that she was kicked out because of her sexuality,” Jesse said. “And I didn’t want to believe it, so I stayed.”

Jesse ended up becoming a small group leader after their first year. However, they said this past summer they had a conversation with a Chi Alpha staff member that felt similar to their friend’s experience, causing them to leave the organization.

“It wasn’t like, ‘we’re specifically kicking you out because you’re queer,’ but it was more like, ‘I really think this is in your best interest to leave,’” Jesse said. “It felt very much like they were trying to make it my choice, but it wasn’t really my choice. That just sat very poorly with me. It [seemed] kind of an ultimatum where it was like, you can stay and hear us preach things that you disagree with, or you can leave.”

Jesse had come out two years prior to this conversation with the staff member, but believes the conversation occurred when it did because Chi Alpha recently decided to approach Christianity more aligned with the Assemblies of God, whose guiding belief is the Bible as “all-sufficient rule for faith and practice.”

“The growing cultural acceptance of homosexual identity and behavior (male and female), same-sex marriage, and efforts to change one’s biological sexual identity are all symptomatic of a broader spiritual disorder that threatens the family, the government and the church,” the website states.

Similar anecdotes of homophobia and discrimination within Chi Alpha have been shared at the University of Virginia and other colleges.

According to Jesse, Chi Alpha staff also gave them a contract to sign in the exit interview to become a small group leader. Jesse said they did not remember ever being told about the contract beforehand.

“I was sitting in my exit interview to become a small group leader, and they’re like, ‘okay, here’s your contract, sign it,’” Jesse said. “[So] I told them when I left [Chi Alpha], ‘hey, this [contract] is super manipulative of you,’ and I hope they’re changing it.”

The Thresher obtained a copy of the contract; it outlines several guidelines for dating and sexual purity. These guidelines include only dating someone who shares “a foundational belief in and commitment to the Lord Jesus Christ,” a call to “carefully maintain our sexual purity” and to “avoid even the appearance of evil,” asking that “a servant leader’s boy/girlfriend spend the night at a location other than the leader’s home when visiting.”

The contract also specifies guidelines for alcohol consumption, which include  prohibiting excessive drinking, following drinking age laws and asking leaders to be thoughtful about their social life at Rice due to their influence on others’ lives, including at parties and bars.

Robin*, a former small group leader, said that after she was sexually assaulted at a Rice public, she talked about her assault with a Chi Alpha staff member. Robin said the first question the staff member asked was if she had been drinking.

“I don’t have [the next part] verbatim, but it boiled down to something like, ‘that’s the punishment for the sin of drinking,’” Robin said. “It was worded in a very nice way, so I think that was why at the time I believed it. We also talked about that person [who assaulted me] and [the staff member] said these are the people who need forgiveness the most and encouraged me to pray for him and to stay a friend to him.”

Robin’s privacy was also not respected by staff — she would find out afterwards that the staff member shared information from their conversations with other staff and in some cases, other Chi Alpha students.

“I did kind of not drink as much [after my assault] because I bought into and really believed their response [at the time], and so they would tell other people, ‘it’s reformation from sin,’ or make it a story to tell others,” Robin said. “So it’s under the guise of being helpful, but later, after finding this out, I would ask them to not tell anyone and then that still wouldn’t be respected. So then I just stopped saying anything.”

In a past article, students shared fears of judgement for being queer in Chi Alpha and a lack of explicitly expressed support from staff for queer students. Robin said there was a culture similar to that of “don’t ask, don’t tell” at Chi Alpha.

Robin is bisexual and said that based on her conversations with other students, there are more students who have experienced similar remarks or discriminatory behaviors in Chi Alpha.

“I knew someone in the organization who told a staff member that they were queer, and they were told something along the lines of, ‘I don’t agree with it, but I still love you as a person,’” Robin said. “I had another friend last year, who was another [queer] small group leader, and we were talking about the fact that you just don’t talk about being queer, because you just don’t know [how people will respond].”

Jesse found it difficult to leave Chi Alpha because they made really strong connections with some of the organization’s members.

“There’s some people who I still really value my connection with that I met through Chi Alpha,” Jesse said. “But there were some where it really hurt because they’re like, ‘well, we still care about you,’ but it’s hard to believe that you care about me when you disagree with fundamental identities.”

Jesse said they still respect the people in Chi Alpha.

“If you take a very conservative approach to religion, I think Chi Alpha is a great fit for you,” Jesse said. “But I know for me, I felt very forced into it when I was a student, like it was the only option, and that’s not true. There are so many other ministries on campus that I wish I had explored instead.”