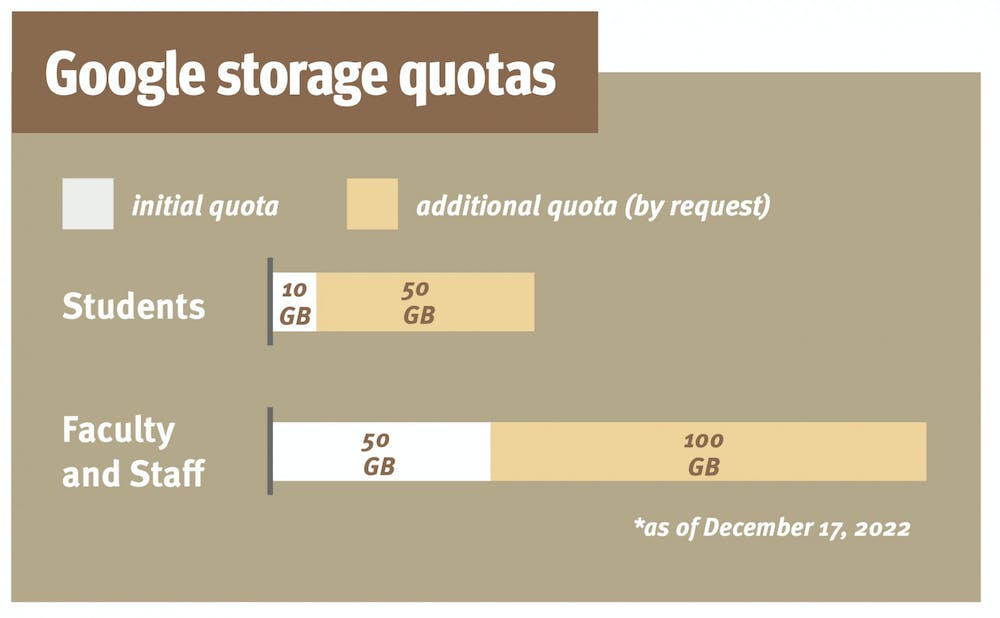 Cougle said that this decision was a result of Google’s policy change.

“Google announced changes to their pricing model for educational institutions which eliminated the unlimited storage entitlements.” Cougle wrote in an email to the Thresher. “Rice modified our allotted storage quotas based on our updated contractual obligations for both Google and Box (OneDrive remained the same).”

Ally Godsil, the Will Rice College senator who is working with Rice Office of Information Technology on the Google Drive space change, collected student responses about the change, which showed that most students use Google Drive as their primary source for storage, and this 10 GB limitation would influence their use of Google Drive to store files.  The survey includes 66 students’ responses.

Cougle said that the future changes in the Google Drive Storage would be addressed by Google.

“Questions about the reasons behind the decision and any future plans for Google Drive and other Google Workspace services need to be addressed to Google,” Cougle wrote. “And if students have any opinions on this subject, we would encourage them to share their thoughts with Google.”

After meeting with OIT on March 30 concerning the Google Storage policy, Godsil said that there could be changes in the long term and that students’ opinions still matter.

“OIT is looking to get more information from students to see what a more reasonable storage capacity is.” Godsil said. “OIT says that in the long term, they could change the storage to allow for more, like what they did in the Box storage [where] they changed the original contract to allow for more storage this past year. However, unless Google makes a complete switch in policy, I don’t think we are going to get unlimited data back.”

Godsil said that this change will not happen until the end of the next fall semester.

“People will not lose their files now.” Godsil said. “And when this change in storage to 10 GB does happen, the files that people already have would not be deleted, but you cannot add anymore.”

For students whose Google Drive files exceed 100 GB, Godsil said that OIT would directly reach out to those students and provide them with assistance to migrate their files to other storage locations.

“Additionally, OIT can allow students to have 50GB if they have [reached] up to 90 percent of 10 GB, but they cannot allow everyone to have 50 GB because it’s too much, [and] not everybody uses that,” Godsil said.

Michelle Fox, a freshman from Hanszen College, said she is personally neutral on the Google Storage policy change, but understands students who are upset by the announcement.

“Personally, I don’t think I would have an issue with it because I don’t see myself using up all 10GB, but for some students who have loads of projects on their Drive that take up a ton of space, the unlimited space is necessary for their grades,” Fox said. “I just hope Rice can ensure students won’t run out of space when using Google Drive for school and projects.”

Wendy Yao, a sophomore from Martel College, said that she would use Box as the alternative after this policy occurs.

“I would not be hugely bothered by this change since I still have the Box as the choice for me to use as my storage,” Yao said.