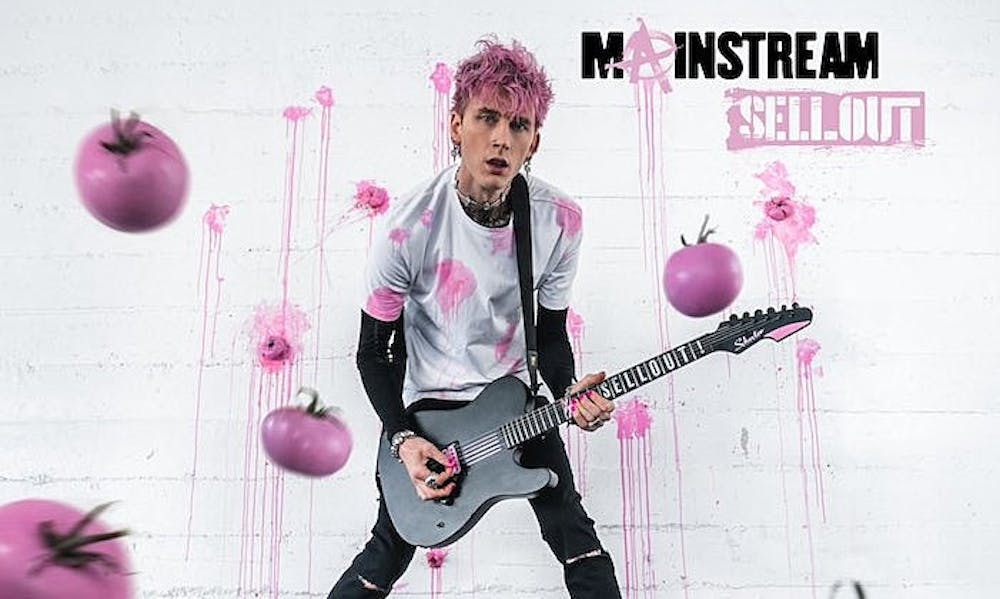 Since rapper turned self proclaimed “new face” of pop-punk Machine Gun Kelly released “Tickets to my Downfall” in 2020 and broke into the pop-punk scene, Kelly has been the subject of public vitriol, and his recently released album “mainstream sellout” revolves around this, lamenting his perceived outcast status, pop-punk gatekeepers shunning his music and his own struggles with mental health. The 2022 release is, unfortunately, an album that feels forgettable in its sameness between songs and as if it borders on parody of the genre with none of the humor of satire.

The album shines its best during its collaborations, including  “make up sex” featuring blackbear and “emo girl” featuring WILLOW, with another voice to balance Kelly’s more redundant sound. In songs by himself, Kelly’s voice at times felt like an obstacle to the music itself, and while the album gets off to a roaring start it’s difficult to find tracks that stand out.

That being said, there is some praise to be had for tracks on the album. As fun as it is to hate “emo girl” with its simplistic chorus of, “I fell in love with an emo girl,” the rambunctious single has its highlights, like the easy to miss sample of “I am a god,” spoken by Megan Fox, Kelly’s current partner, in the film “Jennifer’s Body.” In particular, WILLOW’s verse in the song stands out. Pop-punk and many alternative scenes have a history of often being dominated by whiteness especially in the sphere of mainstream attention, so when WILLOW sang, “She puts eyeliner on her dark skin,” it was a simple line but one that signaled a shift, hopefully, towards a more inclusive future for pop-punk, one that WILLOW is helping to shape as a pop-punk revivalist.

Our favorite track, “drug dealer,” largely earned that status because of the balance between Kelly and Lil Wayne. The lyrics aren’t revelatory, but it was fun to listen to and stood apart from the rest of the album.

Much of the album revolves around Kelly feeling like an outsider or pushed aside; in the song “mainstream sellout,” the chorus of, “Leave the scene you’re ruining it,” illustrates the way several pop-punk artists and fans shunned Kelly adopting the genre. The focus on this outsider dynamic makes sense for Kelly’s discography and for the genre, but at times it felt overwrought and like it was a satirical take on the self-hatred of pop-punk artists.

In the course of listening to the album, it was easy to gloss over the darker lyrics; multiple songs reference suicidal thoughts, self harm, struggles with mental health, toxic relationship dynamics and drug abuse. It left us wondering: “Machine Gun Kelly, are you okay?” Songs also touch on traumatic experiences such as the death of his father. However, these lyrics gloss over this instead of delving in and exploring, causing the songs to feel like something between a cry for help and an attempt at emotional depth that isn’t achieved.

At times, lyrics were even baffling. In the ultra-edgy, “god save me,” Kelly proclaims, “Spaceships in the sky, we’re not alone,” without lingering long on the assertion of alien life before delving into mentions of government surveillance and, “Fuck the cops. Read me my Miranda rights.” Perhaps these lyrics signify how Kelly is at odds with society just as much as the pop-punk music scene, but they felt out of place in a song that largely revolved around drug use and his struggles with mental health, containing references to suicidal thoughts and the pressure of his public image.

Each song is good on its own, but listening to the album all the way through feels monotonous quickly. The only real break for listeners came with “twin flame,” with a different sound and pace to distinguish it from the fifteen proceeding tracks, one of several tracks that glimmers with mentions of Kelly’s relationship with Megan Fox that has dominated the media for the past months. The tracks would hopefully be more enjoyable to listen to outside of the context of the album when given more space to stand on their own.

In its entirety, “mainstream sellout” has enjoyable tracks and is worth a listen for previous fans of Kelly’s work or pop-punk devotees who will either hate it or love to hate it (Morgan falls into the latter category). An album brimming with future potential, we will see what music Kelly conjures up next and we hope that, in the interlude between “mainstream sellout” and his next album, he considers reaching out for help beyond one-off lyrics in a song.