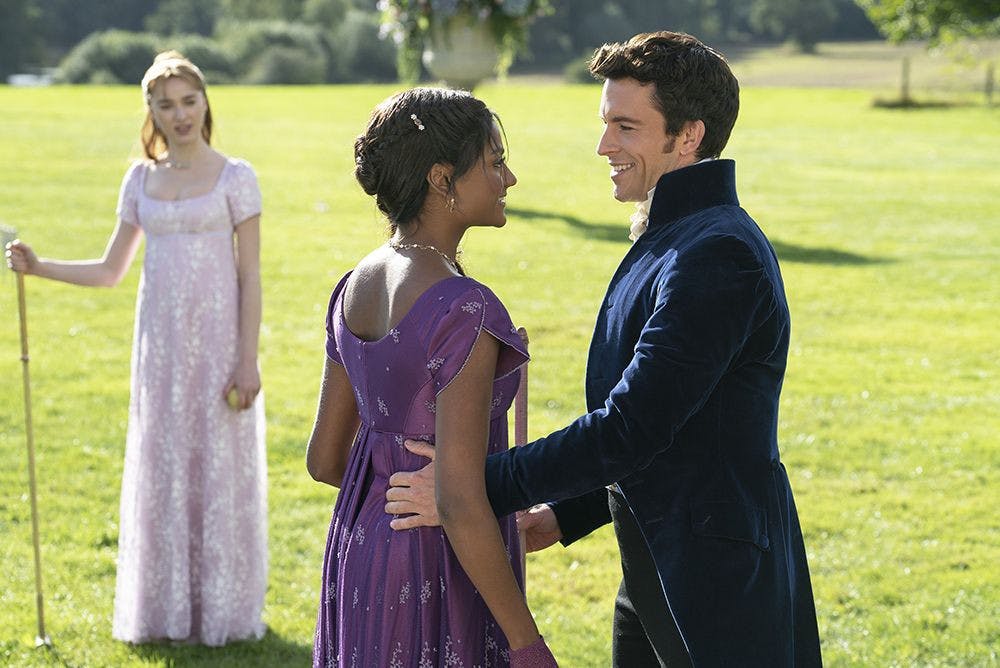 Dearest readers, it has been almost two years exactly since I have seen the ‘Ton so abuzz with whispers of a show that allots equal screen time to searing eye contact as actual dialogue. Season two of “Bridgerton” premiered March 22 on Netflix to general elation from slow-burn romance lovers and utter dismay from those who will suffer friends donning fake British accents for the next month. As a proud member of the former group, this was an exciting time.

While season one followed Daphne Bridgerton through her search for a match amidst a wedding season in 19th-century England, the second season pivots its focus to the eldest member of the Bridgerton clan. Based on the second book of the series the show is adapted from, “The Viscount Who Loved Me,” we follow Antony Bridgerton through his battle between the duties as eldest son after his father’s death and his heart’s desires.

For those who’d like to avoid spoilers and simply want to know if “Bridgerton” falls into the classic “show that had a great first season and inevitably disappointing second” trap: it doesn’t. All the reasons that made Bridgerton great in its first season are still there. Diverse cast, heart breaking arguments, hold your breath tension and scenes that make you ask “am I really this worked up over their pinkies touching?” All there.

If you’re considering watching the show and have not yet, I would stop here. Shonda Rhimes scripts these scenes much better than I could ever hope to describe them. While the idea of an enemies-to-lovers plot line is in no way original, “Bridgerton” doesn’t want to do original. Rather, Bridgerton thrives on taking tropes so cliche and executing them with such precision that you don’t care that it's cheesy, because you’re too invested in the characters to mind. This season relies on this investment more than the last, asking you to put aside not only the soapy dialogue and good-natured characters becoming collateral damage.

Bridgerton had a notably diverse cast in its first season, with Black actors playing both the Duke, noblewoman Lady Danbury and the Queen of England. It is explained that racial equality was achieved when the white king elected to marry the queen, bringing about racial equality in the process. While it is a simplistic idea of how racial equality could be achieved, it opened the stage for diverse cast members to fill roles of all rankings, something scarcely seen in period pieces. By setting “Bridgerton” in a place removed from racial inequality, the show is limited to making comments on race and class, issues intimately intertwined in real life, to quick lines in side scenes. However, I believe the benefits of having a show with positive and plentiful representation of members of multiple races and classes outweighs the cons of the show not being able to delve as deep into those issues as others might.

My only real gripe with the show is how it handles its endings. With season one, I lamented how they handled the Duke’s desire to not have kids. The show seemed to argue that if you make him have a child he’ll eventually get over the familial trauma that made him not want kids in the first place. I wanted the show to take more time with his transition, rather than ask us to accept that this critical plot point that fueled the first half of the season disappeared in the second. Season two falls victim to the same issue. The show excels in building up conflict, yet, rather than make characters face consequences for their actions, the need for a happy ending in eight episodes requires they rip everything down in a few scenes.

There are so many other avenues of this season that deserve attention, but it is the very magic of “Bridgerton” that there are too many characters to cover them all. The season gave more backstory and new dimensions to nearly all of the side characters from season two, leaving the show in a great place for a third season. With six more books left in the series and the general praise the show has received, I am quite sure more angst and wordless glances between characters who hate to love each other is in store. While the enemies-to-lovers trope has been written by a million pens, it is always a treat to watch it done well.