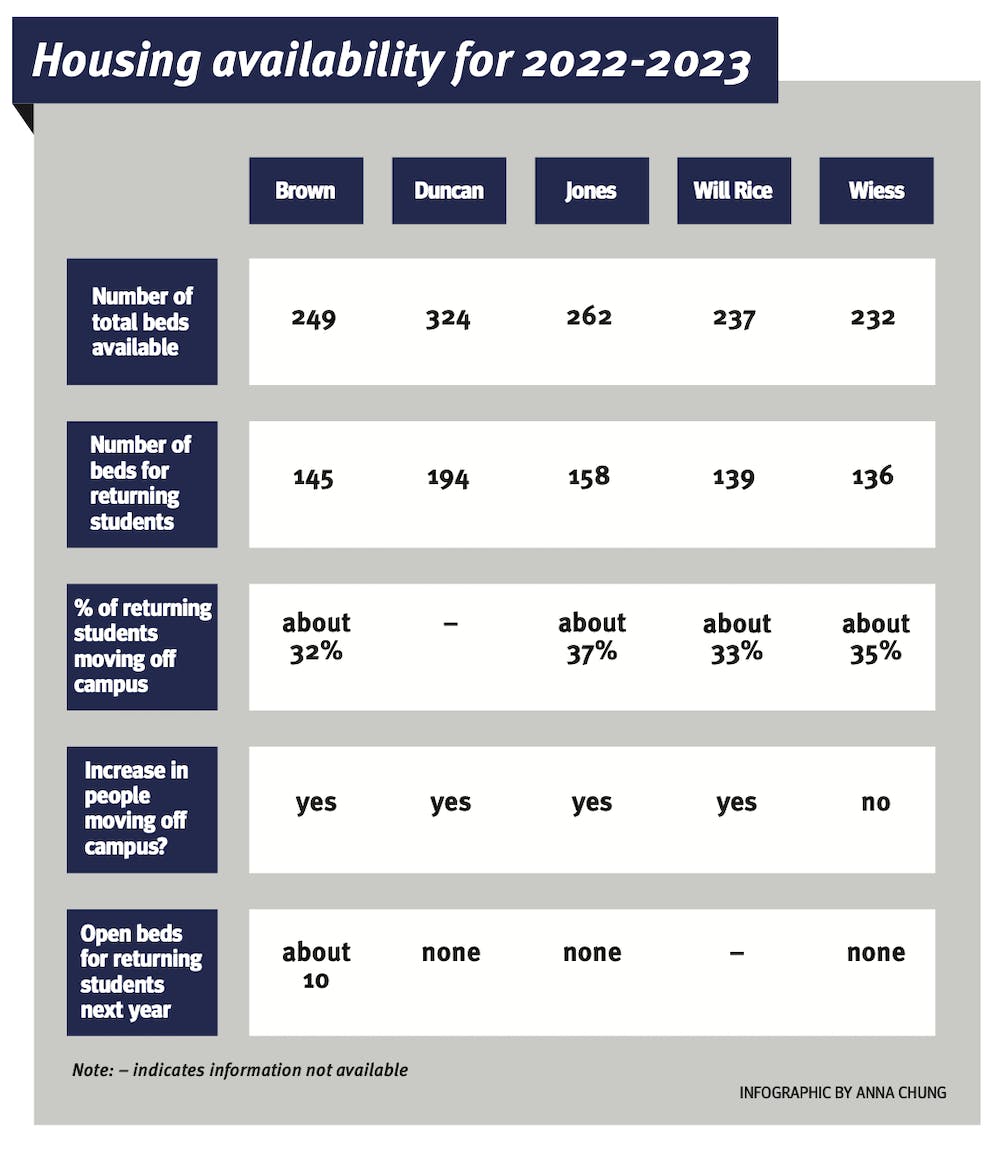 Several residential colleges, including Brown College, Duncan College and Will Rice College have reported a decline in student interest for on-campus housing next year, attributing this decrease to several factors including the pandemic, housing prices and food options. However, some colleges, such as Wiess College, have also experienced less on-campus housing availability, partly due to the larger size of incoming classes.

Wanqi Yuan, Duncan legislative vice president, said that 75 students from Duncan elected to move off-campus for the next school year, which is a sizable increase from previous years.

“[The number of students] voluntarily moving off [campus] has increased a decent amount in the last year or two,” Yuan said.

At Brown, the number of juniors and rising sophomores moving off campus was significantly higher this year, according to Brown Internal Vice President Maria Valera Wagner. She said that attempting to fill empty beds at Brown has been difficult.

“We had something like over thirty people on the waitlist, and by the time the housing draw was over, only about four or five of those people actually wanted a spot on campus,” Wagner, a sophomore, said.

Will Rice also saw a surprising rise in the number of students opting to live off campus, according to William Tsai, Will Rice external vice president.

“This is completely unprecedented,” Tsai, a sophomore, said. “We had rising sophomores in single rooms, which are historically the most coveted rooms at Will Rice. For the first time, we also saw no students on the waitlist. Everyone who wanted on-campus housing was able to obtain it.”

Jones College President Daniel Helmeci said the number of people voluntarily moving off-campus has not risen dramatically. However, according to Helmeci, the increase in the incoming class size has resulted in more upperclassmen being bumped off campus involuntarily.

“A large reason why Jones is having to bump off upperclassmen is due to the fact that Rice is increasing its undergraduate population by 800 without already having built new residential colleges to absorb the increased numbers,” Helmeci said. “This is very damaging to smaller colleges like Jones and Lovett [College] who have already been forced to grapple with the issue of kicking off sophomores [and] not being able to [offer] singles to all seniors as was tradition in the past.”

Bridget Gorman, the dean of undergraduates, said that Rice is planning to open the 12th residential college in Fall 2025.

“We are at the very beginning stages of that project, however, so it’s too soon to discuss specific details,” Gorman said.

Hugo Gerbich Pais, a freshman at Duncan College, said that while he was looking forward to living on campus housing, he now has to live off campus because he got bumped.

“I originally opted into on-campus housing because I am a freshman and it seemed like a convenient option and a great way to meet people,” said Gerbich Pais. “[Being bumped off campus] was not expected as I was one of approximately 15 rising sophomores that got bumped. ”

Helmeci said that he found the number of upperclassmen having to live off campus to be the biggest problem in a lot of room draw coordinators’ minds right now.

“We are faced with bumping more and more people than before which is quite problematic considering the lack of institutional knowledge if upperclassmen lose access to on campus housing,” Helmeci said.

Unlike some other colleges, Wiess had fewer students opting to live off campus than in previous years, according to Madeleine Cluck, Wiess housing representative.

“If anything fewer people moved off this year compared to last,” Cluck, a junior, said.“I’ve heard of people having a more difficult time staying on campus because people are not moving off campus. We had a group of juniors get doubles and that rarely happens.”

Tsai said that he believes that COVID has been a driving factor behind the unprecedented number of students volunteering to live off campus at Will Rice.

“As Senator last year and EVP this year, I’ve noticed a worrying lack of engagement in the residential college community,” Tsai said. “A critical mass of people simply feel detached from their residential colleges, in part due to the many COVID restrictions that have hampered down on social events both within and between colleges.”

Wagner said as IVP she has heard numerous complaints from students from Brown wanting to move off-campus because of the gross overcharge for Brown housing with the disparity between facilities at Brown compared to other colleges.

“A lot of students at Brown do not like using the communal bathrooms and don’t like the facilities in general. There’s certainly a lot of complaints from members at Brown that they pay the same amount for housing as someone at McMurtry [College] or Sid Richardson [College], for example,” Wagner said. “When people apply to a top 20 school like Rice, they often end up pretty disappointed when they live in the kind of housing Brown offers.”

Annie Zhang, a freshman at Brown, said that she voluntarily chose to move off-campus because of the facilities

“I am not happy with the facilities at Brown,” Zhang said. “I wanted to move off campus because I want my own room and better facilities.”

Dingding Ye, a freshman at Jones, said that she voluntarily chose to move off-campus for next year.

“I would say that the price of living was definitely a factor in deciding to live off-campus but not the facilities,” Ye said.

Yuan said that she believes that the two biggest reasons the number of students electing to move off campus is rising are housing price and food.

“Rice has increased housing prices significantly [in] the last few years. [Also] students don’t have the most positive opinions on servery food, and being on campus requires you to purchase the full meal plan which many students do not use all 21 meals of,” Yuan said.

Wagner said she believes that the Rice administration needs to take action and be more concerned over housing issues than it currently is.

“For residential colleges like Brown, the only way Rice can [continue with its strong, developed, tight-knit culture] is by lowering their price for housing, given that it’s often more expensive than off campus housing, or by increasing the quality of housing,” Wagner said.