BakerShake presents ‘Twelfth Night’ in celebration of their semi-centennial 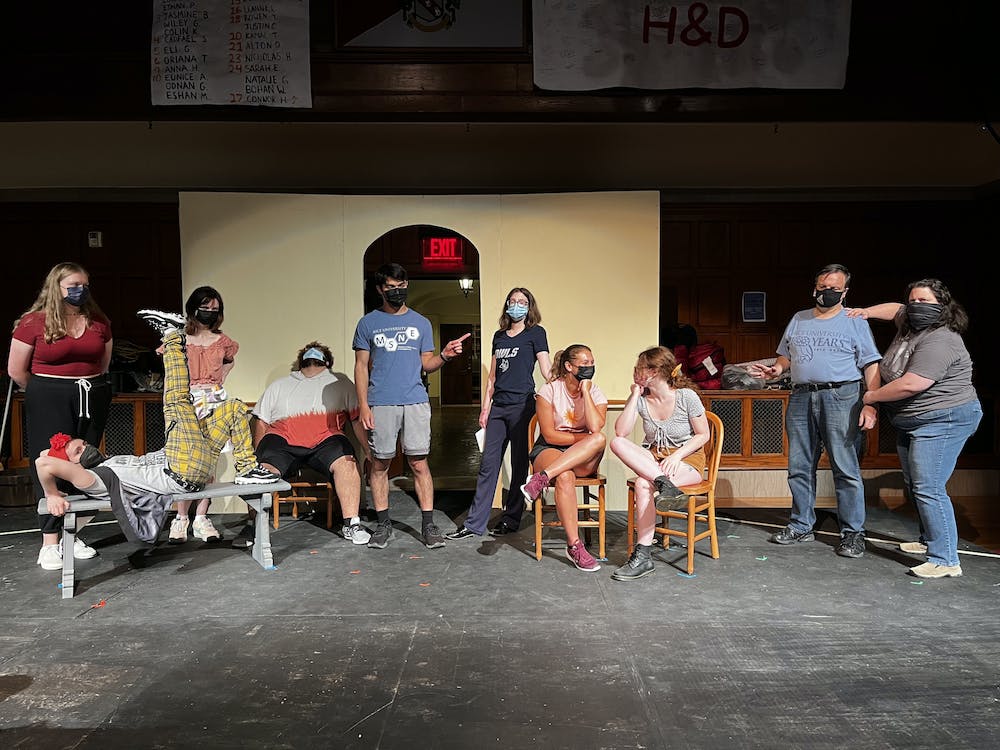 Houston’s longest- running Shakespeare tradition, BakerShake’s performance of “Twelfth Night” marks the 50th performance of the Bard’s work on stage at Baker College commons. Performances will be April 21 through 23 at 7:30 p.m. and April 24 at 1 p.m. in Baker commons.

Assistant Director Bria Weisz said the production is staying true to Shakespeare’s text and script, but set in the 1990’s to give them space for the stories they want to tell.

“‘Twelfth Night’ is a really interesting show in terms of what it says about gender and sexuality. There’s a lot of cross dressing and love triangles and etcetera,” Weisz said. “We decided to have the show take place in the ’90s just because that’s a really interesting time for the gay rights movement and things going on in that regard. And it’s been interesting to take the story and adapt it to a new setting. We’ve [been able] got to have some really great conversations around the text.”

According to Morgan Gage, who plays Viola, the show’s protagonist, aside from a few cuts for brevity, they have kept all of Shakespeare’s words, just with some reinterpreted meanings.

“It’s really interesting how this play embraces the fluidity of both gender and sexuality in a really unique but also entertaining way,” Gage, a McMurtry College junior, said. “We’ve taken the time to block moments at the end of the script that were not originally written into the play to kind of give some resolution … because Olivia is in love with Viola thinking that she is a man. And in the end, we get to have a moment, which I think was really meaningful for all of us to add.”

Veering slightly from BakerShake’s traditional process of selecting a play and director from pitches during “Bard’s Night” in the fall, Bree Bridger said she came on to the production as a director before “Twelfth Night” was selected to be this year’s play.

“We had a ‘Bard’s Night’ where students came together and we talked about what plays sounded right,” Bridger, Baker associate, said. “We knew we wanted to do a comedy because we all need a laugh right now. So ‘Hamlet,’ ‘Romeo and Juliet,’ those were kind of put to the side. And [for] me personally as a director, ‘Twelfth Night’ is one of my favorite Shakespeare works … So I proposed that one and people liked the idea of it.”

Gage said she was nervous coming to auditions, which felt high-stakes because of how strongly she identified with Viola’s character.

“When I was 15, I read ‘Twelfth Night’ as part of a elective literature class in high school and I thought to myself, if there’s any Shakespeare show I want to do it is ‘Twelfth Night’, and if there’s any role that I want to play it is Viola,” Gage said. “Being able to play this part has been really exciting and it means a lot to me just because it’s such an interesting role, one that I’ve wanted for a while.”

Gage said the production’s longer rehearsal process gave the cast the opportunity to become better acquainted with the script and their own characters.

“A lot of our early rehearsals were honestly just sitting down at the table and looking at the text, because Shakespeare’s words are so rich in meaning,” Gage said. “There’s so much there whether you’re looking at the fact that it’s written at times in verse, or metaphors or frankly very inappropriate jokes that you don’t necessarily understand at the first read. Bree would stop us at the end of each scene that we read through and ask ‘Okay, what are you saying here?’”

Besides the students, alumni and associates stay involved in the production, according to Bridger. Greg Marshall (Baker ’86) said while he never had the chance to be anything besides an audience member as an undergraduate, he has since helped with promoting the show in the years following his return to campus as a Baker associate in 1992. Over these years, he said BakerShake has remained the same in the ways that matter most.

“It is still and always was a student initiated, student-led production. And it always should be,” Marshall said. “A lot of alumni now are available who are happy to help when called upon and yet I think they all are very respectful of the fact that this needs to be a student-managed and student-initiated production.”

Among BakerShake alumni are names like Jim Parsons and Candace Bushnell, visiting actors from Royal Shakespeare Company in London. This year, though, Gage said the cast and crew are all Rice affiliated, the majority being students.

“It’s also just very interesting to be working on a production this long with people who know our audience, like we know that we’re putting the show on for ourselves and for the gratification of putting on a story that we’re proud of, but also for an audience that we know and love and that like we call home,” Gage said.