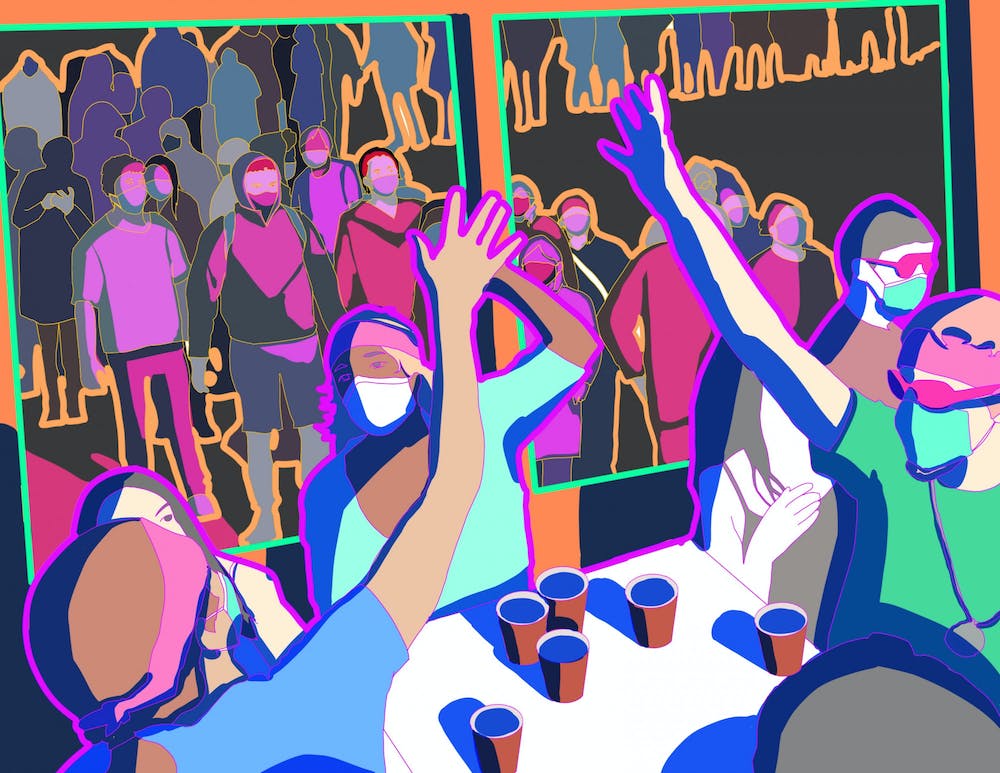 Public parties will be returning to campus the weekend after spring break for the first time in two years, according to Dean of Undergraduates Bridget Gorman. The first public will be held on Saturday March 26, followed by one every weekend until the end of the school year.

Unlike past publics, these parties will be held outdoors and most colleges will host them in pairs, according to Gorman.

Gorman said the conversations about the return of publics began early in the semester.

“Once we started rolling back other restrictions, the conversations about publics began,” Gorman said. “It really picked up in earnest about a month ago and I decided to put a working group together to try and hash out some of the big issues and concerns.”

In addition to the return of public parties, an email sent on Monday by Kevin Kirby, vice president for administration, announced that masks are no longer required anywhere on campus, indoors and outdoors, besides the classroom. Gorman said the change in mask policy will not affect public planning, as they will still be required to be held outdoors.

Brian Gibson, co-chair of the publics working group, said that the group was composed of college magisters, presidents, chief justices and socials. Gibson said that the goal of the working group was to consider health and safety concerns for the return of publics and find ways to address them.

“[The working group] started with laying out what our wishes were and what types of things we’d like to be able to see happen,” Gibson, senior associate dean of undergraduates, said. “But we set the tone from the very beginning that we actually don’t get to make the call on some of these things. The [Crisis Management and Advisory Committee] group would ultimately determine some of these things because we weren’t certain what would be allowed or what wouldn’t be allowed, nor do we understand where Omicron would be in a month.”

Because it’s been more than two years since the last public was held, Gibson said that thinking through the details has been challenging. He said that having input from student leaders was beneficial, especially from those who have attended publics in the past.

“That was very helpful, understanding what some of the things were that they went through, because there’s just not a lot of institutional carryover knowledge at this point,” Gibson said.

Christina Chen and Michael Wang, Wiess College socials, said that they have been seeking guidance from upperclassmen who have planned Wiess publics in the past. Chen said that planning so far has consisted of reaching out to a lot of people who have knowledge on planning large scale events like these, and working with the Will Rice College socials to plan a joint event.

“It might take more time planning this year compared to other years because obviously with COVID the publics haven’t happened so there is a dead time period where people haven’t experienced nor planned publics,” Chen, a freshman, said. “It’s not like last year’s socials just planned [Night Of Decadence], and they can give their expertise to us. Instead there’s a couple years removed so we have to reach out to current seniors … who have experience but from three years ago.”

Gibson said that there was a lot of conversation within the working group about how colleges would pair together to host publics. He said that they really wanted colleges to make those decisions.

“There are more colleges than there are weekends [left in the semester] so there would have to be a pooling of resources across colleges,” Gibson said.

Sarah Mozden, outgoing Sid Richardson College president, said that presidents helped socials pick their partner college, but they mostly wanted to give the socials an opportunity to decide themselves. Brown College and Jones College, Wiess and Will Rice, and Baker College and Sid Richardson will be co-hosting publics. According to Julia Engelhardt, McMurtry College prime minister, McMurtry will host the first public. Martel College will be hosting an outdoor sundeck party on Beer Bike morning, according to Gorman.

Hanszen College and Lovett College will not be hosting a public this semester. According to outgoing Hanszen President Morgan Seay, Hanszen government made the decision to not hold a public for several reasons.

“These include the cost of holding a large-scale public, the logistical concerns surrounding collaboration with another college, and the reduced time to plan the event,” Seay, a senior, said. “We’ve had great success with Hanszen only events and made the decision to host a Hanszen-only formal instead, but look forward to returning to public planning next year.”

Michael de Figueiredo, a Brown sophomore, said that the return of publics signals that things are reverting back to how they were pre-pandemic.

“It seems like this is one of the final big steps towards a return to normalcy on campus,”  de Figueiredo said. “Even with some restrictions, it makes me optimistic for the future of on-campus life.”

Avni Parmar, a Will Rice freshman, said she is really looking forward to publics and other campus-wide events.

“I feel like [publics are] a big part of Rice culture that I have missed out on because of the pandemic,” Parmar said.

Gorman said that the administration is increasingly hopeful that the university is at a point to more or less operate as it did before the pandemic, with some considerations.

“I’m happy that we are at the point that we can try these large outdoor parties, that’s Beer Bike, that’s publics,” Gorman said. “If they go well and if they look good … my expectation is that we would start the fall semester with y’all being able to have indoor publics again.”