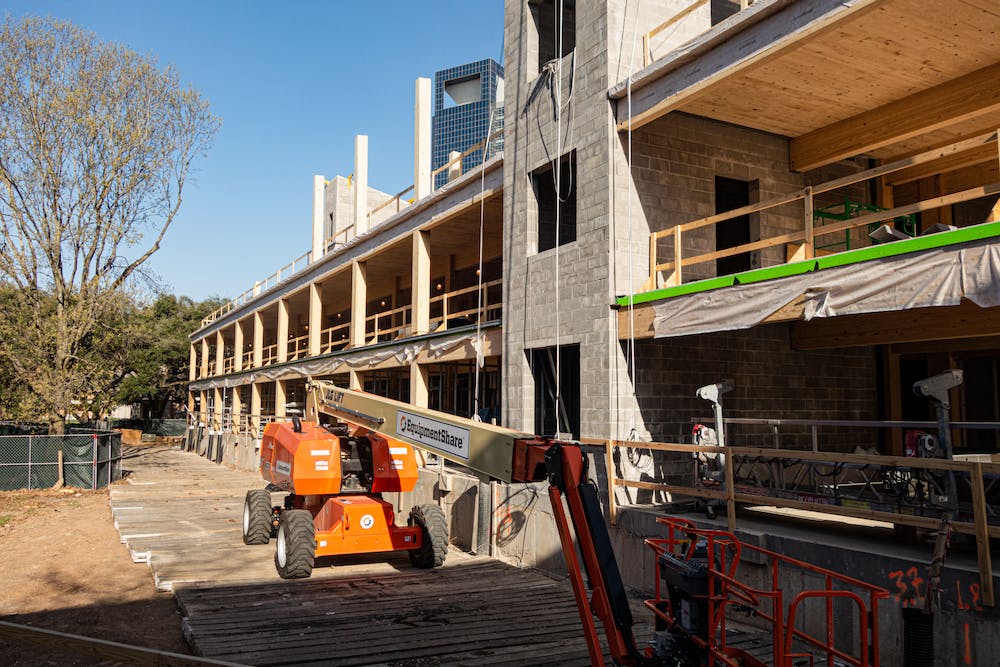 Supply chain issues have delayed the construction of the new wing of Hanszen College, according to an email from Dean of Undergraduates Bridget Gorman. Gorman said she expects construction to finish at the latest by winter break.

As a result, Hanszen students will occupy 74 percent of the old Sid Richardson building until construction is completed. Gorman said the delay involves a shifting arrival date for materials needed to complete the building.

“We remain hopeful that the situation will improve and the completion timeline will move forward, but right now it looks to be later in the fall semester before the new wing of Hanszen will be complete,” Gorman said.

According to Hanszen Chief Justice Alan Tapper, the Hanszen magisters and college coordinator were told that the building would be ready to move in sometime around early October.

“We also are not sure of the exact timeline because Dean Gorman’s email says that we would move in over winter recess,” Tapper said. “All we know currently is that those who are living in New Section next year, including me, are living in Old Sid at least for the beginning of the fall.”

Mark Ditman, the associate vice president for Housing & Dining, said the estimated completion date has been delayed by timber suppliers in Canada and their plant in Arkansas to a lesser extent.

Ditman said that an accurate completion date can not be certain until they receive the remainder of the timber structural elements.

“If the schedule for the remainder of the timber deliveries holds, the steering committee, which includes Hanszen leadership, should soon be able to communicate a completion date that all can plan around,” Ditman said.

Kaylah Patel, a current freshman at Hanszen, lived in Old Sid this past year and will be living at Old Sid again next year due to the delays in New Hanszen. Patel said she doesn’t really mind living in Old Sid.

“I feel like anything is better than Old Section [Hanszen],” Patel said. “If I could, I would just stay at Old Sid all four years because there is not anything inherently wrong with the building except for the few water problems and the fact that I doubt the carpet has been shampooed.”

Nasha Wanichwecharungruang, a junior at Hanszen, said she secured a single in New Hanszen during room draw but now must live in Old Sid because of the construction delays.

“I’m very mad about it. First, [the magisters] seemed to intentionally not tell us about the delay until after room draw. They waited until the morning after the last room draw to notify us,” Wanichwecharungruang said. “Moreover, [Housing and Dining] does not have a clear answer of when the building is going to be finished and they wont even let us break the housing contract without being fined. Also, the magister, the dean and people at Hanszen Cabinet all say different things about the finish date.”

Kenna Dixon, a freshman at Hanszen, also said she was frustrated with the lack of communication and opposing information being relayed to the student body from administration.

“I am a little upset that construction was delayed and that we weren’t informed until after room draw, because it probably would have altered a lot of others’ rooming decisions,” Dixon said.

Patel said that her main concern is with how the moving process from Old Sid to New Section will work, especially with the lack of current information.

“My only concern is how harsh the move out deadline [from Old Sid to New Hanszen] will be because I feel like I’ll be really overwhelmed if we are given short notice,” Patel said.

Even though the deadline to sign the housing contract was extended to Thursday April 7, Wanichwecharungruang said she is worried about being fined for breaking the housing contract to live elsewhere and feels as though she has to live at Old Sid even though  she does not necessarily want to. Wanichwecharungruang said. “ I don’t want to live in Old Sid. The living conditions are pretty bad. Sometimes the hot water doesn’t work. Sometimes we get brown water. Sometimes the AC or the heat is not working.”

Since the format of all of the rooms in Old Sid are four person suites, with each including two double rooms and one bathroom, everyone now has to find a group of four people to live with.

“Those in New Section singles are especially annoyed because they will have a roommate,” Tapper said.

Although there have been some delays to the construction, Ditman says that the goal is to give Hanszen access to the new building as soon as possible.

“The project team is actively looking for ways to improve the schedule without compromising quality,” Ditman said.