Meet historic women from Rice University’s past and present 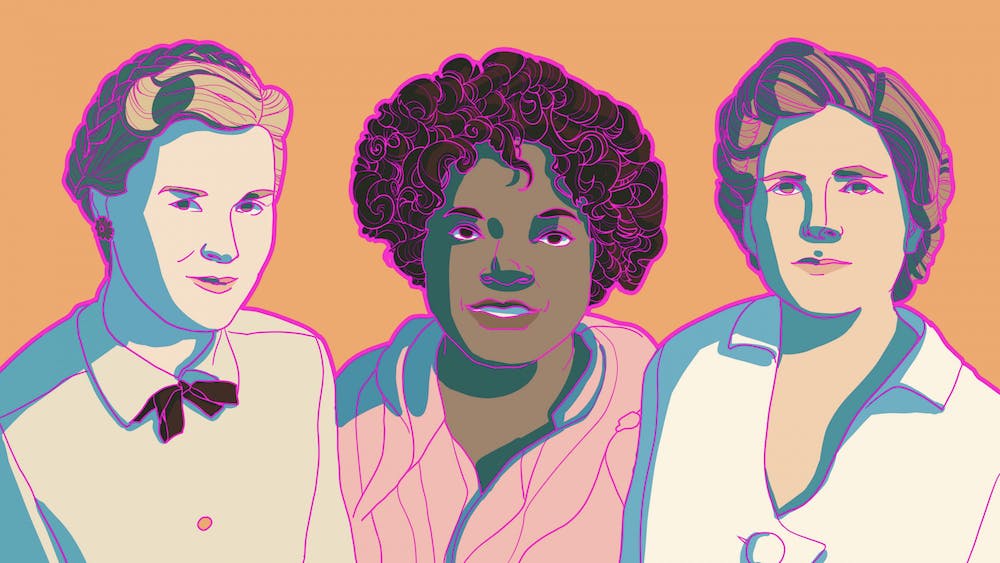 Although Rice’s student body was predominantly white and male when the university was established in 1912, it has grown into the much more diverse community it is today. In honor of Women’s History Month, get to know some of the female pioneers throughout Rice’s nearly 110-year history.

1912: Nellie Mills is the first woman to matriculate at Rice

Perhaps unbeknownst to some, Rice University — then called Rice Institute — was established as a coeducational institution, admitting both male and female students in 1912. However, the institute’s first class still consisted of mostly men. Nellie Mills, the first woman to matriculate at Rice, was among the minority of women enrolled in the first undergraduate class, according to Rice’s Digital Scholarship Archive.

Katherine Fischer Drew grew up in Houston and began studying at Rice Institute at the age of 16. Graduating in 1944 with a degree in history, Drew moved on to work in Rice’s registrar office before continuing her education through a master’s degree at Rice and a Ph.D. at Cornell University, according to the Woodson Research Center.

She later returned to Rice and became its first female faculty member. Starting out as an associate professor in the small but growing departments of History and Political Science, Drew spent much of her life at Rice. Eventually, she chaired the history department for ten years and served as the dean of the School of Humanities and Social Sciences.

Drew ultimately retired from Rice in 1996, after a long career as a student, professor, department chair and residential college faculty associate.

William Marsh Rice’s will and testament stated that only white students were allowed to enroll at Rice Institute. However, in 1965, Jacqueline Elizabeth “Jackie” McCauley became the first Black woman to be admitted to Rice’s undergraduate program, according to Rice News. The first Black student in Texas to earn a National Merit Scholarship, McCauley said that she chose Rice over other universities because she was determined to integrate the historically all-white university, according to Rice Magazine.

After interning at NASA the previous summer, McCauley entered Rice interested in the sciences but then switched to the social sciences. A member of Jones College, McCauley was involved on campus in the Young Democrats and Rice Players. While balancing school on top of extracurricular commitments like work with Volunteers in Service to America, McCauley ended up dropping out of Rice in her sophomore year, according to Rice Magazine. However, as one of only two Black undergraduates in her year at Rice, McCauley still played a part in making Rice a more diverse school and paving the way for other Black students to further their education at Rice.

1970: Linda Faye Williams is the first Black woman to graduate from Rice

Five years after McCauley was admitted to Rice, Linda Faye Williams became the first Black alumna of Rice University. Williams graduated in May 1970, alongside Theodore Marshall Henderson, the first Black man to graduate from Rice’s undergraduate program, according to the Woodson Research Center.

Williams, who grew up in Lovelady, Texas, went on to earn a Ph.D. and teach political science at several universities. She also served in the Congressional Black Caucus Research Group. Although she was successful in her undergraduate and postgraduate studies, her time at Rice was no walk in the park: she faced racial insensitivity even if the university was desegregated. According to Rice Magazine, Williams felt very lonely and lacked a sense of community in college. Nonetheless, she was often viewed as a mentor by her younger peers at Rice and by the students she later taught, according to the Woodson Research Center.

The daughter of Rice’s first philosophy professor, Katherine Tsanoff Brown started her time at Rice as an undergraduate at the age of 15. Graduating in 1938, Brown moved on to earn her M.F.A at Cornell University and study studio art in Seattle and San Francisco. After returning to Houston to teach art history at the Museum of Fine Arts, Brown joined the Rice faculty as the first art historian of Rice’s new Department of Art and Art History, according to the Woodson Research Center.

From 1973 to 1983, Brown served as the university’s first female Dean of Undergraduate Affairs, a role she held while continuing to teach art history. Throughout her time at Rice, she received numerous teaching awards and was tenured as a professor of art history in 1975, according to Rice’s Digital Scholarship Archive.

2007: Peggy Whitson (Ph.D ’85) is the first female commander of the International Space Station

NASA astronaut Peggy Whitson earned her bachelor’s degree in biology and chemistry from Iowa Wesleyan College in 1981 before completing her Ph.D. in biochemistry at Rice in 1985, according to NASA.

After spending 665 days in space throughout her career, Whitson currently holds the U.S. record for most cumulative time in space. According to NASA, Whitson announced her retirement in June 2018.

Marie Lynn Miranda took on the role of Rice’s first female provost in July 2015, according to the Woodson Research Center. She helped guide the university during Hurricane Harvey in 2017 and subsequently worked to establish the Hurricane Harvey Registry, which aimed to improve future responses to natural disasters by studying the health and housing effects of the storm. As a statistics professor with degrees in mathematics and economics, Miranda conducted research on environmental health with a focus on the impact of the environment on children’s health and wellbeing.

In June 2019, after four years as Rice’s provost, Miranda stepped down due to family illness and later served as provost at the University of Notre Dame.

2022: Germaine Franco is nominated for the Academy Award for Best Original Score

The 2021 Disney animated film “Encanto” was wildly successful among audiences and critics. The score, written by Rice alumna Germaine Franco, is nominated for the Academy Award for Best Original Score. Franco, a graduate of the Shepherd School of Music class of 1984, has worked on the music of other popular movies like Disney’s “Coco.”

“Encanto” is the first Disney animated feature film to be scored by a woman, and Franco is just the sixth woman to be nominated for the ​​Academy Award for Best Original Score, according to NPR. Franco is not only one of the few women in an industry dominated by men but also one of the very few Latina composers. In 2016, Franco became the first Latina composer to join the Academy of Motion Picture Arts and Sciences music branch, according to Billboard.