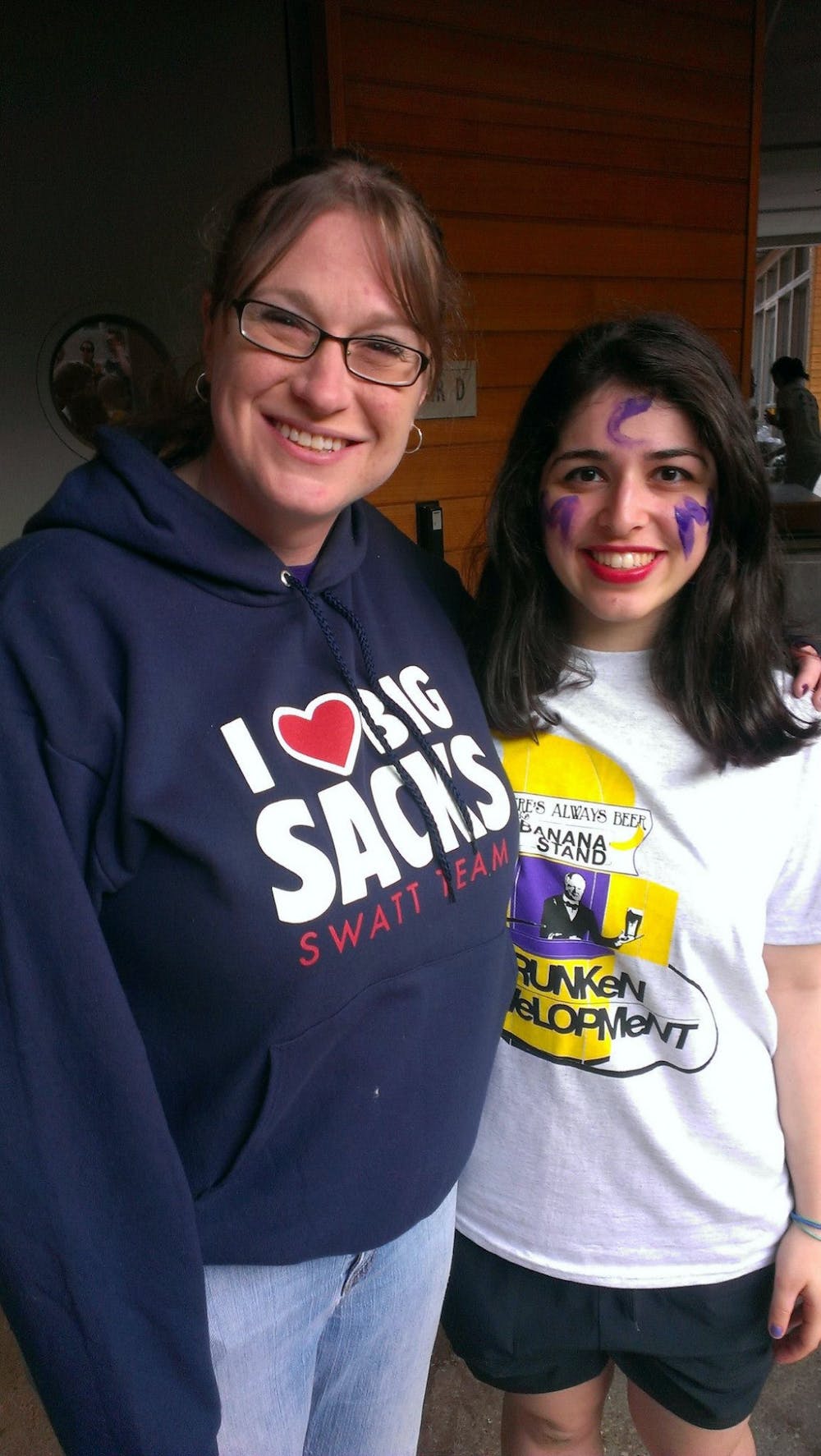 Director of Student Media Kelley Lash passed away on Feb. 21. She was 46 years old.

After graduating from Georgia Southern University with a double major in English and Journalism, Lash worked as director of student media at Methodist College in North Carolina. She later moved back to Georgia, and after holding multiple positions there, Lash joined Rice as director of student publications in 2010.

According to Dean of Undergraduates Bridget Gorman, Lash had a vision for a department united to support all modes of student media, so in 2015 Rice integrated KTRU with the Thresher and Campanile and appointed Lash director of student media. She then oversaw all student media platforms.

Fenton McGonnell, Lash’s father, said Lash was a deeply passionate person, whether for the journalism students she oversaw or for the Texans football team.

“We have four daughters who are four of the most amazing women I know,” McGonnell wrote in an email to the Thresher. “Their mother and I tried to instill in them the attitude [that] they could anything they wanted to be. And they have made us proud.”

Andrew Lash, her husband, said whenever anyone was down, Lash had the superpower to bring them right back up.

“Kelley was fierce, enduring, lasting, caring, creative,” Andrew Lash, customer relations assistant at the Gibbs Recreation Center, wrote in an email to the Thresher. “She was always creating delicious cupcakes or [baking] to ensure the kids had a sweet treat to get them through the week. The best way to describe it was from her latest favorite show. She was a real life Ted Lasso — sweet, caring, positive and always there for anyone who has ever met her, especially her babies (students).”

KTRU station manager Chloe Liebenthal said Lash gave her a “believe” sticker from Ted Lasso that she immediately put up in her room.

“Over the past week, whenever I’ve been feeling really awful, I’ve just kind of looked at that sticker where I put it up on my whiteboard and just thought about how much she cared about trying to inspire us and make us believe in ourselves,” Liebenthal, a McMurtry College junior, said.

Susann Glenn, director of communications for administration, said one thing she loved about Lash was that she would always stop whatever she was doing if someone needed her.

Associate Dean of Undergraduates Catherine Clack said Lash was a ray of sunshine, even on her worst days. Clack said her first memories that always come to mind involve Lash’s love of books and their shared love of the Backstreet Boys.

“We argued on the way to one of their concerts about Fifty Shades of Grey (the books),” Clack wrote in an email to the Thresher. “I found it easy to set aside my feminist sensibilities for smutty summer reads, but Kelley was just appalled. It was a lively, fun and heated debate, and one that I cherish. Of course, once we hit the concert, it was over and done and we were able to share a love of their music with glee and ease.”

Liebenthal said Lash always prioritized friendship and caring for and supporting each other, even when times were tough.

“[She was] a true friend,” Liebenthal said. “Somebody I could always go to for support, for friendship, and for advice, who was always such a warm and caring presence and did so much to support all of us. It feels like she gave us all such a beautiful gift.”

Campanile editor-in-chief Juliana Phan said the Campanile would not exist without Lash. Phan said Lash was one of the few adults who always respected her and advocated for her when she needed support.

“When things got more difficult and it was just the two of us doing things for the Campanile, she was willing to do so much to make sure I was still able to enjoy the experience,” Phan, a Lovett College sophomore, said.

Lash was also heavily involved with the College Media Association, serving as president from 2015 to 2017. Last year, she received CMA’s Ron Spielberger Award.

Lash’s impact on the CMA was immeasurable, according to Steven Chappell, current CMA treasurer.

“She helped spearhead and launch our new advisor training program … and she just finished a few months ago running a committee to completely update and revise our bylaws that [will] shape CMA for years to come,” Chappell said. “I would wager to say, most if not all of the current board members would not be on the board today were it not for Kelley. They all had personal connections to her.”

Current CMA President Chris Whitley said that Lash was a one-woman cheerleader for the CMA.

“She got involved in everything,” Whitley said. “She loved sharing stories with friends, but she was just as likely to introduce herself to the new adviser awkwardly standing in the corner who didn’t know anyone … Her loss is felt beyond Houston. Advisers all around North America knew Kelley and are grieving right now.”

Whitley said he remembers the exact day he met Lash.

“It was October 27, 2011, in a hotel bar in Orlando during CMA’s national convention,” Whitley said. “I know the day because we were watching Game 6 of the World Series where my beloved Texas Rangers blew a chance to win the title. Even though I watched the game in agony, she still made me laugh.”

Chappell also said anyone who knew Lash knew she loved tacos. He said one memory about Lash that always comes to mind stems from a CMA summer convention in Minneapolis.

“We had just finished a day of sessions, and somebody at the conference said, ‘Hey, there’s a tequila bar down the street that has buy one get one free tacos,’ and Kelley sat straight up and said, ‘Buy one get one free tacos? I think we need to go there,’” Chappell said. “Most of us went because, tequila, but she went because, tacos. And I think she ordered one of every style taco that was on the menu just to ensure she got to taste something, and shared them with the whole table … and Kelley’s just sitting there tasting taco after taco and having the time of her life.”

Bradley Wilson, managing editor of College Media Review, said he has taken thousands of pictures in his nearly-twenty years with the CMA, but couldn’t find a single one of Lash.

Rachele Kanigel, the CMA president preceding Lash, said Lash was the embodiment of all things CMA — friendly, supportive and a champion of student press rights.

“Now, when I’m unsure what to do or how to act in a situation, I often find myself asking, ‘What would Kelley do?,’” Kaniegel said. “When I do that, I know I’ll come up with the right answer. I hope to be able to channel my inner Kelley for the rest of my life.”

Lash was also an active McMurtry College associate. Brad Blunt, a fellow associate at McMurtry, said he would best describe Lash as unapologetically nerdy, generous and someone who thought the greatest reason for celebration was the success of others rather than her own.

“She knew the birthday of every student in an O-Week group and what their favorite flavors were, and when one of those students was celebrating a birthday, Kelley would make special cupcakes from scratch featuring the student’s favorites,” Blunt said. “Being a good associate is more than just baking though, and I think her greatest impact was to give the students the assurance that there would always be at least one person in their corner, no matter what.”

Glenn said Lash was a fierce advocate for her students, friends and family. Wilson also said Lash was one of the most vocal advocates for student journalists he knew, and said that’s how she would want to be remembered.

“A lot of college media advisers find themselves at some point fighting for the First Amendment,” Wilson said. “I’d say Kelley did that almost every day.”

In her most recent Tweet, Lash voiced her support for The Battalion after the A&M administration demanded the student newspaper cease printing.

Eric Stone (Wiess ‘19), the 2018-2019 Thresher opinions editor, said he wouldn’t be where he is today without Lash’s relentless positivity, encouragement and passion for developing young journalists.

“[Lash] taught a half-day seminar on the basics of journalism while I was with the Thresher,” Stone said. “It was a reporting 101 class that didn’t exist at Rice, and it went far beyond her job description. I still think back on the lessons she shared that Saturday morning, and I repeat them to the interns and reporters I now mentor.”

Several Rice student media alumni shared messages and remembrances of Kelley as a tribute to her impact.

KTRU will be dedicating their outdoor show on March 5 to Lash’s memory and all proceeds will go to Lash’s family. KTRU has been talking with Lash’s family to determine the best way to honor her moving forward, according to Liebenthal.

“We designed a special t-shirt with some of the things she really loved,” Liebenthal said. “Everybody who ever went to her office knew that she loved Funko Pops, and she had a tattoo … of a symbolic symbol of protection. And so we made this t-shirt with a bunny Funko Pops with Kelley's tattoo. So we're just trying to go forward in a way that elevates her memory in the way she deserves. None of this would have happened without her and we want to make sure everybody knows that.”

Gorman and Glenn said Lash was really excited about the new student center and the Student Media space.

“I was talking to the project manager over the student center, we're talking about Kelley, and she said [Lash] was happy about being in the basement, like no one has ever been happy about being in a basement but Kelley was excited because this space is going to really meet their needs,” Glenn said.

Multiple colleagues and friends of Lash, including Whitley, Gorman and Glenn, said they will always remember her smile.

“My first impression of her was her smile,” Glenn said. “I mean, she always had a smile on … her aura was all about, ‘How can I welcome you, how can I make you feel comfortable?’”

“She led her students to numerous national awards, and she was a beaming mother to all of them when they did,” Whitley said. “Rice will miss her. We all will.”

Lash is survived by her husband and her daughter, Riley Callaway. A memorial service for her will be held March 5 at 1 p.m. at Pittman Park United Methodist Church in Statesboro, Georgia.