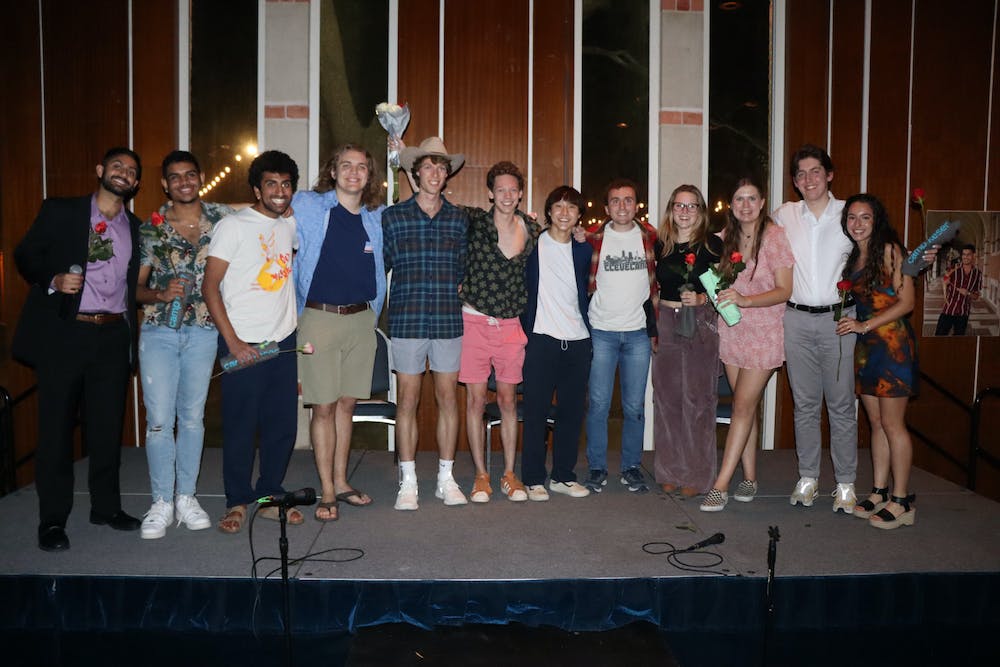 In the annual fundraising event hosted by Camp Kesem, McMurtry College sophomore Teddy Gilman was named “Rice’s Finest.” Ten colleges were represented that night — Jones College did not have a contestant this year — in the competition previously known as Mr. Rice. It was renamed this year to be more inclusive of all gender identities, according to “Rice’s Finest” coordinators Kaitlyn Crowley and Ambreen Younas.

“Though the event has historically only had male contestants even though anyone could run, we loved their idea of making the competition more inclusive on both the college-wide and campus-wide levels, and decided to change the name of the campus-wide event as well,” Crowley wrote in an email to the Thresher. “This is definitely something we plan on keeping for future years in order to be more inclusive of contestants of any gender identity.”

Younas said they were inspired by Duncan College, whose Culture and Arts Committee renamed their competition last fall from “Mr. Duncan” to “Duncan’s Finest.”

“Kaitlyn and I then decided that we wanted to change the name of the entire campus competition since we had always intended for it to be open to people of all gender identities anyways rather than just for men, although this has not been properly advertised in the past before,” Younas wrote. “The change in the name is one of the ways that we are trying to be more inclusive along with other changes, such as certain changes in our programming.”

Gilman said he enjoyed being a part of “Rice’s Finest” and helping contribute to the cause.

“It was so incredible to see everyone’s acts and I was so beyond impressed with how well everyone did,” Gilman said. “[Winning] was a great honor, especially because the competition was very fierce, and I was really glad to bring the title home for all the folks rooting for me at McMurtry.”

Gilman and fellow contestants competed in a talent portion, fashion show and Q&A session on the evening of March 4, where Leighton Less from Baker College and Julie Moquin from Lovett College also took home awards for “Best Walk” and “Best Talent,” respectively. For her talent, Moquin performed a rendition of John Denver’s “Take Me Home, Country Roads,” with lyrics changed to be specifically about Rice’s “pebble paths.” Alongside Sara Davidson, a freshman from Brown College, Moquin is one of the first non-male contestants in the event.

“Traditionally, Rice’s finest and the individual college winners were given to a senior, male student,” Moquin, a freshman, said. “I was the first female freshman to win Mr. Lovett in the history of Lovett and it felt great to be one of the firsts. I’m honored to be part of this inclusivity movement.”

“This soon-to-be mechanical engineer who once dreamed of being a pop star got to live out his childhood dream for approximately five minutes and I’ve never been more proud of myself,” Less, a sophomore said.

Crowley said they were excited to be a part of bringing the show back to an in-person format.

“We were both at that event two years ago [in spring 2020] and had so much fun seeing everyone come out to support their friends and [Camp] Kesem, so it was both daunting and exciting to have the opportunity to recreate that experience for everyone again this year,” Crowley wrote. “We definitely had to work hard this semester on the logistics of the event and Rice’s COVID guidelines to make sure everything ran smoothly, but it was so rewarding to see how much fun the contestants and audience had.”

Younas said they started planning for Rice’s Finest last semester, after each of the participating colleges had selected their representing student.

“In order to properly advertise the event … and to create solid programming, we wanted to make sure that we could get to personally know each participant,” Younas wrote. “For example, we had them submit fun facts about themselves, favorite pickup lines, hobbies, etc. We personally met with several contestants, and Camp Kesem Rice’s Alumni, Marketing, and PR team helped us conduct photoshoots with all the contestants. We also had several meetings and dress rehearsals with everybody.”

The event raised roughly $2.4 thousand, according to Crowley and Younas, which included money raised from ticket sales, concessions and profits from posters of each contestant that were auctioned off during the show.