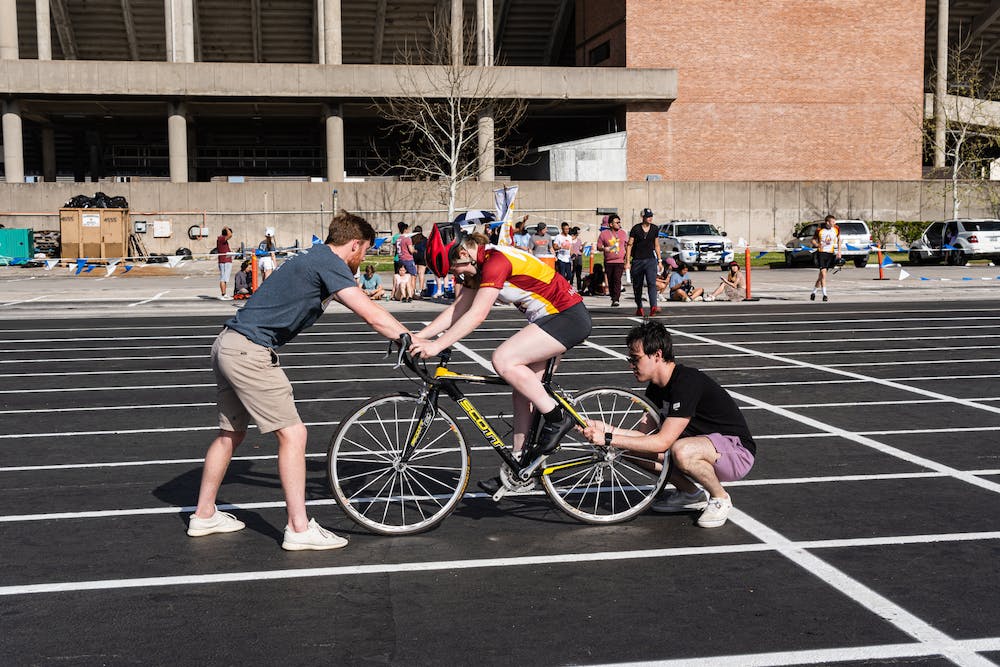 The Thresher asked students from across campus for their thoughts, predictions and preparations for the full Beer Bike since 2019. Here are some things they said.

“We’re a pretty well-oiled machine. Guys one through fifteen are all ready for Saturday … We think the beauty of chugging is that really anyone can do it … You can definitely tell the campus is kind of buzzing in a way that hasn’t been happening in a long time … We’re ready to go.” -Ben Thomas, Duncan chug team captain

“I’m really proud of everyone who has been practicing for so long. Hanszen really loves Beer Bike, and a lot of people put themselves out there. I’m just as proud of everyone who has tried to chug and ended up with water all over them as the people who are gonna be on the team … I’m very excited to support our bikers because they also work very hard, so we want to match their effort and give them a good support to rely on.” -Katie Bablak, Hanszen chug captain

“We’ve got some great personalities on the team. While there are people like myself whose athletic ability is doubtable, there are other people who are amazing … I don’t think we’re going to win Beer Bike. Teams like Jones and Hanszen exist. They got posters of their bikers in the commons. I’m confident, I think we’re gonna have the most fun at Beer Bike. We might not win, but we’re gonna have the most fun… I can’t wait until Saturday. I’m so excited. I have two exams this week. By Saturday I’m gonna be so ready. -Jonathan Makhoul, Brown biker

“I think Beer Bike is anyone’s game, and our chances this year aren’t higher than last year. So it will all come down to execution on race day.” -Mahmoud Al-Madi, Jones Bike captain

“I’m so tired because I had to get up for class pretty early today and all the events are super late here. [There’s] definitely a lack of sleep this week … I’m looking forward to attending the races in person mainly because last year seeing it on a TV was definitely not the kind of experience I think Beer Bike is supposed to be. Being together and cheering and screaming for your college is such a big part of what it’s supposed to be … I think we actually have a shot at not coming in the last place this time.” -Ben Smiley, Wiess sophomore

“Definitely we’re very hyped from last year, and I think that inspired a lot of new girls to join our team this year. Majority of our team is new, so it’s nice been training them … We’re super excited to get out there again and have a full team of eight … It’s my last Beer Bike. It’s kind of sad. I’m a little scared because I think it might turn into a Beer Run, and then all four years would be abnormal Beer Bikes. But I’m not gonna say anything about rain yet and [will] just hope for a Beer Bike. I’m super excited. McMurtry always does a great job of organizing the day and hyping up the Bike Team … Look for the bananas on the track.” -Hannah Boyd, McMurtry Bike captain

“We had a really, really rough start. A lot of injuries this year. But we’re bringing it back and I think by now we’ve put together a really good team … I’m super excited, except that the track is shut down right now. Hopefully it gets fixed in time for us to not have a dangerous race.”  -Truman Archer, Hanszen bike captain

“All I can think about is my midterm on Thursday so I haven’t been giving Beer Bike much thought. I don’t even know what day Beer Bike is. Is it Saturday? … I was looking forward to it. It’s more of a mindset of ‘when it happens, it happens,’ and I’ll go. But I’m really stressed about midterms.” -AJ Kim, Wiess freshman

“We’ve got a lot of energy on the team. We’re just gonna go out there and crush it.” -Carissa Witt, Brown biker

“I’ve been going to most of the Beer Bike hype events … I feel like we’re gonna win because our college has been super motivated about practicing … I think we’re going to make the most water balloons again. We’re gonna destroy the other colleges. It’s not even going to be close. They might as well not come.” -Subash Jagadeesan, Will Rice sophomore

“I didn’t attend a single practice. But I’m really good at it … I’m a little excited. But I’m hoping it doesn’t interfere with my workout schedule.” -Sawyer Archer, Hanszen chugger

“I know it’s happening. I don’t really like the Baker T-shirts, and I didn’t really want to buy one, and so I’m not going to Beer Bike.” -Saoirse Disney-McKeethen, Baker junior

“All my favorite traditions are coming back, and I'm excited to share them with everyone and ... pass on the knowledge and traditions ... We got new jerseys, so that’s cool. Designed them myself, actually. Hopefully we’ll be looking fly out there, get that extra boost.” -Amanda Suarez, Martel bike captain

“We’re excited to just get out and race. It’s about time.” -Jonathan Lloyd, Will Rice Bike captain and water balloon filling committee head