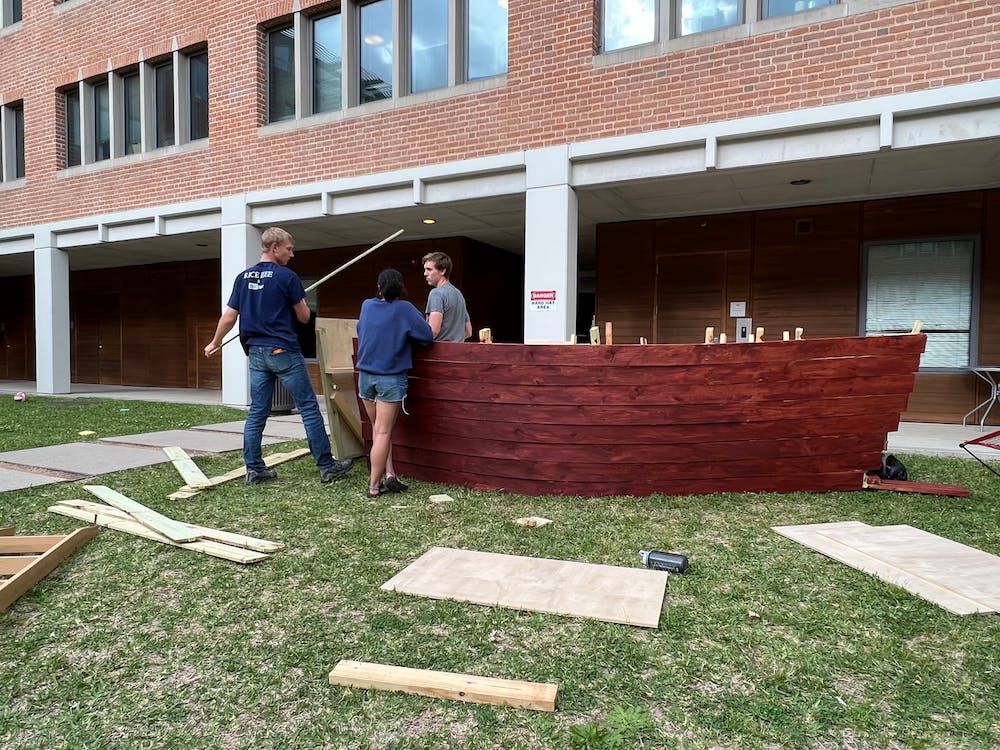 In the week leading up to Beer Bike, each residential college hosts a variety of events for their students centered around their respective themes. The Thresher spoke to the Beer Bike Coordinators at each college to hear about their plans for the week.

Baker College sophomore and Beer Bike Coordinator Ronnie McDonald said that Baker celebrations began this week with the moving of their parade float, a hell car, into their quad. Painting and decorating the car throughout the week is a bonding event for the college.

According to McDonald, Baker has planned secret jacks for the week. On Monday, Baker jacked Martel by driving through their sallyport and parking in their quad in reference to the joke that Martel is a parking lot and not a residential college. Baker hosted a combined FITQ with Martel afterwards.

“I think that I’m most excited for Baker to stay up all night before Beer Bike. Most of the college participates but for those that do sleep prior, we have all the seniors wake them up before the day’s activities,” McDonald said. “It’s overall just a really fun vibe.”

Beer Bike Coordinator and Will Rice College senior Michael Katona said that the two-year lapse in Beer Bike due to COVID-19 has allowed for the creation of new Will Rice traditions. Will Rice is renaming their Willy Week to Sweep Week in reference to their status as the only college that has ever swept Beer Bike by winning all three Beer Bike races (men’s, women’s and alumni) in the same year.

Katona said Rice administration has helped preserve most of Will Rice’s Beer Bike traditions while balancing student safety. According to Katona, work on building the Will Rice float for the parade has been sporadic since right before spring break. Will Rice is hosting cross-college events with Sid, Wiess, Lovett and Baker throughout the week. Katona said that he is most excited for the campuswide festivities on Beer Bike Morning.

“We haven’t had those since I was a freshman, and it will be fun to watch three fourths of Will Rice experience that for the first time,” Katona said.

Hanszen College: Winnie the Brew and the Hundred Tankard Woods

According to Hanszen College junior and Beer Bike Coord Hemish Thakkar, Hanszen’s planned Beer Bike celebrations include a waterslide, a mechanical bull, karaoke, hair dyeing and dodgeball. Hanszen has been preparing to host their annual campus-wide color celebration, where people throw colored powder at each other, on Beer Bike morning.

According to Thakkar, Hanszen has been building their float for the parade all week and plans to have it finished by the end of this week.

“I am personally most excited about getting people to come to our events to spend time with each other and create lifelong memories,” Thakkar said.

According to Wiess junior and Beer Bike Coord Charles Lussier, Wiess’s Beer Bike float is supposed to be finished by Thursday.

Jones College is known to take Beer Bike seriously – a sentiment shared by Jones junior and Beer Bike Coordinator Mary Brady. She said that this passion is reflected in their new name for the week before Beer Bike: Winning Week.

“The name ties into Jones’ culture of always winning in everything we do, and it’s really cool to be setting precedents that will be followed for years to come,” Brady said.

The college-wide game of assassins has facilitated more connections among Jonesians, as well as promoted hype for Beer Bike, according to Brady. She said seeing people carrying their spoons across campus and witnessing chases has been amusing.

Brady said that planning the North college bonding events has been especially important because they were first held in 2019, at the last pre-pandemic Beer Bike week.

“It’s been interesting to coordinate an event between five residential colleges, but I think it’s going to be really rewarding in making sure that we can keep this fun event alive,” Brady said.

Brown College: The Thirsty Games: May the Beer Be Ever in Your Hand

Brown College’s Hunger Games-themed Beer Bike features a dodgeball game versus Martel on Wednesday and Brown’s Best: The Capitol Fashion Show on Thursday. Their new name for the week before Beer Bike is Maggie Week.

Beer Bike festivities at Lovett include a midnight toast with champagne and Texas toast, tie dying a trivia and dodgeball tournament, multiple Fun in the Quads, a ping pong tournament, karaoke with s’mores, an inflatable obstacle course, beer debates and an alumni get-together.

Senior Beer Bike coordinator Marykathryn Charles said that no official jacks are planned for this week but that some students are trying to coordinate unofficial ones.

According to Charles, Lovett doesn’t usually participate in the float parade, instead hosting a mud fight.

“After the water balloon fight Lovett comes and pours out all of the water and makes a big mud pile and wrestle each other in that,” Charles said.

“We were originally planning to have one [this year], That’s why we didn’t build a float, [but] we were told that it shouldn’t happen.”

Charles said that she is most excited to participate in Lovett’s karaoke and s’mores event as well as to see the payoff of the work she and her fellow Beer Bike Coordinators have invested.

“I’m excited to see everything we’ve been planning for come to fruition because we’ve spent so much time and stress planning for this,” Charles said.

Wei said that they have planned multiple jacks, a day of water themed events, an alumni tailgate, beer debates, an Orc Raid and Orc Rave. The Orc Raid, which involves running around in paint and asserting dominance, is followed by the Orc Rave dance party. Call said that she is excited to introduce younger Sidizens to Beer Bike celebrations so that they can continue carrying on the tradition.

“We’re all excited to set the best standard for years to come at Sid,” Wei said

The massive build on Martel College’s sundeck is their “stationary float.” Martel will also have a race startline arch featuring Lakitu holding up a bike.

Martel has a lot of cross-college interaction in the week before Beer Bike, according to Liu. This year, the North colleges come together for a capture-the-flag competition and block party.

“We also have some pretty cool Martel specific events, like a glow in the dark event at night with loud music and colorful lights,” Liu said.

McMurtry College: Mr. Worldwine: Been There, Chugged That

Alyson Resnick, a McMurtry College senior and Beer Bike coord, said that McMurtry Orientation Week is special due to the excitement that Murts have for the week before Beer Bike. She said that they gather in a group every day until the big event, and the quad has music, food, bracelet making and painting all week long.

McMurtry hosted a “Monday in Miami” and a beach day with a water slide on Tuesday. On Thursday, there will be a “Mechanical (pit)Bull.” McMurtry’s stationary build features Mr. Worldwide, American rapper and singer.

“Come to our quad to see our 16-ft tall Pitbull tower, complete with other small-Pitbull themed builds: a Holiday Inn sign, a Ke$ha can crusher, a Kodak camera and a huge wooden 305,” Resnick said.

Duncan College’s float, which is expected to be finished late this week, will resemble the Flying Dutchman’s ship from Spongebob, according to Eric Webb, a Duncan senior and Beer Bike coord.

Anthony Insalaco, a Duncan sophomore and Beer Bike coord, said one of the most unique Duncan traditions is the Eternal Flame.

“The flame represents the spirit of Duncan; through the power of the Sungod, the flame stays lit all week,” Insalaco said.