Baseball drops 2 of 3 to Lamar in first home series 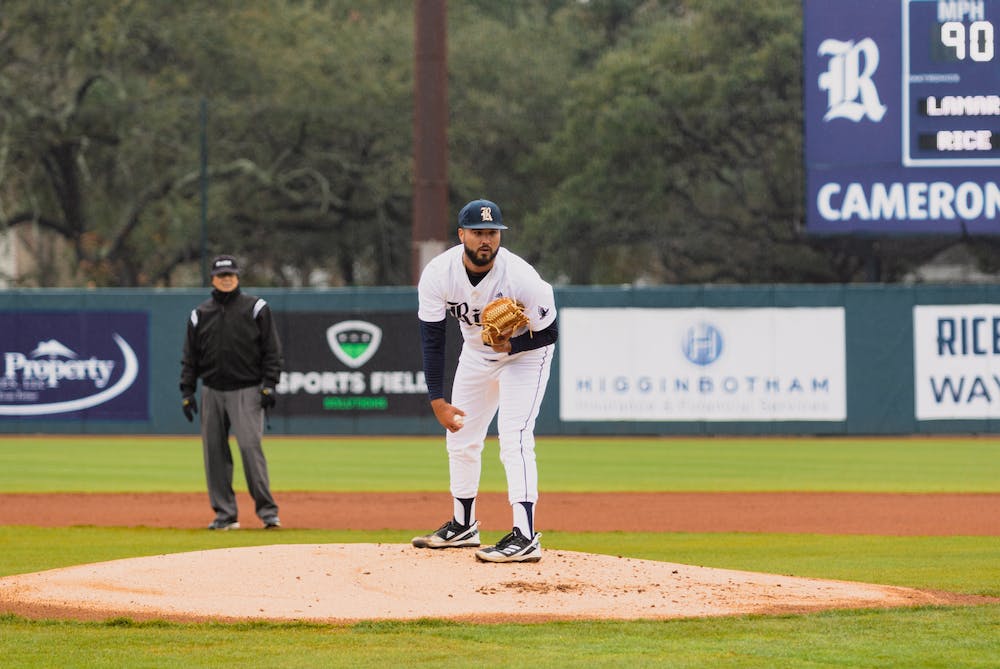 Rice baseball lost their first home series of the season last weekend, with Lamar University coming into town and taking the first two games of the series, before the Owls avoided the sweep on Sunday afternoon to claim their first home victory of 2022. Their record now sits at 2-5 on the season.

The Cardinals took game one from the Owls by a score of 12-6 on Friday night. Rice forced extra innings on Saturday but ultimately lost that game 8-6 in 11 innings. The Owls were down to their final five outs on Sunday before senior infielder Austin Bulman hit a grandslam over the 400 foot marker in right-center field that gave the Owls the lead en-route to an 8-6 victory. According to Bulman, the team had been in position to capitalize on base runners all weekend.

“We were piecing together base runners [all game], we just needed that big hit,” Bullman said. “We just need to get that runner across here and there, it’s been [that way] all weekend.”

The sentiment that Rice was close to taking the series was common at Reckling Park on Sunday afternoon. According to head coach Jose Cruz Jr., had a few plays gone the other way, the Owls might have emerged with two victories instead of one.

“We were close to winning the series, in my eyes,” Cruz said. “Both teams were getting after it [on Sunday], they put good at-bats together and played good [defense]. [Lamar] is a very fundamentally sound team, very well coached … We just got a pitch, and a hit, at the right time.”

The bats were alive all weekend for the Owls, as they put up 20 runs on 30 hits over the three games. Sophomore outfielder Guy Garibay Jr. continued to impress with his first and second home runs of the season, and freshman infielder Aaron Smigelski put together six RBIs on five hits, including his first career home run. According to Cruz, hitting becomes contagious after one guy in the lineup starts to find his groove.

Smigelski, who didn’t start any of the games in the first series against No. 1 University of Texas, Austin, has quickly cemented himself into the Owl’s starting lineup. He managed two pinch-hit singles in the UT series and has been in the starting lineup ever since, batting cleanup in the second and third games against Lamar. According to Bulman, the team is excited about Smigelski’s potential.

“Smigelski’s been fun to watch so far,” Bullman said. “We keep calling him our secret weapon, he’s been doing great things for us.”

Despite the offensive successes, the Owls have struggled in the field, both defensively and on the mound. The team has 11 errors through seven games, and have given up at least six runs in every game except for one. Their team ERA sits at 8.27 and they are allowing nearly two baserunners per inning. According to Cruz, though there are some defensive fundamentals that need fixing, he is satisfied with how the pitchers have performed thus far.

“Our team is starting to come together in many ways, but we still have a ways to go,” Cruz said. “There are some things to sharpen up on the defensive side, but I think our pitching competed pretty good. We’re pounding the zone pretty well.”

​​“What I saw [from Lamar] was a few doubles, but a lot of jam-shot hits; hoppers through the infield, balls hitting the base, just unlucky in many ways,” Cruz said. “[That created] extra pressure for our guys when they made great pitches and just weren’t rewarded.”

Sophomore pitcher Matthew Linskey, who closed out the game for the Owls on Sunday, said that the pitching staff has been attacking the zone and are starting to turn a corner in terms of their performance.

“We’re really starting to piece it together,” Linskey said. [We’re] attacking the zone and making them have to hit the ball.”

The Owls now look ahead to a mid-week matchup against Baylor University on Wednesday, and a series against Harvard University next weekend, and a matchup against Texas Tech University the weekend after that. According to Cruz, winning the final game against Lamar allowed the team to breathe heading into the upcoming stretch of games.

“We’re slowly getting better, but it’s going to take a little time to get everybody's mindset right,” Cruz said. “Getting a victory [this weekend] is nice momentum heading into this next week … We have some tough games coming up.”