Andrew Yang speaks at Rice on state of U.S. politics and democracy 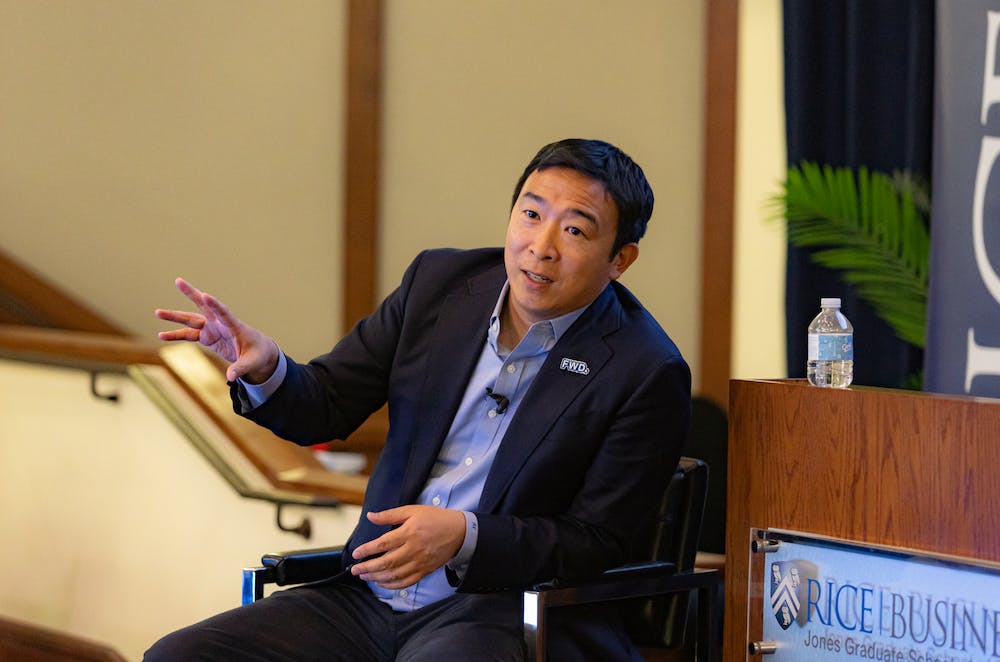 Andrew Yang discussed the state of U.S. politics, democracy and the benefits of a third political party at McNair Hall on March 28. Yang visited Rice as a part of the Presidential Lecture Series.

President David Leebron introduced Yang as an entrepreneur, author, philanthropist, nonprofit leader and former US presidential and New York City mayoral candidate, as well as a student in his torts class at Columbia Law School back in 1996. Yang joked that he was perhaps the last or second to last person in the class that Leebron would have thought would run for president.

“When I graduated from Brown, I had no political aspirations,” Yang said. “I was the son of immigrants, still am, and we did not discuss American politics at my house … It was only after I embarked on the nonprofit journey in 2011 that I started to think about some of the bigger problems that were affecting this country.”

Yang pointed out some of the urgent issues Americans face — staples of American life such as education, healthcare and housing have risen while Americans’ incomes stay the same, and political polarization fueled by the mainstream media rapidly increases, while local journalism dies.

“My friend Ezra Klein said very, very correctly, ‘partisanship is the new acceptable form of prejudice,’ where 62 percent of Americans want a third party and 60 percent of Americans say both parties are out of touch,” Yang said. “You have this very, very robotic system where if you’re in office, you have a great chance of winning, in large part because most of the districts are gerrymandered to be either very liberal or very republican.”

Yang said that our current system will only inflame people against their opposite political affiliation while things degrade in people’s communities, which is why he supports ranked-choice voting and having more than two political parties.

“If you wanted a more resilient system, you would categorically have multiple parties. Every other society has figured this out, except for ours,” Yang said. “How you get from two to five parties is the question of this age. So this is my effort, the third party initiative — the Forward Party.”

Responding to Leebron’s question on why he believes a third party will prevail when a third-party candidate hasn’t won the presidency since the Republican Party became a major party in the late 19th century, Yang said that he is confident because he’s aware of what his competition is.

“At this point, 57 percent of people don’t want Trump or Biden to run, and I’m going to suggest that they’re the most likely nominees for the two major parties. So if you were to have Donald Trump versus Joe Biden the sequel, the rematch, combined age 158, both of the parties are creaky or worse,” Yang said. “I’d love it if our democracy was thriving … and people felt like ‘oh, yeah, this represents me.’ But instead, you have the opposite … So in that context, if you have a credible third party candidate, I think that they can be competitive.”

“We don’t think about him as a third party candidate, because it was the first run of the Republican Party,” Yang said. “But Abraham Lincoln won in 1860, with 39.8 percent of the vote …  He actually is the closest thing you have to a model for what’s happening right now.”

Yang said that the fear that a third party will take away votes from people’s preferred winning party is a real concern.

“Let’s say in the 2024 race, Trump is the Republican nominee … I personally would not support anything that increases the chances of Trump winning,” Yang said. “And so to the extent that I will be supporting third party candidates will be someone who takes more from Trump on the other side. That’s my perspective … In my mind, Trump is a catastrophic threat to a functioning democracy.”

Paul Reinhardt, Sid Richardson college ‘76, who identifies himself as generally a Republican, said that he came to this event to force himself to listen better.

“I listened to [Yang] in some of the debates,” Reinhardt said. “I thought he had a new edge to it … He’s still getting in there. He’s still in the mix. You know, that’s great. He didn’t just kind of fizzle out and drift off.”

Helen Pu, a Baker College senior, said that she never delved deep into Andrew Yang and his campaign outside of basic facts about him and a few of his really funny Tik Toks before this event.

“Andrew Yang talked on many of the concerns that I personally have wondered about, and I think he is heading in the right direction to address them,” Pu said.

Jackson Davis, Will Rice College ‘21, said that he thinks Yang seems to be a stand-up, reasonable and transparent guy who’s in it for the right reasons.

“After seeing him, like about 15 feet away from him, I think that comes off even more in person,” Davis said. “It’s also very interesting to see his up and coming plans… I mostly was following him during the presidential election when he had the most coverage and the most notability, but I didn’t know about the Forward Party before this.”

Davis said that after the speech, he will definitely consider supporting the Forward Party.

“As someone who doesn’t have a ton of background or interest in politics, it’s very optimistic, and I think it’d be a good way for me to delve a little bit deeper into that world and maybe support a real change maker,” Davis said.

Thomas Kovac, a Wiess College junior, said that before the event, he was familiar with Andrew Yang and was impressed with how well he did in the 2020 Democratic primary.

“I was interested to hear his take on our current political situation and agree with his endorsement and fight for ranked-choice voting and open primaries,” Kovac said. “Overall, I really enjoyed the event and found Yang to be funny and personable.”