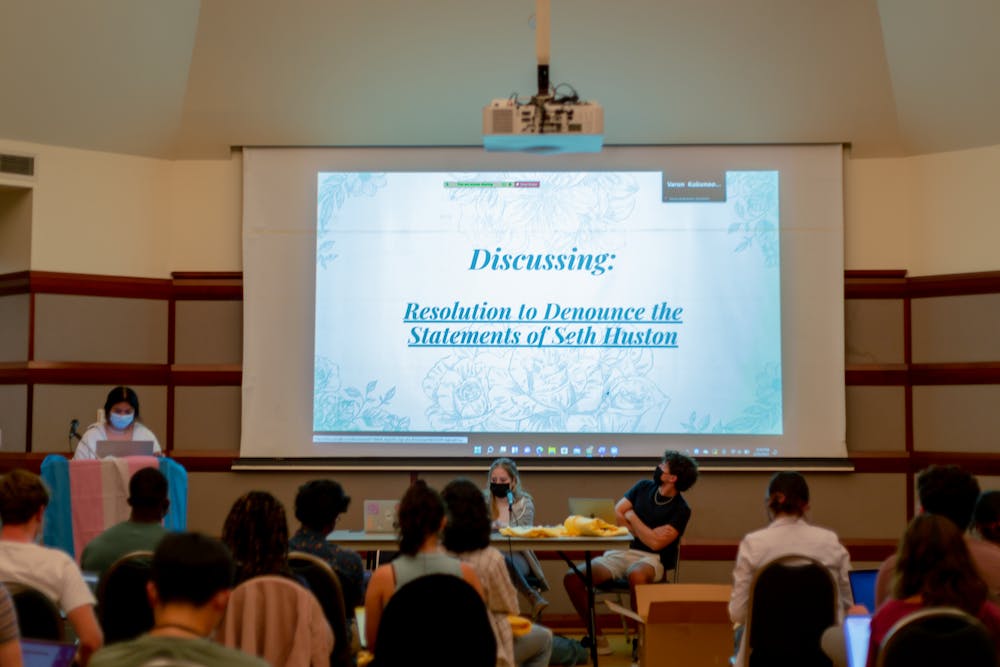 At the Student Association meeting Monday, discussion continued on the SA resolution in response to Rice swimming coach Seth Huston’s comments on the NCAA policy change regarding transgender participation in college-level sport.

The SA resolution, introduced by the Equity Council, states that Huston’s comments are not supported by scientific evidence and feeds into the social otherization of trans people. Gargi Samarth, chair of the transgender and non-comforming committee, said that the purpose of the resolution was to explain why it was harmful for comments like that to be made for the trans community at Rice.

“We are definitely not saying he is trying to be transphobic … but [his statement] kind of implies that trans women aren’t really women, and that it is okay to question their gender,” Samarth, a Brown College junior, said.

The resolution was first introduced in the Feb. 7 Senate meeting. Blaise Willis, a senior at Duncan College, said she was appalled to hear some people reacting the way they did.

“I can’t say I am super surprised because in general transphobia is pretty prevalent and most people don’t realize when they are doing it,” Willis said. “But it was disheartening.”

Samarth said that they felt the Senate leaders should have better monitored the discussion during the Feb. 7 meeting.

“I feel like the members of the Senate leaders could definitely have done a better job in terms of moderating the space and making sure that the dialogue that occurred was respectful and on topic, and didn’t say things about marginalized communities and the trans community that could really be taken as offensive,” Samarth said.

During the Feb. 21 meeting, SA President Kendall Vining, and other SA executive members, formally apologized for the transphobic statements made during the Feb. 7 senate meeting. Vining said that the SA executive team met with Rice PRIDE to learn how they can do better moving forward.

“I want to acknowledge the fact that there were transphobic statements made at our last senate and that is not okay,” Vining, a senior at Martel College, said during the meeting. “I want to apologize for that. That should not happen. That was transphobic, just calling it what it was, and I am sorry about that.”

During the Feb. 7 meeting, many students said that the issue of trans women in sport is a complex issue that the resolution does not fully capture.

“Seth Huston was not speaking out against Lia Thomas but against the NCAA for its silence,” a statement from members of the Rice swim team wrote. “We believe his intention was to protect the sanctity and integrity of women’s sport.”

William Tsai, a Will Rice College senator, said during the Feb. 7 meeting that he believed student athletes are the focus of this issue and their voices have to be heard. In the recent meeting this Monday, Tsai announced his resignation as senator.

“I have been informed by a member of the SA executive team that my conduct during the Feb. 7 Senate was problematic and unacceptable; that my words and actions actively brought harm to the transgender community here at Rice and made my fellow students feel upset and marginalized,” Tsai, a sophomore, said during the meeting. “As a result and a measure of accountability, I am announcing my resignation as Will Rice senator effective immediately.”

Matey Yanakeiv, a senior at Will Rice, said that discussion at both meetings lacked the mention of the impact on cisgender athletes, which he believes to be an important part of the conversation.

“When we know that cisgendered female athletes’ voices are being systemically suppressed around the entire country to speak up on this issue, and that they’re being directly impacted … and they are actually the majority of the stakeholders in the issue that [Huston] was talking about, I think it is imperative that any conversation on his comments include the potential benefit of empowering swimmers that also want to voice a dissident opinion, to speak up,” Yanakeiv said.

Yanakeiv said that when he shared these sentiments at the Senate on Monday, he felt his proposal was immediately shut down and he said he now believes that the current resolution cannot do justice to the complexity of the issue. He said that he feels the SA is creating an unsafe space to express relevant opinions on this topic.

“From other students I have talked to, my impression is that Rice is overwhelmingly against this proposition, and that people are just intimidated not to speak,” Yanakeiv said. “Senate is creating an obvious sense of dread and toxicity every time this topic comes up. So many students with any opinion that doesn’t immediately, totally agree with the resolution writers are being forced not to speak. They are being pressured out of speaking.”

Eli Johns-Krull, who helped draft the resolution, said they believe that the argument about centering the resolution on cisgender athletes misrepresents the issue the resolution is addressing. They said the issue is not primarily an athletics issue, and that it is only a part of the conversation because the person who made the comments was a member of the athletic department.

Johns-Krull said the impact of the statements on trans students is important to recognize when considering the importance of the resolution.

“[Huston’s] words and the University’s failure to respond to them have led directly to multiple conversations wherein trans people are forced to endure transphobic sentiment and defend their humanity to their peers as well as faculty of this university,” Johns-Krull said.

Lee Waldman, who originally presented the resolution alongside Director of Equity Stephanie Martinez, did not attend the meeting this Monday but a statement was read on their behalf. Waldman said that their association to the resolution has become unsafe, but they will still speak out because they fundamentally believe in it.

“I will not stand for this University or any of its employees adding to an ideology that is causing the deaths of trans people,” Waldman wrote in their statement. “If you do not support this resolution, you are advocating for sentiment that causes trans people to die.”

Martinez said she believes it’s important for the SA and Rice administration to show they support trans students at Rice.

“Sometimes the discussion around this gets shifted to be about athletics or censorship, but the focal point is trans individuals,” Martinez, a junior at Sid Richardson College, said. “They are the ones who were harmed by the statements of Seth Huston.”

Disclaimer: Eli Johns-Krull is a videographer on staff for the Thresher.