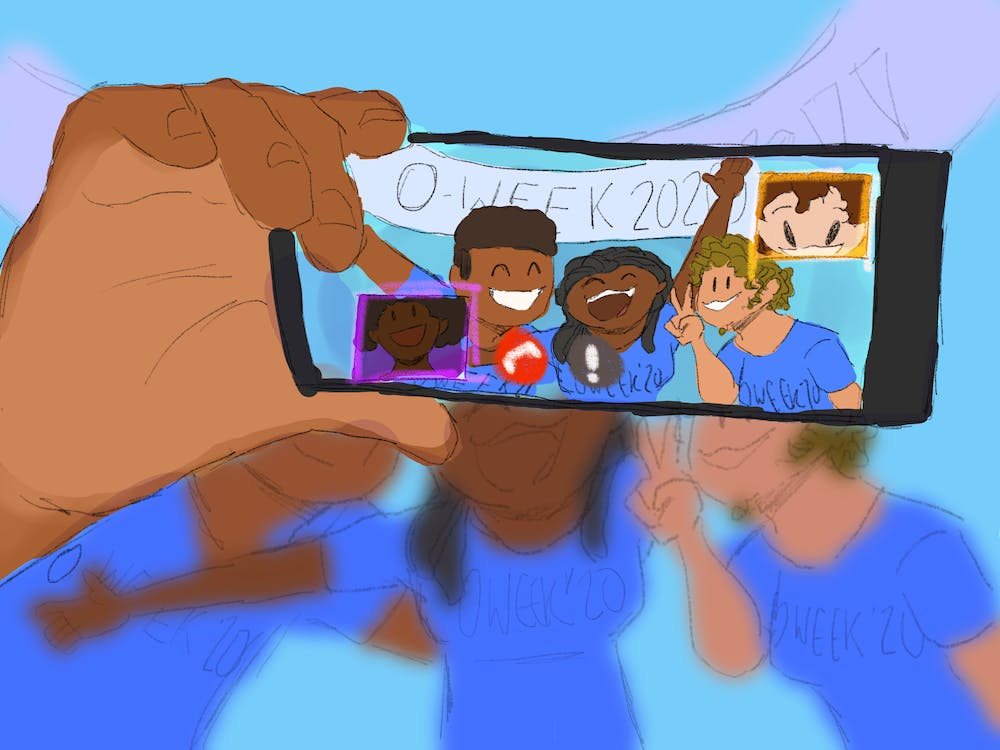 Isha Khapre, originally from Kenya and currently a student at Hanszen College, stepped foot on campus for the first time in the fall of 2021. She isn’t a freshman, though, but a sophomore.

“I stayed at home for my entire freshman year,” Khapre said. “I didn’t get my visa until January 2021.”

Khapre belongs to the class of 2024, the class that, some may argue, received the shortest end of the COVID-19 stick. Juniors and seniors have experienced at least one normal, pandemic-less semester of college. Freshmen have grappled with a modified school year that has been gradually returning to normal with the rollback of masking, dining and gathering restrictions. Sophomores, meanwhile, have been experiencing the transition to a more active campus after a highly altered freshman year – that may have occurred entirely off-campus.

Wiess College sophomore Leyah Mathew, who attended Rice in person freshman year, said the most significant difference between her freshman and sophomore years is her engagement with campus.

“This year, the biggest thing for me was seeing how many people were walking around,” Mathew said. “Last year, campus never looked like that. It was so empty because everyone was just inside doing classes. Now, the passing period in the academic quad is so busy.”

Aaliyah Mobley, a sophomore from Duncan College who lived on campus last school year, said that the in-person class format makes for much better navigation of campus. Through a student crochet organization, Mobley is more engaged with Rice this year.

“All of my classes, except for one, are in-person and synchronous. It’s much easier to be involved with and to know my way around campus now that I have reference points [due to in-person classes],” Mobley said. “It was also so hard to reach out to people online [during freshman year].”

The current academic year feels like freshman year for many sophomores, according to Mathew, who advised during Orientation Week last fall.

“Especially during 2021 O-Week, I felt like I was learning things about campus along with the freshmen — such as where the buildings are located,” Mathew said. “Because we already had a year of college under our belt, there was an expectation that we should be more familiar with campus than we actually were in reality. So there was a learning curve for us, too.”

Mobley said that they also experienced a learning curve.

“[Coming to Rice in sophomore year] was better in a lot of ways,” Mobley said. “It was also worse [because] I had no idea how to be a college student, really.”

The altered start to college has affected some sophomores’ engagement with their college culture, according to Khapre.

“Since coming to campus [in fall 2021], I’ve been trying to get involved with Hanszen culture as much as possible, like going to flag football games and participating in committees,” Khapre said. “It’s harder to get integrated into college culture since I didn’t have that initial introduction.”

Perhaps an unintended effect of sophomores’ modified freshman year is a desire to experience an introduction to college much closer to normal. Johnny Guerrero, Mia Mapula and Mathew all advised during 2021 O-Week, while Khapre is applying to advise during O-Week 2022.

“[Reliving my O-Week] was one of the main reasons why I wanted to advise,” Guerrero, a Lovett College sophomore, said. “I wanted to get the vibe of how it feels to experience an actual O-Week.”

Mapula, a sophomore from Wiess College, also said that the 2021 O-Week was more engaging than her freshman O-Week.

“The Lovett O-Week that I co-advised at was much more active and fun,” Mapula said. “We were slapping each other with shaving cream – that never would have happened a year ago.”

Mathew said that O-Week 2020 looked vastly different from her time advising last fall: move-in times then were staggered, O-Week groups were smaller and bonding activities were either online or masked and socially distanced last school year, according to Mathew.

“I didn’t even know what to expect for move-in, because I knew it was going to look so different,” Mathew said. “I saw YouTube videos of O-Week or Rice move-in [before COVID], but I knew my experience wasn’t going to look like that.”

Mapula said that she avoided these videos entirely.

“I didn’t bother watching old YouTube videos about O-Week because I didn’t want to be jealous,” Mapula said. “I knew that this was all I was getting.”

Khapre said that O-Week looked even stranger for her as she participated in it completely remotely.

“I wanted to be a part of O-Week, so I did stay up for all the events and try to participate as much as I could. It was definitely weird, firstly because of the time difference and having to stay up super late,” Khapre said. “Also, the people in person got a totally different experience. You obviously bond a lot better in person because you’re always with each other, and you could tell in the Zoom that the people in person knew each other better.”

Guerrero, who attended O-Week in person, said that he observed a close camaraderie within O-Week groups.

“Our O-Week groups had to stick together because we couldn’t interact with other people,” Guerrero said. “So I think it kind of forced our O-Week group to get a little closer than usual O-Week groups.”

According to Guerrero, the most striking modification to O-Week was mealtimes.

“A really great part of O-Week is getting to sit together with your O-Week family and talk to each other,” Guerrero said. “It wasn’t fun to be alone in a room eating and looking at people on a computer screen instead of being physically together with people.”

Many social interactions occurred over screens in 2020. Mapula said she participated virtually in the Rice Early Scholars Program the summer before she matriculated.

“There was a cohort of maybe 50-100 incoming freshmen,” Mapula said. “I was lucky to have that because I was in a bunch of group chats and able to get to know all these people. We all kept in touch, texting and FaceTiming.”

Khapre said she also met people through GroupMe and Discord before coming to campus.

“Through virtual interactions, I got to know certain people, which was really helpful when I got to campus,” Khapre said.

Much of course instruction and campus engagement were virtual last year as well. Khapre said she took all her classes at home in Kenya.

“Most of my classes were lecture-based ... sometimes I would watch the recordings asynchronously if the timing was easier for me,” Khapre said. “The main difficulty that I had was office hours. I had to attend them at weird times. Also, international internet is slower than domestic internet, so I ended up waiting in breakout rooms for long times or getting kicked out of Zooms.”

Guerrero and Mapula, both originally from Houston, also lived at home during their freshman year. Both said their classes and assessments were delivered online.

“During my second semester of freshman year, I had one class that was dual-delivery. For the first few weeks [of the semester], I wanted to go to campus and see people, so I would attend in person. But after a while I found that it wasn’t really worth it,” Guerrero said. “With COVID, I felt really unmotivated to go.”

The dullness of school via Zoom is a consistent sentiment among many students, according to Mathew.

“I found it very difficult to pay attention to Zoom classes, especially towards the end of the fall semester,” Mathew said. “It baffles me now that we spent so long staring at our screens.”

Mapula said the online format allowed her to avoid visiting campus most of the time.

“I didn’t visit campus or Wiess unless I had to,” Mapula said. “I did have FOMO, but I made the best out of my situation. If I figured I wasn’t going to go to a Team Fun Friday Wiess, I could sleep over at my childhood best friend’s house or binge-watch Marvel movies.”

After living on campus during the fall 2021 semester, Mapula said that her fear of missing out has eased a bit.

“Coming here made me realize that not everyday was a TFFW or a Wiess movie night,” Mapula said. “It’s still a Monday in life, doing homework in commons. I realized that I really wasn’t missing out on that much, actually. Also, since Rice is such a small community with people you see all the time, it can feel very closed off from the outside. I’m glad I can live at home and have a balance between my family and my school life.”