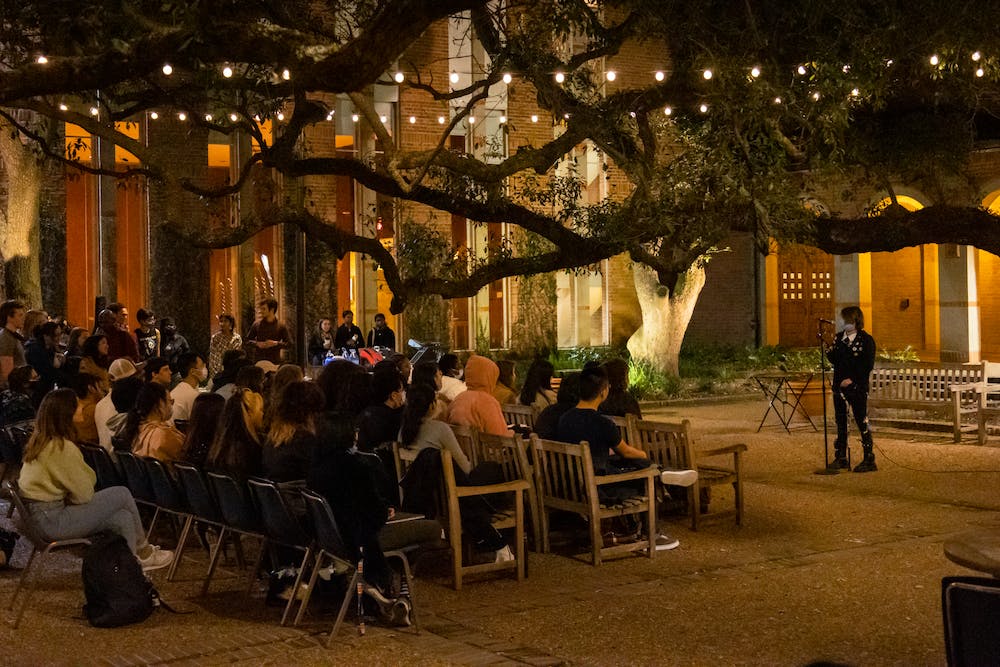 To many, Rice PRIDE events are just that — capitalized and in technicolor. Last Thursday, the undergraduate club’s Open Mic Night offered students a more intimate setting to express themselves and connect with listeners, who received them with earnest applause and words of support. Throughout the night, the energy ebbed and flowed as students presented their art with topics ranging from sobering to inspiring. Guidelines were purposefully left open-ended, since the event was intended to provide a communal space for performers to make the night their own.

According to Anthony Nguyen, Rice PRIDE co-president, the idea for the event had been floated around for a while before being brought up again at a recent meeting.

“Open Mic Night sort of came up in conversation at one of our executive board meetings last week,” Nguyen, a Hanszen College senior, said. “We wanted a new event to kick off the semester and the new year. A lot of our bigger events tend to be social events, so we figured we would change it up a little bit.”

Gargi Samarth, one of the organization’s general leads, said in anticipation of the event that they were looking forward to the connection it can enable in real time, as well as the feedback that the audience can organically deliver.

“I’m really excited [that people could] share their thoughts and feelings and individual experiences especially relating to their queer identities,” Samarth, a Brown College junior, said. “I feel like it’s really important to provide a sort of formalized space where people can hear from each other, and express their art [or whatever other creation you want to call it] and have other people listen and give feedback.”

While members say they are used to communicating through online chats, sharing experiences in person is newer given the last couple of years.

“Rice PRIDE has a very strong online community. At least, our group chat is super active,” Samarth said. “But especially because of the pandemic, I think people have been very limited in opportunities to connect in person, so I feel like we’ll have a good turnout and I’m excited to see everyone there get together.”

Members and other attendees may not have been as accustomed to the in-person format, but many performers felt at home sharing their spoken word or songs because of previous experience performing in front of live audiences. Some revisited poems they debuted years ago, while others tested out new ones written only hours before deciding to perform on the spot.

Alexa Thomases, who presented an original spoken word piece, said that she is familiar with the unique energy found at open mics after getting into them in high school. They joined Rice PRIDE as early as their orientation week and immediately knew she wanted to be a part of PRIDE’s open mic after receiving a message on the Listserv calling for performers.

“I started doing spoken word poetry in high school and found that it was a great forum for self expression,” Thomases, a Lovett College junior, said. “The open mic scene has always historically been very inclusive of the LGBT community, and when I was in high school I even went to some LGBTQ specific open mic nights. So to me, those two things — spoken word and engagement with the LGBT community — have always been interconnected.”

Thomases said they especially appreciated the intersectionality represented at the show.

“One thing that was really incredible about this event, and hopefully speaks to the inclusivity of Rice PRIDE, is that a lot of performers highlighted the different intersections of their identity,” Thomases said. “A lot of people spoke about how their gender or their sexual orientation sort of interwove with either a racial or ethnic identity, [or] their ability, perhaps.”

According to Thomases, the complexity in students’ perspectives contrasts with the one-dimensional stories they are used to hearing about the community.

“I thought it was really refreshing to see that because oftentimes I find that the LGBTQ circles can be fairly white, fairly cisgender and sort of deliver a streamlined, watered-down message about the LGBTQ comunity,” Thomases said. “But I felt that Rice PRIDE’s Open Mic Night really showed a broad range of LGBTQ experiences and a lot of nuance.”

Yiyi Yang, who performed a song by a Taiwanese band in Mandarin Chinese, said that the audience’s support helped her to overcome any initial hesitancy.

“I was a little nervous at first … but [the] people are really nice. Once I started to sing, I just got into that mood, and everything was fine,” Yang, a Lovett sophomore, said. “This was really a chance to express myself and get to know other people and what they are bringing to the stage. I’ve always been passionate about sharing my own culture with other people, so this was a great opportunity.”

“I felt like it was a crowd where what I said would be accepted, especially because it’s PRIDE — I mean, everything’s accepted,” Tate said. “[That] definitely helped me take that final step.”

Several performers said that they would love for PRIDE to organize another open mic, especially because anyone who did not initially feel comfortable enough to perform might be inspired to participate in the next one.

Samarth said they hope that the community’s acceptance of all kinds of narratives will be imparted on audience members.

“I hope that they will leave recognizing the sheer amount of diversity and different experiences and talent that exists within the queer community at Rice,” Samarth said. “And [have] an appreciation of how it’s hard for people to get up there and share something that they’re passionate about or feel strongly about, so I think to recognize the value of being part of that experience is really important.”