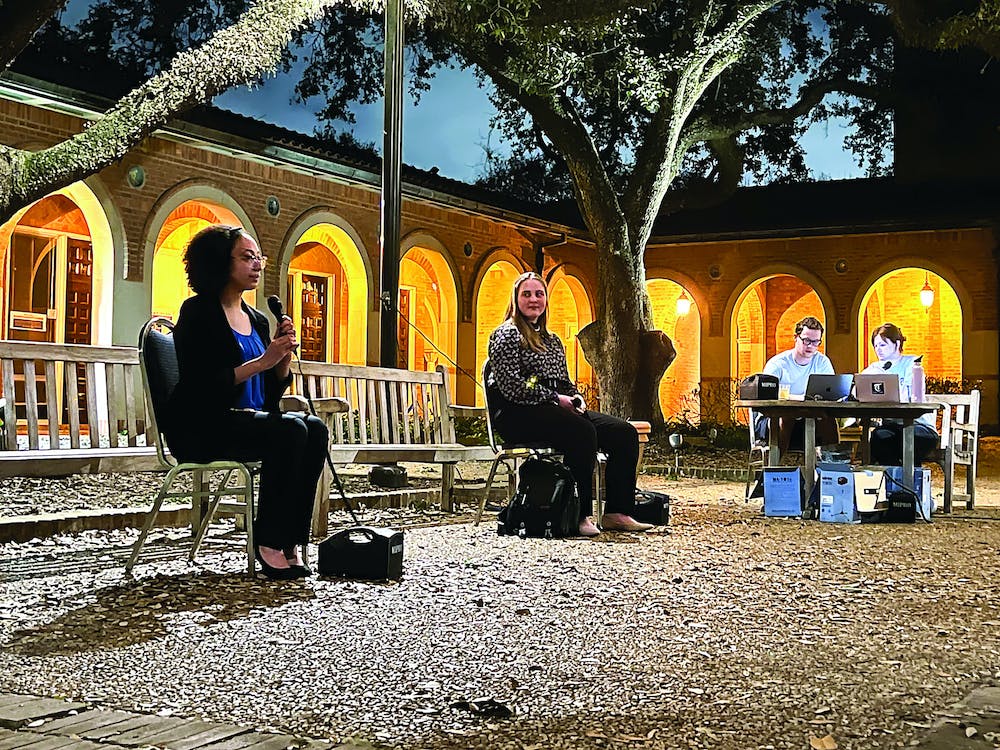 Student Association presidential candidates Madison Bunting and Gabrielle Franklin highlighted their visions for the SA at the Thresher’s Election Debate on Monday, Feb. 22. Bunting is the SA’s current internal vice president, and Franklin is the current Brown College senator.

While Bunting said she will put people first, Franklin said as president she will primarily focus on policy.

“I’ve been putting policy first because policy is enactment,” Franklin, a sophomore, said. “I believe that we can continue to say that we'd be putting people first, especially when it's in regards to academics, which is not just the standard of a person, but towards actually doing something, policy is the best way across campus in order to create groups, such as task forces, committee actions, and so on.”

The SA should be a body for students to learn to advocate for themselves, Bunting said.

“My focus on people is because as I was thinking about what are specific issues that I want my platform to be focused on, I realized that I could pick almost any issue and the reasoning behind caring about it [is] just because I cared about the people that cared about that issue that were affected by it,” Bunting, a junior at Martel College, said. “My focus is on people, and my goal for being president is to create an organization where students can get involved, actually be equipped and learn how to pursue advocacy themselves.”

Bunting said the SA has in the past been too focused on policy, leading to less interest and student engagement. In last year’s SA election, less than a quarter of students voted.

Franklin pointed to her experience as an interracial student as evidence that the SA should further address diversity.

“The first part of my plan … is de-stigmitization campaigns,” Franklin said. “Further, I'd like to create organizations and to support those that are already in place and emphasize their importance across campus.”

Recent controversial SA debate on comments by Rice swim coach Seth Huston about a transgender swimmer are an issue of accountability, Franklin said.

“I think that the issue that impacts students most is accountability across campus,” Franklin said. “We have been both blindsided by admin in the events of the EarthCam and the academic accommodations without student input. We've also had Senate not be a safe space. On 2/7 Senate, underrepresented groups especially were heckled and so this is unacceptable to me. I believe that one, as student leaders we should be safe for you to approach, and two, that your voices should be heard by administration.”

Bunting said she has helped the student body by increasing the accountability of the SA’s committees.

“Change or progress is relative and iterative, so you can't fully change overnight,” Bunting said. “But the committee system has been so much elevated this year, there's a lot more student engagement with the committees and students' abilities to be involved in the SA and understand and learn how advocacy works.”

Franklin said she is better qualified to enact her desired changes by not having previously held an SA leadership position, unlike Bunting.

“In continuity, there's a weakness in sort of preserving the weaknesses that we've had in the previous administration,” Franklin said. “I worked on the ground as an [new student representative] and as a senator, in contacting people and actually working toward enacting change. I believe that I have a more hands-on approach thanks to my previous experience than I would if I had taken a break and decided to become an executive member.”

In response to a question from Bunting about her knowledge of how the SA works, Franklin said she has worked on multiple projects as an NSR and a senator.

“I've been doing work with a coalition on food accessibility, [and] most of our conversations happen directly with admin,” Franklin said. “That way we get it done instead of through legislation, by asking directly for a policy change … That's why I didn’t produce legislation, because I decided to go right to the source, and so yes, I have written less legislation this year."

In a moment reminiscent of the 2016 presidential debates, an audience member asked the candidates why their opponent is qualified to be the SA’s president.

“Madison is definitely more detail oriented, and it plays both as her greatest qualification and her greatest weakness,” Franklin said. “I think that's what qualifies her the most, the fact that she does look to pay attention to the minute details.”

“Gabby cares a lot, and has done a lot on the ground,” Bunting said. “From what I've heard from her NSRs, she's also been a really good mentor, and those are qualities that could serve her well in the role of SA president.”