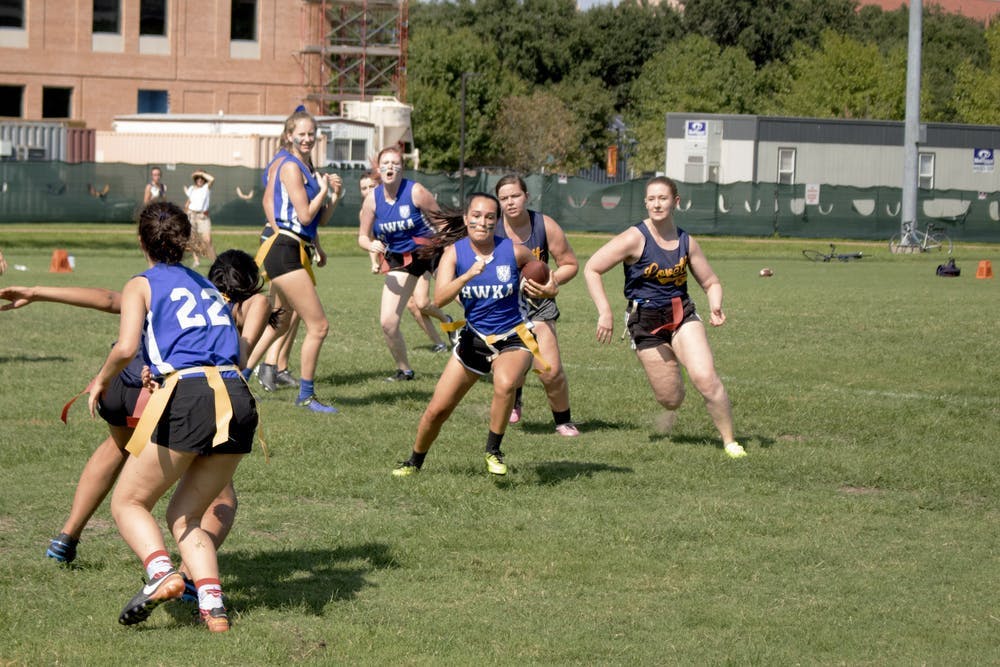 After the cancellation of the 2020 women’s flag football season due to COVID-19, students across Rice have been looking forward to the return of powderpuff this year. According to Vaidya Parthasarathy, a Powderpuff coach at Wiess College, the coaches and players are just excited to be back on the field.

“We just want to get out there and play,” Parthasarathy said. “I hope we can get back to it without many more administrative delays.”

Powderpuff, which is made up of one team from each residential college and one from the Graduate Student Association, is typically played during the fall semester. According to Isaac Goforth, a Will Rice College senior and one of the three Powderpuff coordinators for this year, the coordinators are usually chosen in the spring of the preceding year for the fall season. However, this year, delaying the recruitment of the coordinator team to the fall semester led to the official season starting in the spring instead.

“We got a much later start than what the coordinators are supposed to have … and we weren’t chosen until well into the fall semester,” Goforth said. “Also, OwlNest and iO Web Clock were both new things within the past two years so previous coordinators couldn’t help us with that since [these systems were not] there when they were in the position … so it was a very steep learning curve navigating the new club registration process.”

Though Powderpuff was put on pause from the spring of 2020 to the spring of 2021 due to pandemic-related restrictions, COVID-19 isn’t the only reason the season was delayed, according to Goforth.

“[The lack of interest in IM sports] is understandable with the shutdown happening … and since there were no regular intramural sports going on during that time, it sort of disrupted the pipeline of people that were interested in signing up to be officials,” Goforth said. “But the delay was actually a problem in the last two seasons too before all the shutdowns happened because the coordinators got off to a late start since they were chosen late … that is a problem we are trying to fix for next year. The delay hasn’t had anything to do with the level of participation player-wise or coach-wise, but we’ve definitely had a leadership vacuum and some administrative issues.”

These delays have affected teams and players as well. According to Hannah Usadi, a Will Rice junior and Powderpuff player, players are ready to get back on the field after a long delay.

“It definitely sucks especially for the seniors that their final season has gotten pushed back so far,” Usadi said. “But I think everyone is vibrating with excitement for the real season to finally get started since we only had scrimmages last semester.”

According to Will Rice assistant coach Jonathan Lloyd, players are looking forward to a strong season after these scrimmages leading up to the season starting.

“It’s really been quite frustrating because we all just want to play games,” Lloyd said. “But we’ve had a few good scrimmages with some other teams, so we’ve been energized by our performance. Our team is optimistic.”

According to Parthasarathy, Wiess has been having practices in preparation for the upcoming season.

“We had our first introduction to Powderpuff after [Orientation Week],” Parthasarathy said. “We practiced about one to two times per week back when we thought we would have games in the fall, but we slowed down practices after we realized games wouldn’t be happening for a while. This season’s start has been frustrating for sure since it keeps getting pushed back so it’s a little bit of a ‘let’s see what happens’, but we’re excited to be playing a game this week.”

With the season finally set to kick off this weekend, Goforth said that the excitement for Powderpuff is evident across colleges.

“We’ve had plenty of players show up and they’ve brought fans with them,” Goforth said. “So the enthusiasm is definitely there at the college level.”

According to Goforth, Powderpuff is looking to welcome anyone who is interested in being a part of the coordinating team or the residential college teams.

“We’re looking for successors for ourselves already,” Goforth said. “Even though it’s only February it’s certainly never too early to start, especially given how past seasons have been delayed.”