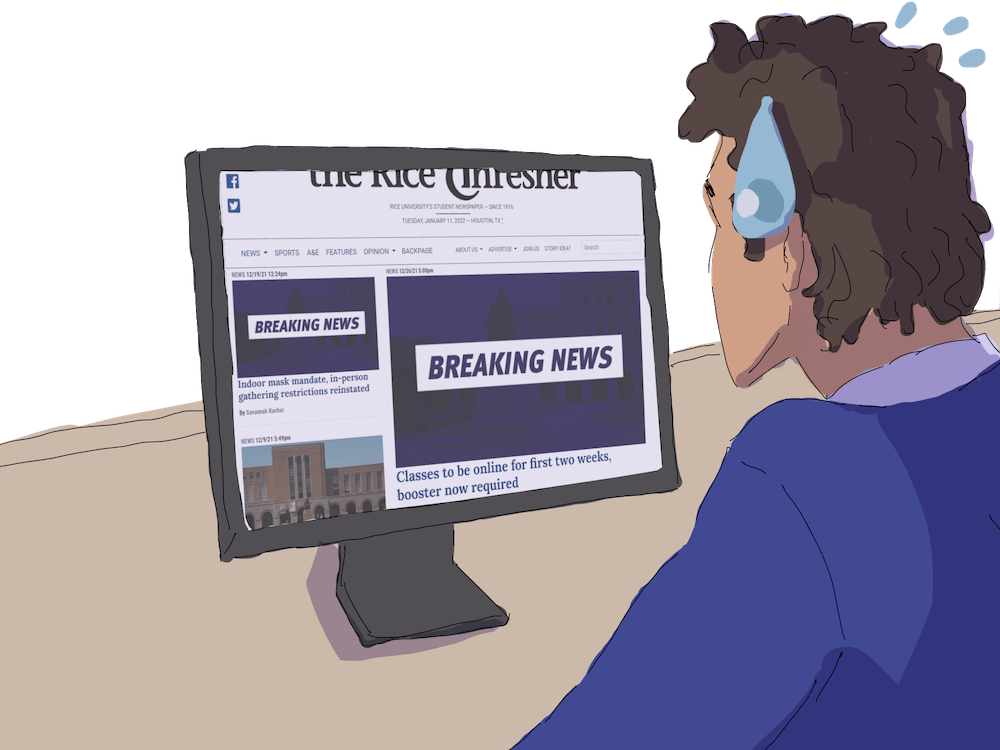 More than 326 Rice community members tested positive for COVID-19 from Jan. 3 to Jan. 10 as the Omicron variant spreads rapidly across the country. Through the entirety of the 2020-2021 academic year, Rice reported 367 cases.

In response to the rise in cases, President David Leebron and Provost Reginald DesRoches announced over email that the first two weeks of most classes will be online. They also asked students to delay their return to campus, prohibited indoor dining, required vaccine boosters and reimplemented a full indoor mask mandate.

Student Association President Kendall Vining said she agreed with the new restrictions and encouraged students to abide by the temporary rules.

“I feel like that worked in the past, having it online for a couple weeks, tentatively, and then if they get worse keeping it but otherwise going back to in person,” Vining, a Martel College senior, said. “I know that we’re not going to agree with everything admin asks of us, but … we just have to keep pushing forward.”

Dean of Undergraduates Bridget Gorman said that she wants to return to in-person instruction as soon as conditions permit.

“I very much want us to resume in person as quickly as possible, and to have it only be two weeks,” Gorman said. “Social interactions matter, community ties and seeing each other and being around people that you care about matters.”

Rice will follow the Centers for Disease Control and Prevention’s new five-day isolation guidance, according to Chair of the Crisis Management Advisory Committee Kevin Kirby. The guidelines say that isolation can end after five days for an asymptomatic person, or after five days with improving symptoms and a full fever-free day for a symptomatic infection. After the isolation period, the CDC recommends wearing a mask and taking precautions for an additional five days.

David McDonald, the senior director of Housing and Dining, said that the shorter isolation period will give his staff more flexibility.

“Having an employee out 10 to 14 days and then return after a negative test, that was a little scary last year, because that’s a long time,” McDonald said. “With the five day isolation, the rollover in the return of employees who do possibly become ill or test positive, the turnaround time on getting them back on campus is much quicker … because they also don’t have to test out of the quarantine.”

Some studies suggest that up to 30 percent of people are still infectious after five days of isolation, according to NPR. McDonald said he is slightly worried about the possibility of contagious staff returning to work.

“I’m a little concerned, but the fact that I might only lose somebody for five days at a time, not 10 to 14, that makes it a little bit different,” McDonald said. “There’s lots of risks, right? Those of us with students in elementary or high school at home, they’re bringing stuff home. So there’s lots of ways to become ill or end up contracting this and testing positive, that’s not Rice related.”

Jerusha Kasch, director of institutional crisis management, said Rice will follow the CDC guidelines. Kasch declined to comment on concerns of releasing potentially contagious people from isolation, nor did she say if there are any restrictions for the five days following isolation.

Gorman said that she will prioritize academics and indoor dining as Rice looks to reduce restrictions, with alcohol considered later.

“As we’ve gone through, there has been a clear priority structure in our first priorities and getting things quote, unquote, back to normal as we move all the way down the list,” Gorman said. “Academics and indoor dining are going to be high on those lists, because they’re really important to the Rice experience.”

Elizabeth Groenewold, the general manager of Willy’s Pub, said she understands why Pub is closed while indoor dining and drinking remains restricted.

“Pub’s biggest nights always have more than 50 people, so it wouldn’t really make sense for Pub to be open at that time, especially if they’re not allowing indoor eating,” Groenewold said. “I do get it. I mean, of course, it sucks. Pub has been closed for so long, and we were only open for a month last semester. So it is a bummer, but I do understand why they did it.”

Gorman said she initially hoped to have publics early in the semester, but that it has been delayed.

“We haven’t had large public parties in a long time,” Gorman said. “In my mind, by the time we got to the end of [fall] classes, we were pretty close … Now, I feel like we’re paused a bit just because of the sheer numbers.”

About half of students who planned to live on campus have decided to delay their return to Rice, according to McDonald, and there are more open beds this semester than in the fall. Gorman said that Rice will try to avoid further delaying move-in but will track the number of students testing positive when they arrive.

“In all honesty, I just don’t know [if we will delay move-in further],” Gorman said. “I just think there’s a lot more information that we need to gather around that.”

If too many students test positive, Rice may run out of isolation space and ask students to isolate in place, according to Gorman’s Dec. 28 announcement.

“All of a sudden if you have a couple 100 students test positive, can we carry that on campus? No, we can’t, not in the way we’ve done before, in terms of complete separation,” Gorman told the Thresher. “I’m really hopeful that we’re not going to exceed these limits by people being vaccinated, boostered, taking good precautions when they’re traveling, doing everything in your reasonable power to protect yourself and stay safe, that the numbers will stay at a level we can manage.”

Kasch said that isolation space will be prioritized for symptomatic students.

“Isolation space will be used for those who are positive and symptomatic until all space is filled, at which time students will be instructed to isolate in place,” Kasch wrote in an email. “Quarantined students (only those who have been exposed and not boosted) will quarantine in place.”

“By the time someone gets that test result back, you’ve already been in your room for an extended period of time without a mask around your suitemates and roommates,” Gorman said. “To a certain extent, if our options are limited, then yeah, we’re going to say, ‘Wear your mask in your room, separate yourself and do your best.’ But it’s just really going to depend on the numbers, which is how it’s been from the beginning.”

Vining said she is worried about the prospect of sharing a room with an infected student, but understands that Rice has few options.

​“I really am personally not happy that I’m going to be required to move back in person, yet there will be no guarantee that I wouldn’t be able to be separated from someone who’s feeling ill,” Vining said. “I feel like if Rice had the resources to be able to house people to ensure that people are kept separated, they would have done it, but I guess they don’t have those resources.”

McDonald said Crisis Management has discussed allowing positive but asymptomatic students to get their own food from the serveries.

“Our issue is what happens if we end up having to deliver food to rooms, and it's, let's say, hundreds of students all at once,” McDonald said. “My staff can't do that. I'm going to have to ask for help from a lot of folks … This would really help us if the CMT finally decides that students that are positive [but asymptomatic] can come down and basically get their food and bring it back to their room.”

Gorman said that she hopes the Omicron wave will subside quickly so Rice can avoid another long period of Covid restrictions.

“It sounds like this surge is going to burn through quickly,” Gorman said. “If that's the case, I think that harkens the ability for us to return to a normal-ish semester sooner rather than later, which is what I'm hoping for. I would like us to have a pretty normal Beer Bike, and I know everybody else wants the same thing.”

Christopher Johns-Krull, Speaker of the Faculty Senate, said it is important to consider that many faculty members have comorbidities when planning a return to in person classes.

“Some of my faculty colleagues have various underlying conditions that generally students don't have, just because we're an older population,” Johns-Krull, a professor of physics and astronomy, said. “Exactly how we manage the very real concerns that some members of the community have, but still maintain the in person residential experience that Rice is well known for and students expect, is a challenge, but I think that we will be able to strike a good balance.”

Johns-Krull said he hopes that most classes will be able to return to in person instruction.

“I expect that we will need to make some accommodations, but it is my strong hope that the vast majority of our classes go back to in person meetings,” he said. “I know many of our faculty feel quite comfortable being in the classroom, particularly with everybody masked.”

Gorman said that she suspects Covid will become endemic with no real clear end in sight, forcing institutions to find a way to provide as normal of an experience as possible.

“That's what I want to see happen, while always keeping an eye on population health, but that's physical health, and it's mental health, right?” Gorman said. “It's social health, it’s academic health, it's trying to provide everything in a way that is as optimal as possible, given the constraints we're operating under.”