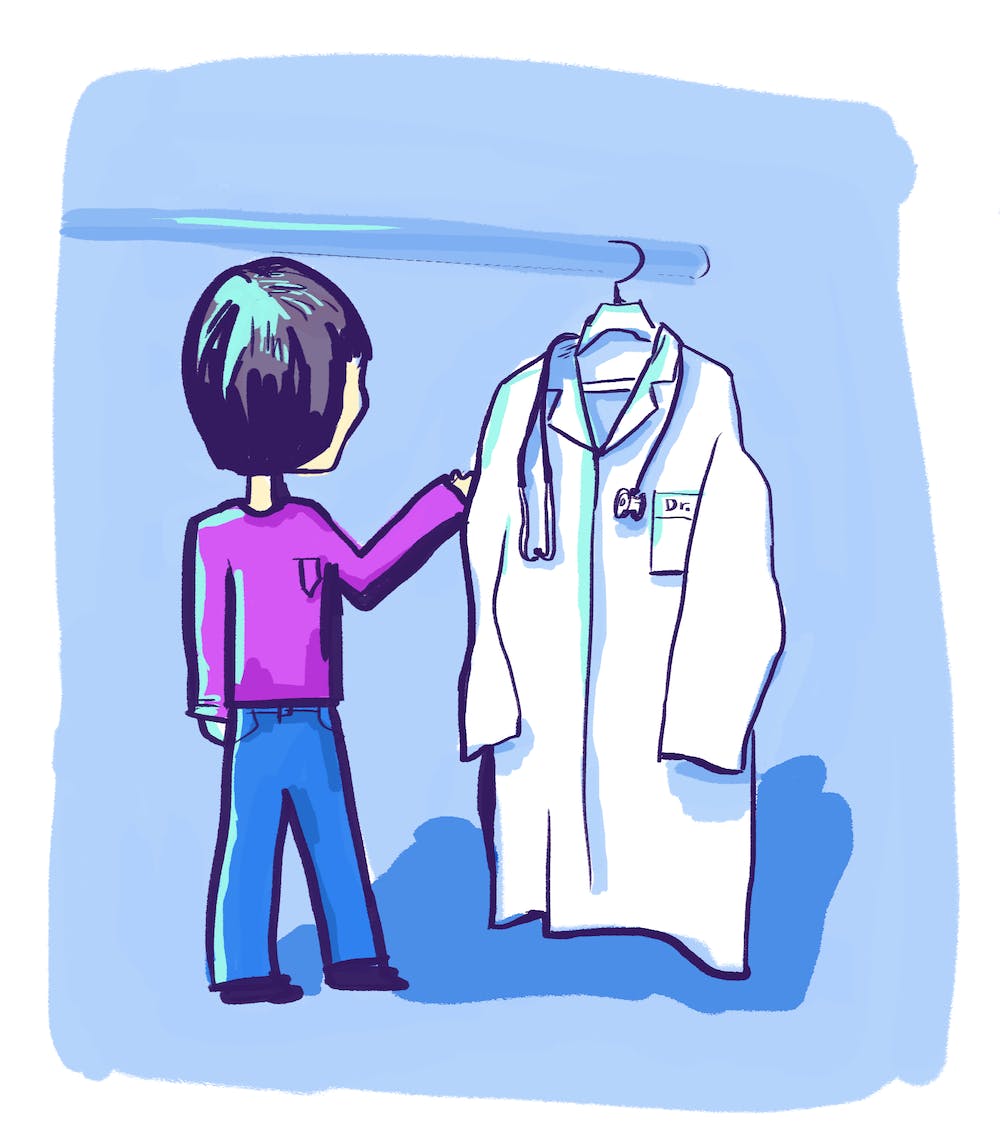 Fierst said that students ranging from freshmen to seniors have met with him to talk about transitioning out of pre-med.

“I think everyone’s journey tends to be unique,” Fierst said. “Some students figure that out sooner than others do. Students have definitely switched out of premed for a whole bunch of different reasons.”

Zahrah Butler, a Duncan College junior, said she wanted to be a pediatrician ever since she was three. Ariana Zhang, a Wiess College junior, also said that she developed an early interest in becoming a doctor.

“If my parents or teachers asked me growing [up] what I wanted to do, I just said I wanted to be a doctor,” Zhang said. “Part of it was that I genuinely really liked human biology and helping people.”

“My grandfather was a retired doctor,” William, a Martel College senior, said. “One time he brought home a cow heart for me to dissect. All of those experiences with medicine and hearing his stories, which were really cool … got me into medicine.”

William said that he believes the influence of family, rather than actual experience with medicine, often impacts his peers’ desires to be pre-med.

Trevor Egerton (Sid Richardson College ’20) said external influences from his doctor grandparents and intrinsic interest towards science and pre-med activities in high school both contributed to his choice to enter Rice as a pre-med.

“[My grandparents] talked a lot about the career [of a doctor] and how great it was and that definitely influenced me,” Egerton said. “But there was some level of intrinsic interest as well.”

For others like Jazmine Castillo, a McMurtry College junior, the salary and job security were important factors.

“I am a first-generation low-income student, and from the time of fifth grade I figured out that being a doctor is one of the best options if you want to get out of your [FGLI] background,” Castillo said. “People always say it’s not about money, that you shouldn’t be a doctor for money and stuff, but honestly as an FGLI student that’s something that I have to consider.”

Some of those that have decided the pre-med track is no longer for them have found alternative careers in related fields.

Zhang said learning about other careers in health as well as the length and cost of medical school influenced her to pursue becoming a physician’s assistant rather than a doctor.

“I’m just tired of going to school,” Zhang said. “The pre-med route is really long. It’s four years of school and then residency where you’re still not fully working yet. Whereas other health professions, for example [Physician Assistant] school, are just two years and then you’re working. Also, as a PA I would be able to do very similarly the actual day-to-day duties.”

Other former pre-meds said they have found other interests and passions outside of medicine.

“The summer after my junior year, while planning [med school] applications, I was also working on my senior thesis for my history major,” Egerton said. “While doing research for that project in archives in Texas and D.C., I came to the realization that doing historical research was something I enjoyed doing much more than any of the pre-med science processes or doctoring. I couldn’t walk away from history without giving the academic Ph.D. route a shot.”

Former pre-meds said they discovered a lack of interest in the required classes, nature of study and the process of applying to medical school.

“I didn’t really like (A) the grindy nature of the assignments; (B) the hoops I had to jump through, like research that I wasn’t too interested in; and (C) after shadowing doctors, it was definitely interesting, but it wasn’t so interesting that it was worth going through medical school and having it consume my life,” William said.

Butler said that in addition to the time and money required for medical school, her struggles with required STEM classes motivated her to leave the pre-med path.

“I realized that I wasn’t really a fan of spending my life in STEM,” Butler said. “I feel like I struggled a lot in STEM and getting used to those physics classes and math classes and things like that. That was really difficult for me.”

Castillo said that watching peers partake in pre-med activities helped her figure out that she would not be happy in the medical field.

“I saw some of my peers, who were also pre-med, studying for the MCAT and shadowing doctors and doing all of these things that I never did because I didn’t know how to even start with that,” Castillo said.

Others said that the pre-med culture at Rice was a factor for pursuing other interests. Zhang said she was intimidated by it at first.

“I always felt that I didn’t fit in with how intense some pre-meds are,” Zhang said. “They’re just really passionate and have all their stuff together and know exactly what they’re gonna do, and I’m not like that at all. I started doubting myself, too, when I started comparing myself to other pre-meds at Rice. It’s very easy to compare yourself and get caught up in the comparison culture.”

Butler also said that pre-med culture was not for her.

“I feel like I know a lot of pre-med students who are more focused on being a doctor than being a person as a doctor and they are just like grades, grades, and research, research and do that kind of stuff,” Butler said. “I feel like generally toxicity at Rice is better than it is at other colleges, but I still will say that it can get surprisingly ugly at times.”

In contrast, Egerton said that he enjoyed being part of the pre-med community at Rice, especially at his residential college. At Rice and among Egerton’s family, making the transition out of pre-med was difficult.

Castillo said that in addition to the pressure of telling her mom about her change in direction as an FGLI student, she is stressed by the process of transitioning to a new career path halfway through college.

“I’m still in that stage of discovery, and it’s honestly really stressful as I’m a junior now and this feels like stuff I should have started exploring much earlier,” Castillo said. “I could have done externships … and internships and tried to find what things I’m interested in. Now [that I’m] a junior, deadlines are impending.”

Castillo said she is considering a Rice 4+1 masters program in environmental analysis and is unsure whether she wants to go straight into a career involving conservation or ecological and biological consulting or if she should apply to graduate school and do a Ph.D. in biology with the aim to become a professor.

William, who transitioned out of pre-med and a major in biochemistry earlier during his time at Rice, said that he switched between many different majors and career goals – ranging from majors in economics to statistics and careers in entrepreneurship to machine learning before he decided on a major in computer science, with the intent to become a software engineer.

Butler said she aims to pursue a Ph.D. in African-American Religion with a focus on Christianity in enslaved communities in the U.S. South. Egerton is currently a Ph.D. student at the University of Colorado Boulder studying 20th century American history, history of the U.S. South and environmental history.

Despite the challenges in transitioning out of pre-med, multiple students said they are happy with their new paths.

Fierst said that the Office of Academic Advising and the Center for Career Development would be happy to help Rice students thinking about switching out of pre-med.

“We serve all students whether they are pre-med or not,” Fierst said. “We definitely want to have those conversations [about switching out of the pre-med track] with students at any point in their journey. Other students find their way to the Center for Career Development. For students going straight into a career they may find that the services of the CCD are better suited to the questions that they have and the needs they might have moving forward.”

Castillo said that advice given to her freshman year regarding medical school influenced her decision to leave the pre-med track.

“I was part of a program at Rice called Big Owls Little Owls in which they brought in medical students and doctors to talk to undergrads, and one of the med students said something that is still now sticking with me,” Castillo said. “He said, ‘If you even think there is something else you might want to explore, do that before you go into med school, because that is so many years of your life.’”