Looking back at the Thresher’s first issue 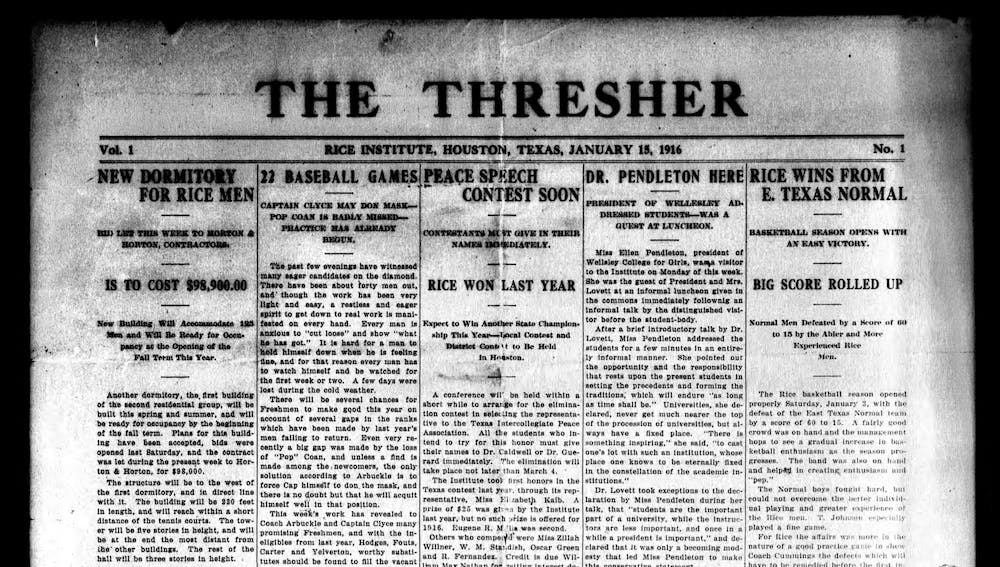 The basketball team had just recently won their season opener 60-15 while a contract for the construction of what would become Hanszen Old Section was awarded in the week that the very first issue of the Thresher was printed 106 years ago, January 15, 1916.

Two years before the Thresher would pause printing amid World War I and the 1918 Spanish flu pandemic, a staff of eleven students came together to produce this four-page paper and the ensuing issues, each published fortnightly throughout that semester. The Thresher would shift to its current weekly schedule after its postwar return during the spring of 1919.

The then editor-in-chief, managing editor and associate editor co-wrote an editorial in which they outlined the purpose and goals of the new publication.

“Three years in our [school’s] history have gone by without a means of voicing the opinions of the students,” Will Standish, Eugene Millis and Ruth Sullivan wrote. “In inaugurating this paper the members of the staff believe that the time has come when the student body can and will support a publication which fills such a long felt want.”

Alongside the editorial, the staff wrote praise for literary societies, of which nine of the founding members were part before they joined the Thresher. In a separate piece, they appealed to the student body for their feedback.

“We will receive criticisms with the same grace that we will receive compliments, if such there should be,” the staff wrote. “If you want your criticism published we will publish it, and if it is just we will admit it; if it is unjust, we will take pleasure in telling you why.”

That same page included a note about “women’s part in the paper.” The staff wrote that female students were equally encouraged to be involved in the Thresher, which was to be “a soothing right” for “women of Rice whose pet hobby for the last four years has been ‘Equal rights for the downtrodden co-eds.’” At this time in Rice’s history, women could attend as students but could not live on campus, and only white students were permitted to enroll at the school.

This initial issue covered matters from sports to general news to activities of student clubs. Its front page announced the return of a beloved baseball coach, alongside a separate story on the team’s search for players among the freshman class to fill their ranks. On page three, an article by the staff, “Term exams take their toll,” estimated that 24 out of 410 total students had flunked out of the university between the fall and spring semester.

“Verily and truly it was a thinned-out bunch which came back after Christmas,” they wrote.

The Thresher staff also included a recap of a recent visit by President of Wellesley College for Girls Ellen Pendleton, by invitation of then Rice president Edgar Odell Lovett. Pendleton gave an address to a select group of Rice students invited to an informal luncheon with her, Lovett and his wife. The visit of another university president made the paper: Princeton University’s John Grier Hibben was expected in the city Feb. 11, 1916.

Back then, readers of the Thresher were charged a subscription — 10 cents per copy and 50 cents for six months. Mixed in with stories were advertisements for products and services of that era, including those for “high grade cigars, tobaccos and magazines” by Molesworth’s and “classy college haircuts” at Tiras Model Barber Shop.

Since that first issue in 1916, the Thresher has increased its staffing, print frequency and the usual issue’s page count while adding new sections of content, like Arts & Entertainment and a satirical Backpage. Through these and other changes, over a century later the publication remains as the first editors wrote “to paraphrase a well-worn expression … a paper for the students by the students.”