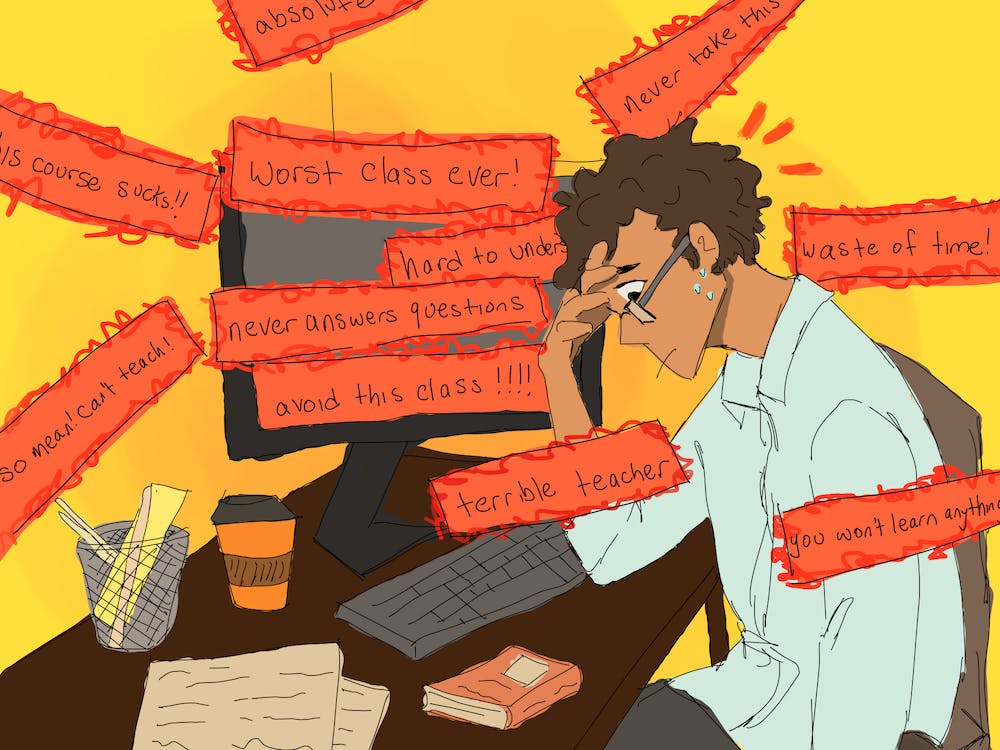 Due to concerns that pandemic-induced circumstances resulted in differences in course and instructor evaluation scores, the Office of the Provost allowed faculty to opt-out of showing their evaluations to students, according to an email sent out by the office in early August last year. In this email, the Office also wrote that the average evaluation scores were slightly better in fall 2020 and spring 2021, in comparison to previous semesters.

Faculty Senate Speaker Chris Johns-Krull said he suggested the idea of the opt-out option to the Provost after some supervising faculty had recommended it to the Senate executive committee.

“There has been [an] ongoing concern at some level as to how faculty teaching is evaluated, but this particular discussion was brought on by the pandemic and shift to largely remote learning for many faculty,” Johns-Krull said.

Professor of Economics James DeNicco said he chose to keep his evaluations and comments public and visible to his students, but he knows of instances where faculty members have received substandard reviews recently.

“So many of my colleagues that I know are amazing people, amazing teachers, [and they received] evaluations [that] have been tough, and some of the comments are really tough to read,” DeNicco said. “It’s hard to [attribute] that to anything other than the current times.”

Johns-Krull said that he thinks some instructors’ evaluations suffered specifically as a result of COVID-19, even for instructors who are well known for being very good teachers.

“I think some instructors and some classes just do not do as well as others in a remote environment, and that was much of the reason for the [policy],” Johns-Krull said.

Denise Maldonado, a Lovett College junior, said she opposes the policy because she is afraid of being blind-sided when preparing to take a course that is notoriously difficult.

“I feel like we should protect the ability to give anonymous feedback and publicly display it; it creates a safe learning environment in which students can help their peers in the following years,” Maldonado said.

DeNicco said he is not sure course evaluations are always helpful.

“Some students take them seriously and give you constructive feedback; I think a lot of what [students are] writing is for other students to read, who are going to be taking your classes,” DeNicco said. “But what you find with these evaluations is that they’re really [inconsistent] — you either get students to love you or really dislike you.”

Professor David Warren, who also chose to keep all their evaluations public, said harsh evaluations have existed since before the pandemic.

“I’ve known of faculty members who have gotten bad, or even scandalous, reviews in the past, and nine times out of 10, they turn out to be wrong, because you can write anything down that you want because it’s anonymous,” Warren said. “I’m not going to try and hide the comments that students make about the class, but it would be better if they made them openly, with clarity, so that everyone would know who the involved parties are.”

Anika Patel, a freshman from McMurtry College, said reading the professor and course evaluations helps her better structure her schedule and optimize her learning.

“Sometimes professors have different teaching styles that help with different students’ learning styles,” Patel said. “Not being able to read professor evaluations is really hurting people’s ability to choose a professor that will help them the most.”

Ethan Goore, a Duncan College freshman, said he still likes to see what previous students had to say about the class and professor.

“If something that someone wrote looks like they just didn’t like the professor personally, and they’re trying to ‘attack’ them, then that’s pretty easy to pick out,” Goore said. “It’s a common thing that happens, and it’s easy to tell. Especially, if they’re the only [comment] who says that.”

Maldonado said she appreciates the honest feedback from her peers.

“It’s all to cultivate a safe and supportive environment where peer feedback and constructive criticism are encouraged. And if you want that amongst the students, then it needs to be there with the teachers too,” Maldonado said.