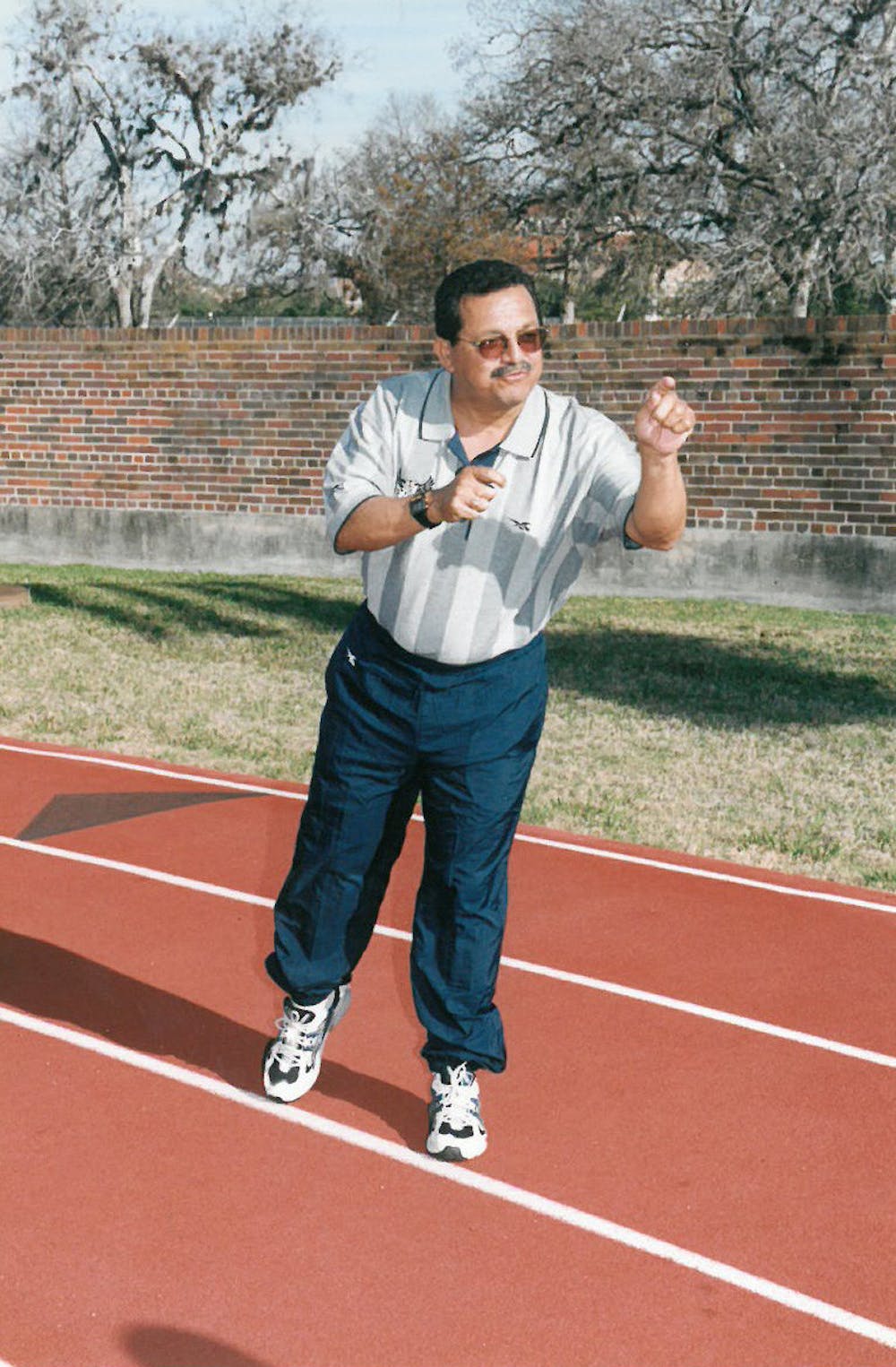 Fifteen years after retiring as the women’s track and field coach at Rice, Victor Lopez heard his name called during the induction ceremony for the Texas Track & Field Hall of Fame. As one of the seven members in the 13th class of inductees, Lopez now stands among the likes of nine-time gold medalist Carl Lewis and other Texas track and field legends. Although it is the most recent accolade for the retired track and field coach, it is just the latest of numerous awards and accolades that he earned throughout his career.

Lopez was born in Aguas Buenas, a small city in central Puerto Rico, as the youngest of four siblings. Growing up, he attended a primary catholic school and got into sports during the school’s recreational hour where Lopez said he was first introduced to organized athletics.

“[Sports] was in my blood and I loved it,” Lopez said. “In school and the summer, we would play games, run in the streets and run relays in the park.”

Lopez continued his education at a high school in a neighboring city called Caguas, where he continued his passion for sports. He played volleyball, baseball and track but also pursued music as a drummer in a local band. As the end of high school loomed near, Lopez said that he had a decision to make.

“I was in love with sports and I was in love with music so I was not sure where I would go in life,” Lopez said. “Should I continue with my sports life or should I go to a school of music and become a musician?”

In his last year of high school, a track and field coach came to his school in search of athletes who could potentially compete at the next level. Lopez started training with this coach and the results showed as Lopez went on to win sprint events and relays. Lopez said that turning into a great athlete was not only rewarding, but fun.

“I loved to run and when I was winning as a young kid, it gave me a lot of confidence and happiness in my life,” Lopez said.

During his final year Lopez was a junior national champion in Puerto Rico and earned interest from multiple universities from the mainland U.S. In the end, Lopez decided to go to the University of Houston, and in 1964, he enrolled as a student athlete. Although it was an exciting time, Lopez said that coming to the U.S. was still challenging.

“It was a shock to me because although I spoke English, when I got to the [United States], it was still difficult to adjust … to a different culture and a different language,” Lopez said.

Throughout college, Lopez competed as a Cougar as well as for the Puerto Rican national team. But his career was put on pause in  1967, when Lopez was drafted to the U.S. army during the Vietnam War. Following his service, he returned to Houston to finish his degree and use his final year of eligibility.

Following graduation, Lopez was a teacher in the Houston Independent School District for a few years before he got a call from a small college in Caguas, the University of Turabo, asking if he would be interested in the Athletic Director position. According to Lopez, he started the program from the ground up, and built up a winning culture in a short period of time.

“There was nothing there at all,” Lopez said. “No office, no equipment, no facilities. I had to start everything from scratch. I was there for six years and we won many championships in the university league. I was also the head track coach … and we had many athletes that made the national team.”

“When I first heard about the job from a friend, I was like, Rice University, you must be kidding,” Lopez said. “It was a shock to me but I accepted the job.”

Upon accepting the position, Lopez became the first coach of the women’s cross country and track & field programs. At the same time, Lopez was able to complete his Ph.D. at Rice as a graduate student while working as a track head coach. That year, the inaugural team had a total of six athletes, and according to Lopez, many thought that the program would not succeed.

“[When] we started a women’s track program … we had recruited six athletes,” Lopez said. “I took the job and started training that team. People told me those girls can’t even run. From that team, three of those girls became Division II national champions.”

Over his 35 years as the Owls head coach, Lopez worked with numerous athletes who would go on to win conference and national awards. Under his coaching, 58 athletes combined to win 176 NCAA Division I or Association for Intercollegiate Athletics for Women Division II all-America honors. On top of the success on the track, Lopez said he was equally happy with how his athletes succeeded in life outside of athletics.

“I coached and produced 11 athletes that went to be part of Olympic teams in the U.S., Jamaica, Barbados [and] Costa Rica,” Lopez said. “There were many great athletes … Regina [Cavanaugh] won six NCAA championships in the shot put. In other words, she only lost one championship in her four years when she competed for Rice… Now she is a medical doctor and a director of a children’s hospital. She was a fantastic athlete and great student.”

Although Rice track enjoyed lots of success, there were plenty of roadblocks and difficulties to overcome according to Lopez. Early in his tenure, Lopez said that it was hard to garner support for the brand new team.

“The toughest challenge was [getting] no support,” Lopez said. “One of the parents donated a van so we could go to track meets. I used to be a driver and we piled all the athletes in the van to go compete.”

Additionally, Lopez said that recruiting athletes was difficult in the beginning because of the high academic standards that Rice looks for in its applicants.

“Recruiting was not easy at Rice because of the academic requirements,” Lopez said. “There was a myth that was spread that you’re not going to find any academic athletes because athletes don’t like to study …  but I proved them wrong.”

“When I retired, they talked about all of my achievements in the athletic field,” Lopez said. “My proudest moment at Rice was having 100 percent of my girls graduate. We were probably one of the few with a 100 percent graduation rate. And [today], lots of them are in great positions in life like doctors, lawyers, others in finances and others coaches.”

After the 2005 season, Lopez retired as the Rice track and field coach. Upon retirement, Rice re-named the annual Rice University Bayou Classic track meet, which Lopez started in 1981 and at the time was the largest all-female track meet in Texas, the “Victor Lopez Classic.” He was also inducted to the Rice Hall of Fame and had scholarships named after him and his wife, Evelyn.

As a tribute to the success in the coaching field, Lopez has been bestowed with numerous awards and honors, including eight different hall of fame inductions, including the Texas Sports Hall of Fame, the United States Track and Field and Cross Country Coaches Association Hall of Fame, Texas Track and Field Hall of fame, and the Aguas Bueanas and Puerto Rico Sports Hall of Fame. Lopez said that although he is incredibly grateful for the awards and accolades, he cherishes his time at Rice the most.

“I consider Rice my second home,” Lopez said. “Just coming to campus every day at 7 a.m., it was like going to a [place of magic]. Inside the Rice campus, you felt like you were nurturing the development of young people through education and through sport.”

Outside of the city of Houston, Lopéz has been involved in athletics all over the world. In the 1990s, he helped train Michael Jordan during his three-peat as an NBA champion as a strength and conditioning consultant. In 2004, he  returned to Puerto Rico to coach their track team during the 2004 Summer Olympics in Athens, Greece and now works as a consultant with the national team that brought home its first track and field gold medal during the 2020 Tokyo Olympics. Lopez said that he was also in contact with Jasmine Camacho-Quinn before she won gold and set the Olympic record in the 100-meter hurdles in Tokyo.

Today, Lopez has since retired from the numerous chairman and presidency positions for track organizations and is now helping to organize a large professional track and field event, the Ponce Grand Prix. According to Lopez, the meet is one of the largest in Central America and the Caribbean and will feature numerous world champions and Olympic athletes.

Even in his retirement, Lopez expressed his gratitude for his time at Rice, and also for the alumni and supporters. He said that he will always cherish the family connections he created.

“I treated my athletes like my daughters or my own children,” Lopez said. “I was very strict but I listened to them, I cared for them. It was like a family.”