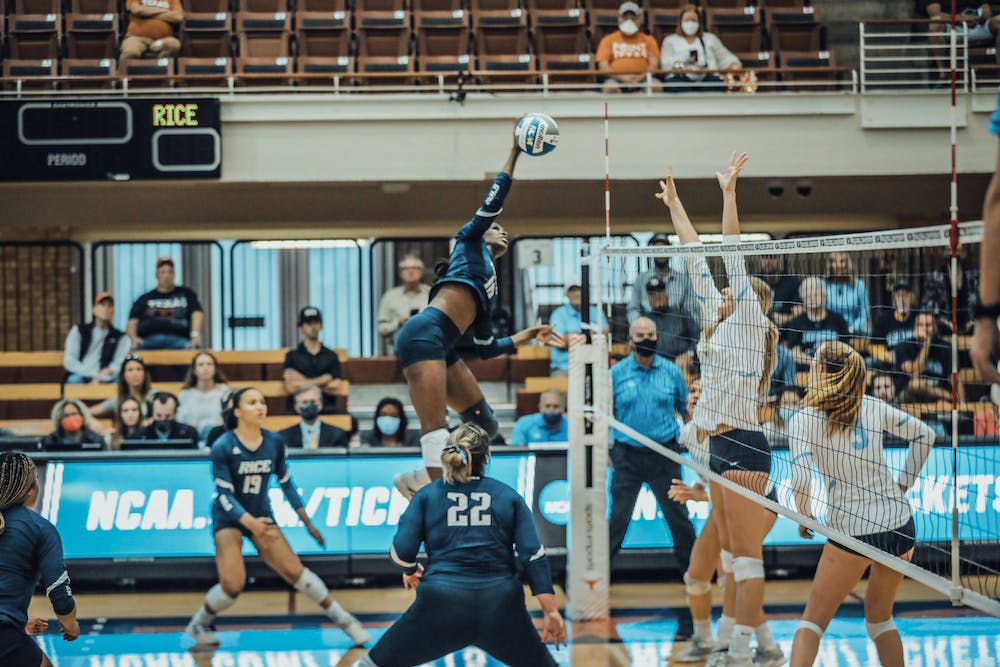 Rice volleyball will get another shot at No. 2 University of Texas, Austin after they swept the University of San Diego on Thursday in the first round of the NCAA tournament. The Owls took all three sets against the Toreros by at least five points, en route to the second victory in an NCAA tournament game in program history. After the game, head coach Genny Volpe said she was confident from the get-go.

“We trained, scouted and practiced at a high level this week, so I knew that the team was dialed in,” Volpe said. “Once I saw how dialed in this team was [today], I just had a really confident feeling.”

It didn’t take long for the Owls to get ahead in the first set. With the score tied at six, Rice went on a 5-0 run to build a convincing lead. The Toreros, who received the 27th most votes in the latest American Volleyball Coaches Association poll, never got within three points and the Owls took the set 25-20. The second set played out in nearly identical fashion, with Rice going on another 5-0 run, this time from up 10-9, to get out to a big lead, before putting the set away 25-19. The third set saw four different lead changes early, but Rice was able to pull away over the second half of the set and secure the win. According to Volpe, the team was able to get the victory because they kept their focus throughout the match.

“Obviously, we’re extremely excited about the result,” Volpe said. “I’m very proud of this team. I feel like they came out [knowing] what they wanted to accomplish and didn’t take anything for granted. [They] took it one point at a time and executed at a high level.”

According to junior setter Carly Graham, the win marked a triumphant return to the NCAAs for the Owls, who were set to compete in last year’s tournament before being forced to forfeit their first match due to COVID-19 protocols.

“[After] that devastation last year during the tournament, we were super excited to compete in this year’s tournament,” Graham said. “[We weren’t] taking anything for granted and just [went] out there and competed.”

Senior outside hitter Nicole Lennon led the way for the Owls in kills with 15, on a .417 hitting percentage. Four other Owls contributed at least seven kills, helping them outhit the Toreros .321 to .179. Graham pitched in a game-high 31 assists, 15 more than anyone else on either team. On defense, the Owls outpaced the Toreros in digs by a 53 to 39 margin, and won the battle at the net as well with eight blocks compared to just five by USD. But according to Volpe, the real key to the Owls win was their serving, which allowed them to disrupt San Diego’s fast-paced attack.

“I’m proud of how [we] served tonight,” Volpe said. “I thought it was difficult for San Diego to get their offense going. They're an extremely efficient offensive team, they run it fast, so we knew that was going to be imperative.”

The Owls will now turn their attention to an opponent they are more than familiar with in the Longhorns, as they look to become the first team in program history to reach the Sweet Sixteen. The two teams met earlier this year at Tudor Fieldhouse, in what turned out to be a lopsided Longhorn victory. But in each of the previous two seasons, Rice upset Texas teams that were ranked in the top three in the nation. According to Lennon, the Owls know that if they play at their best, they can beat any team in the country.

“We believe in ourselves completely,” Lennon said. “Whoever we play, we’re going to come out and play Rice volleyball, that’s for sure.”

Led by outside hitter Logan Eggleston, a two-time Big 12 player of the year, and middle blocker Brionne Butler, who ranks second nationally in hitting percentage, the Longhorns enter the game with a record of 25-1 after their win over Sacred Heart University in the first round. They began the season as the top ranked team in the country, but fell to No. 2 after their sole loss, against Baylor University, on Nov. 6. Outside of the Baylor loss, they have dropped just four sets since the start of conference play. As one of the top 16 seeds in the tournament, Texas will have home court advantage on Friday.

The match is set for 8:00 pm on Friday at the Gregory Gymnasium in Austin.