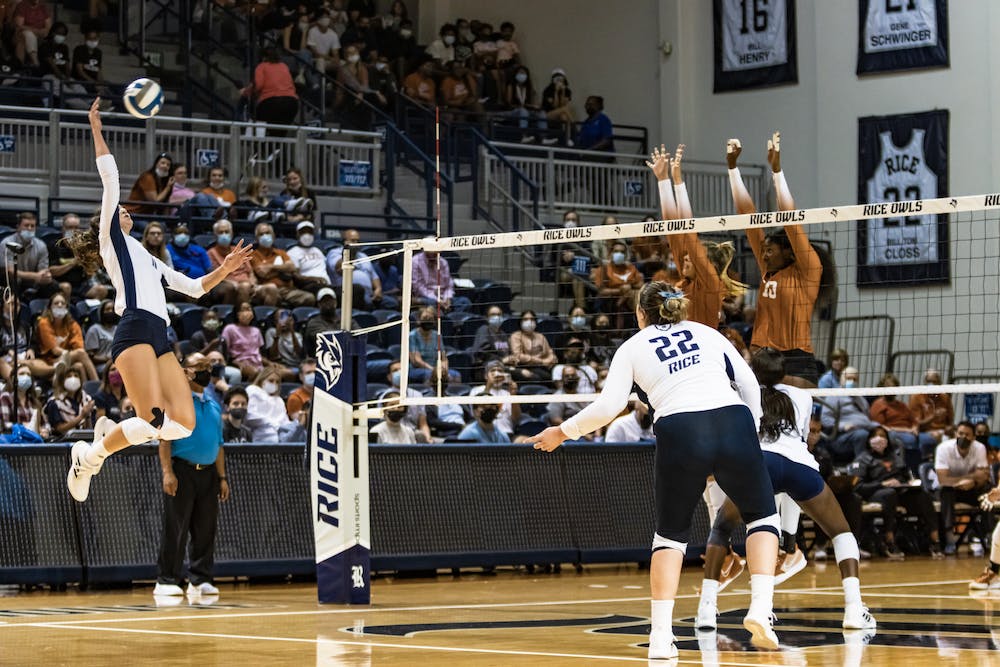 Rice volleyball will face the University of San Diego tomorrow in the first round of the women’s volleyball NCAA tournament. This is the fourth consecutive season in which the Owls will be selected, after they received an at-large bid on Sunday night. Rice returns to the tournament after being forced to exit prior to their first match last year due to COVID-19 protocols.

According to head coach Genny Volpe, the selection process was a bit stressful but the team is ready to embrace the challenge ahead of them.

“[The bracket announcement] was really dramatic this time because we were like the third or fourth last team called,” Volpe said. “We feel very blessed and we’re definitely excited to compete. I think after what happened last season it just brings to light even more that you never take opportunities for granted and we’re definitely excited to get back out there and compete.”

The Owls, who now sit at 19-6, will face a 20-7 San Diego team that has had its share of tough opponents this year, including an upset victory of the University of California, Los Angeles, who finished the year ranked No. 13.

Rice opened their season with a 5-5 record in non-conference play, with four of those losses coming at the hands of top 15-ranked teams, including the University of Texas, Austin, who finished the season ranked No. 2 in the nation.

From there, the Owls went 12-0 in conference play, losing just five sets in the process. According to junior setter Carly Graham, who was recently named Conference USA Setter of the Year, the team was able to maintain a high level of play throughout the year thanks to the quality of players they have up and down their roster.

“I think one of our biggest strengths is our depth,” Graham said. “Every day in practice is competitive due to that depth and we are able to train and compete against one another every day. I think that translates well into being able to be prepared for matches.”

Led by senior outside hitter Nicole Lennon, junior middle blocker Anota Adekunle and Graham — all of whom were named first-team all-Conference USA — the Owls headed into the C-USA tournament. They were the No. 1 seed in the C-USA West and quickly reached the final round of the tournament, but they fell to No. 18 Western Kentucky University for the third consecutive year.

A few days after the game, WKU head coach Travis Hudson took to twitter to say that the Owls are “definitely one of the best teams in the country.”

As the team heads back to another national tournament, Lennon said that their veteran leadership will be an asset to the team as they attempt a tournament run.

“Our biggest strength right now is our experience,” Lennon said. “We’re a veteran team, with some of us having this be our fourth time heading to the tournament. We are hoping that strong leadership and knowledge will take us to the next level.”

According to Volpe, one specific area of their game that the Owls will look to improve on during their tournament run is their performance from the service line.

“​​I would like to see our team work towards a more aggressive serve during this postseason run,” Volpe said. “It is an area of our game that is definitely improving, but we can always get stronger here and it will help us attack our opponent and create problems for their offense.”

If the Owls can get past the Toreros in the first round, they will likely find the Longhorns waiting for them in the next round. UT beat the Owls in straight sets earlier this year, after Rice had won the previous two meetings between the in-state rivals. According to Graham, the team is going to relish playing in the big moments, no matter who is on the other side of the net.

“With the devastation of what happened at last year’s tournament, we are so thankful to get to compete in it once again,” Graham said. “It gives us the mindset to take advantage and enjoy these big moments of being able to compete. I think there’s been a lot of intention and great competition at practice during the postseason. We are all so excited to dance in the NCAA tourney.”