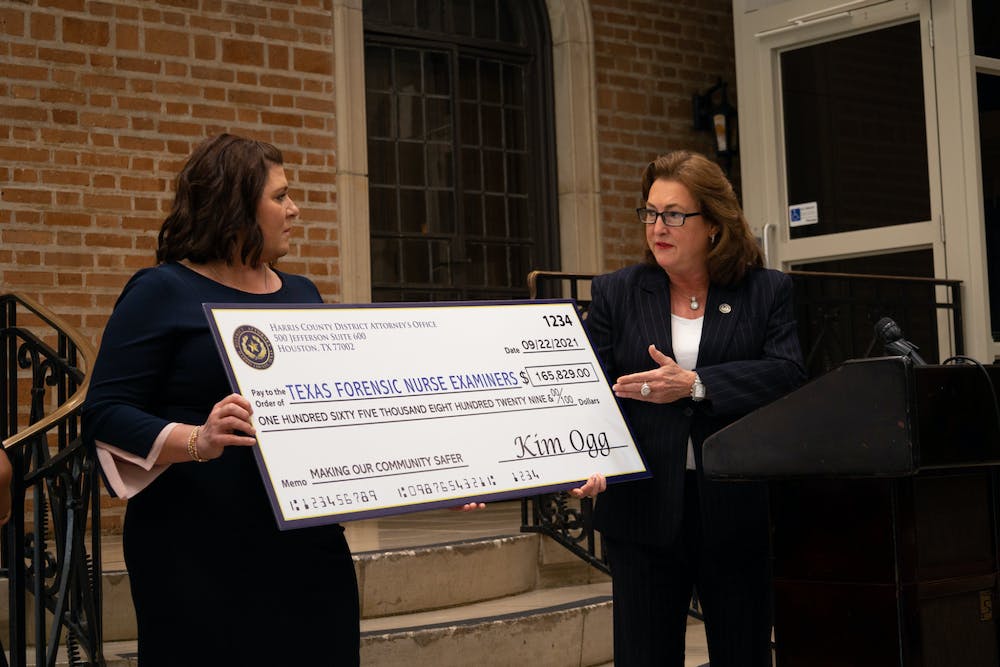 A new partnership between the Texas Forensic Nurse Examiners and seven Houston-area universities, including Rice, will provide students free and faster access to sexual assault nurse examiners, Harris County District Attorney Kim Ogg announced at a press conference Thursday at Rice. A $165,829 grant from Ogg’s office will fund part of the program for one year, she said.

Rice has worked with TFNE since 2019, according to Deputy Title IX Coordinator Allison Vogt, and was the first school in Texas to have such a partnership. Nothing substantive will change at Rice, Vogt said.

The other six Houston-area colleges are the University of Houston, Prairie View A&M University, Houston Community College, Texas Southern University, Lee College and the South Texas College of Law. As part of the program, the services sexual assault nurse examiners provide will be more accessible to students at those universities, according to a press release from Ogg’s office.

“Students will now have free access to sexual assault examinations by a qualified interviewer including transportation to the interview, a sexual assault hotline, assistance with legal services, access to support groups [and] a tailor-made response for treatment,” the press release said. “Campus communities will also have access to future seminars on preventing sexual assault presented by the District Attorney’s Office.”

At Rice, Vogt said that staff from TFNE will come to student health services during its operating hours.

Statistics from the Rape, Abuse and Incest National Network show that at least a quarter of undergraduate females and one in fifteen undergraduate males nationwide experience sexual assault, a key motivation for the program, according to TFNE Founder and Chief Executive Khara Breeden.

Ogg said she believes providing survivors access to services is part of a college’s responsibilities.

“These are the types of not just awareness but direct services that universities and institutions of higher education must have available, because you are children’s homes at least for four years, sometimes more, and you are held accountable for so many things that are beyond just education,” Ogg said.

Two University of Houston students proposed this partnership, according to Ogg. One of them, Jack Jordan, is Ogg’s son.

“This is a really awesome thing we did, but this is just the first step,” Jordan said at the press conference. “The next step is taking this statewide and if possible nationwide.”

The universities’ partnership with TFNE is the first of its kind in the state, according to Isaiah Martin, the other student.

“There are 143 different four-year universities and 63 two-year colleges that make up our state’s framework for higher learning,” Martin said. “But of all of those, our county now has the only program created specifically by survivors for survivors.”

Ogg said she is not aware of any similar partnership in the United States.

“I have not, in my travels and knowledge of other elected DAs, heard about a program like this,” Ogg said.

“We have a 120 hour window in the state of Texas … where we can collect physical DNA evidence from a victim of sexual violence,” Breeden said. “Even when victims are outside of that window, they still have medical issues that they should be seen for. Sometimes victims aren’t ready in 120 hours. Sometimes they can’t get themselves out of bed and they haven’t processed what’s happened to them. If they show up two weeks later, we’re still going to see them.”

Hospitals can sometimes take eight hours to complete a forensic examination, according to Vogt. Through the partnership with TFNE, this process usually takes 30 minutes to two hours, Vogt said.

According to Ogg, law enforcement officers sometimes conduct interviews of sexual assault victims, which Ogg said could be “gruff.”

“When I first became the DA, I also learned that not all hospitals had SANE nurses, trained professionals,” Ogg said. “Even still, cops continue to interview victims when victims had the courage to report … I think it's very important that we have trained professionals who look and sound and can relate with victims more.”

Additionally, hospitals can bill victims for any further services, but by partnering with TFNE, students can avoid the cost and any potential issues of privacy, according to Vogt.

“Our students who don't want their parents to know [but] who are on their parents' insurance don't want to have to go to a hospital [and] show their insurance,” Vogt said. “[This partnership] also creates a layer of privacy.”

The money behind the $165,829 grant from Ogg’s office comes from asset forfeiture dollars, Ogg said.

“We took forfeiture funds … instruments of crime, left behind or seized from criminals by law enforcement, lawfully forfeited in the courts after due process,” Ogg said. “We took the people’s money and reinvested it in victims by helping, through this money, give [TFNE] the opportunity to train, hire and utilize forensic interviewers.”

The rest of the funding for TFNE’s work comes from sources such as state grants, according to Ogg.

“All the money comes from elsewhere,” Ogg said. “None of the universities are paying a penny.”