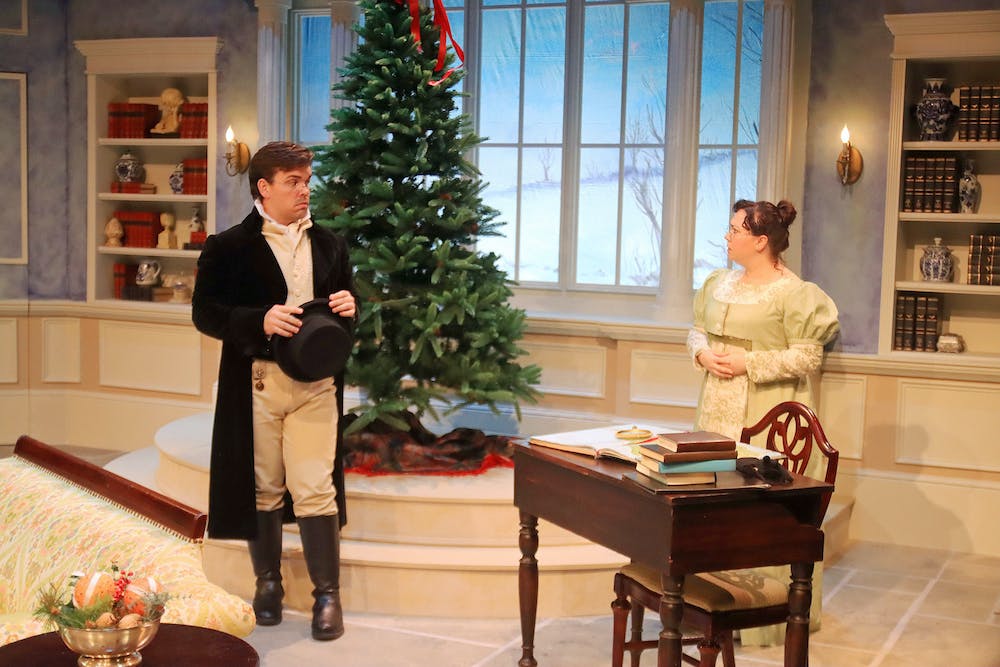 When it comes to holiday media, I’m a tough sell, but when it comes to “Pride and Prejudice,” I’m an ardent fan, and I was more the target audience for the show than any Hallmark Christmas movie devotee. The script thrives when it embraces its roots, with jokes and references to the original novel as well as its previous film adaptations that allow the play’s material to shine. That being said, my friend who attended with me knew nothing about the source material beyond my two-minute summary and still enjoyed the show, missed jokes and all.

Main Street Theater itself is an intimate space. With the audience observing the small set that makes up Pemberley from three sides, no one feels truly distanced from the actors. The space available dictates the coziness of the set, not quite the expansive Pemberley, and costumes convey a sense of elegance without taking away focus from the actors. Light piano between scenes takes the audience along for the play’s easy journey, underscoring the characters’ silent activities. Gunderson’s script provides ample material for the cast and crew with its sparkling wit and humor.

The chemistry between the couples was evident when Elizabeth (Skyler Sinclair) and Mr. Darcy (B. Connor Flynn) begin the show with an easy back and forth as they discuss the Christmas tree in their drawing room — there well before Queen Victoria brought the German tradition to England, something that becomes the running joke of the show. Gabriel Regojo delights in the role of Charles Bingley, portraying him with such earnestness that I couldn’t help but feel fond of Bingley. Jane imbues every scene with a sense of sisterly affection that is crucial to the show’s success. Anne (Lindsay Ehrhardt) and Lydia (Alexandra Szteo-Joe) take over the stage with unexpected dimensions to their characters.

Mary and Arthur are a natural pair from the books they carry with them (copies of Lamarck’s “Zoological Philosophy” that are identical besides the color of the cover), echoing each other’s socially inept remarks that create distance between themselves and the rest of the ensemble and Moore and Alford’s quiet chemistry that sustains the show.

However, very few missteps are still missteps. While the couples share easy camaraderie, the familial sense among the ensemble, especially the Bennet sisters felt lacking; the show thrives in tension but fails to give a satisfying sense of connection as the interpersonal conflict is resolved. Accents were inconsistent among the cast as well as through the duration of the play.

However, the show kept me engaged with “Pride and Prejudice” references to spare and the blooming romance between Mary and Arthur that culminates for a satisfying payoff. Whether to inject holiday cheer into the end of the semester or fantasize through a romantic comedy, “Miss Bennet: Christmas at Pemberley” is a worthwhile watch.