Uyghur activist speaks at Rice on genocide in Xinjiang 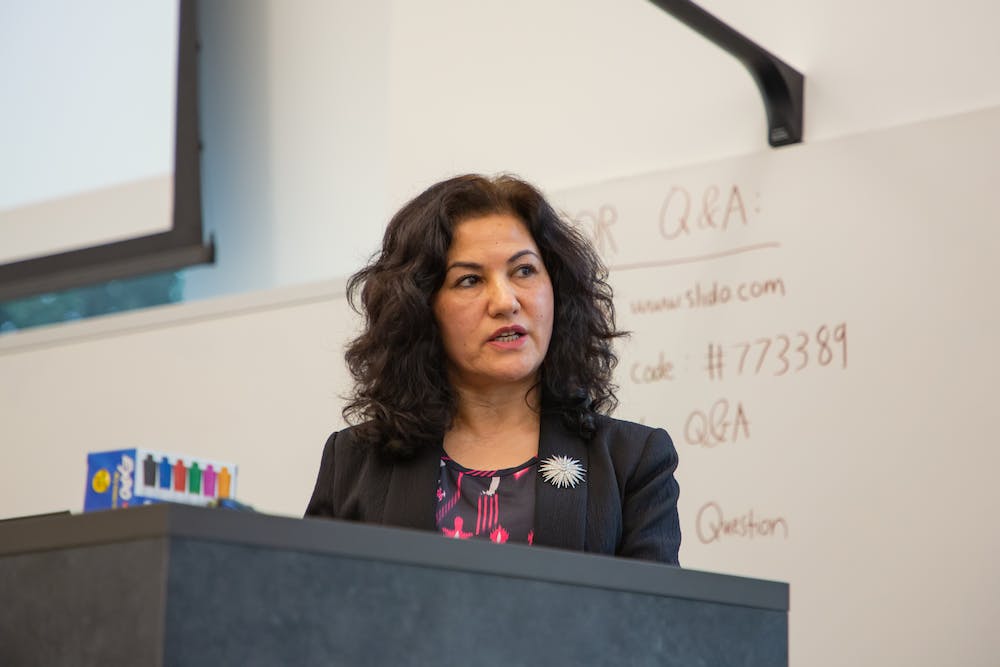 Rushan Abbas spoke at Rice last Thursday on the ongoing genocide of the Uyghur people in Xinjiang, China. Abbas has been an advocate for the Uyghur people since the 1980s, and has been affected by this crisis on a deeply personal level, according to sociology lecturer Craig Considine.

Considine said he invited Abbas to speak at Rice to bring to light a severe human rights issue that is not talked about enough in the public sphere. He said he hoped students would resonate with Abbas’s personal perspective.

“Just bringing Rushan here and having her share these images and these personal stories, this type of knowledge I think can really resonate with Rice students, and really any human being,” Considine said. “This story touches your heart, your soul, it brings up compassion, it brings up anger. I think that is something students need.”

According to the U.S. State Department, up to two million Uyghurs and other Muslim minorities are believed to have been placed in detention centers across the region of Xinjiang. Abbas displayed images during her presentation of now emptied streets in the once lively city center.

During the presentation, Abbas shared testimonies of what the Uyghur people are being subject to, including forceful marriages, illegal harvesting of organs, forceful forsaking of ethnic and religious identities, mass rape and forced labor.

“This is like a warzone, but this is what every local person [is] subject to,” Abbas said at the event. “People like yourselves: students, professors ... university presidents, doctors, successful business people and even just regular people living daily lives.”

In her talk, Abbas said that her sister has been missing for three years, and despite constant attempts to find her, she has no information about her whereabouts.

“This is all connected very personally to me, as I am speaking to you today at the cost of my own sister’s freedom,” Rushan said at the event. “She was taken six days after I spoke at one of the think tanks in Washington, D.C., [the] Hudson Institute, as retaliation for openly speaking about the genocidal policies, talking about the conditions of the camp while outlining my husband’s family ... my husband’s entire family was missing from April 2017.”

In her talk, Abbas said that after flying to New York to deliver a speech for Columbia University, she was denied the opportunity to speak due to pressure from some Chinese students.

Considine said he was surprised to hear what happened in Columbia and appreciated that it did not happen at Rice.

“The fact that we were able to pull it off at Rice I think speaks to the type of community we are trying to build, one that is not uninterested in engaging in these difficult conversations about major life events,” Considine said.

“I knew enough to know that [the issue] demanded a lot of attention and awareness,” Worley said. “I do not think there is a lot of true in-depth awareness about what is actually happening, and unfortunately there is a lot of political pressure that has prevented different people in the US and different groups from addressing the crisis.”

Ambreen Younas, one of the MSA vice presidents, said that the MSA also got involved with the event to spread awareness in the Rice community and to show support to the Muslims subject to the atrocities.

“I’m hoping that this event serves as some sort of wake up call to the Rice community and that people actually start caring about this issue more,” Younas said.

Worley said that he believes the university should put more attention on this crisis, as many universities are pressured not to pay attention to it.

“I would like to see Rice step up and address that because many Rice students and faculty are Muslim, and I think that addressing Islamaphobia definitely requires addressing a genocide that is affecting millions of Muslim people that many people at Rice could be connected to,” Worley said.

Fayiz Faruk, one of the MSA vice presidents, felt that as a Muslim it was important he attended the event to learn more about the Uyghur people and the challenges that they were facing in this region.

“I was heartbroken and ashamed of the fact that Muslim-majority countries have done little to help the Uyghur people, and I came out of the event learning about the vast amounts of popular companies that do use Uyghur slave labor, which was also very disheartening,” Faruk, a Duncan College junior, said.

Worley said that he urges students to educate themselves on this genocide and support it by researching companies that profit off of Uyghur slave labor and asking their representatives to address this issue.

“I know that we all have busy lives and we have limited time, but this is something that is absolutely worthy of everyone’s time to research, to look up, to look into, to attend events on campus,” Worley said.