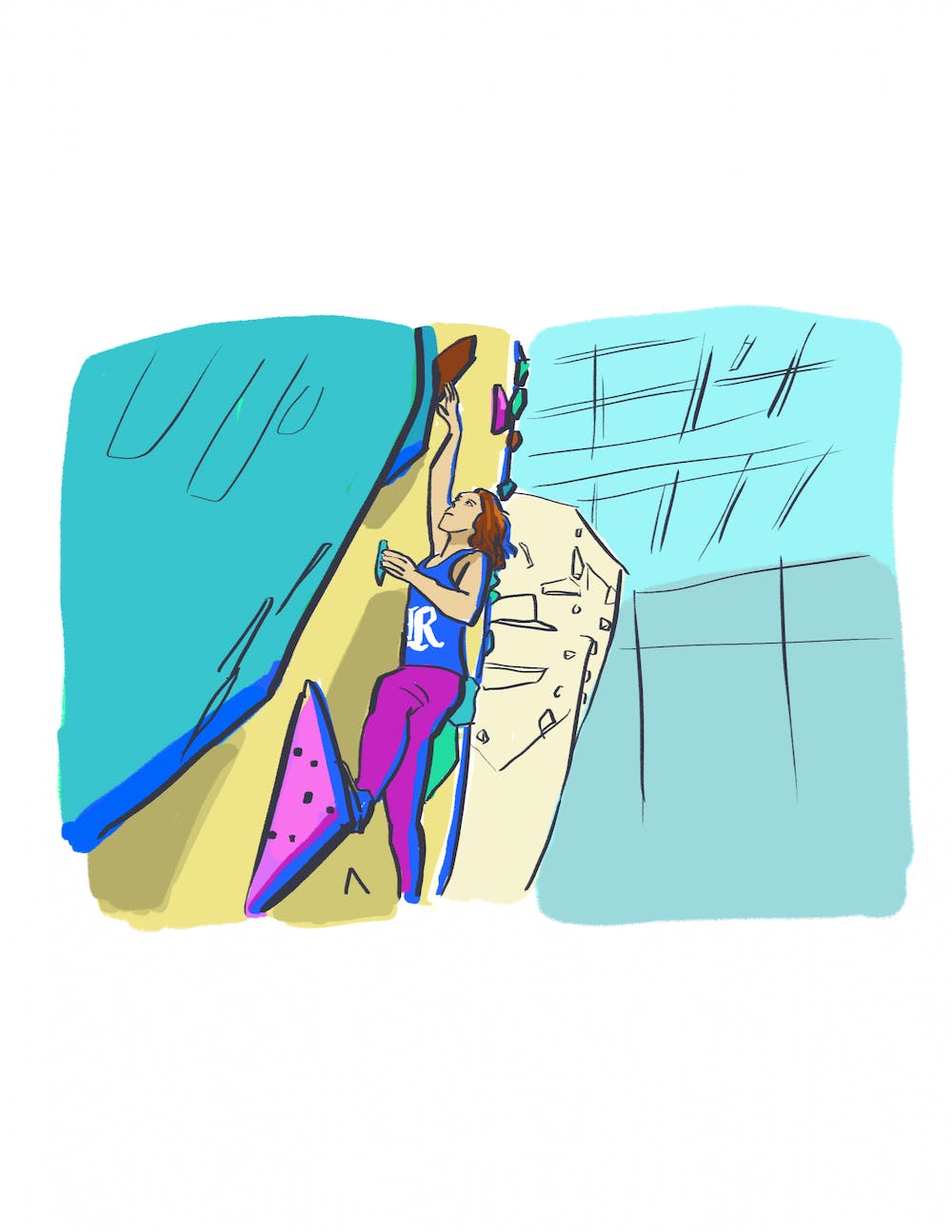 Varsity athletes aren’t the only Rice students who compete in sports at high levels. The Thresher talked to three students who participate in national competitions in sports that Rice doesn’t offer, on how they started their sport, their training and what their sport means to them.

When Brown College freshman Ellie Sepulveda was 12, she fell in love with rock climbing after her first climb with her friend from summer camp. Sepulveda said she has been doing rock climbing for seven years and rock climbing to her is like doing a puzzle.

“It’s not just about how strong you are, how powerful you are, a lot of it has to do with how you’re able to come up with a creative solution to climbs problems,” Sepulveda said. “So you’re essentially solving a problem every time you climb. You have to use  a mix of technique, balance, strain, flexibility to come up with the way that works best for you to get to the top.”

“If you make one mistake, you’re done,” Sepulveda said. “So it’s a lot more stressful than bouldering. Because if you mess up on a boulder, you can try it again. I’ll leave out if you mess up. That’s that. And I like the pressure. I think I do well under that type of pressure.”

Sepulveda said she has been to a number of national championships, six world cups and has also climbed for the Puerto Rican national team. As the highlight of her career, Sepulveda said she won the youth Pan American championships in 2019. According to Sepulveda, she got the opportunity to go at the last minute and decided to try to make the most of it.

“I wasn’t planning on going and then kind of suddenly, I had this chance to go,” Sepulveda said. “I had a pretty relaxed attitude, I didn’t really expect much for myself.I think it’s why I was able to do really well because I was just focused on climbing to the best of my abilities, instead of focusing on winning the competition.”

While at Rice, Sepulveda continues to train when she’s not in class, whether with her coach or on her own. Sepulveda said she aims to  qualify for the Olympics in 2024 or 2028.

“I work with a remote coach, so she gives me a workout [and] kind of gives me guidance on how to train,” Sepulveda said. “And I do my own training, usually on my own or sometimes with other people, like with friends I have in the area or with the climbing club. I think it’s really nice to climb with other people because you can learn from their techniques, like how they solve the climb. But for the most part, I’m doing my own thing. When I’m at the gym, I like to just focus on what I’m doing.”

Matt Cheung, a grad student from the electrical and computer engineering department, said there are various disciplines of cycling, like road biking, where people ride slim tires on asphalt, and mountain biking, where people ride on trails. Gravel racing is a less common discipline of biking that has been repopularized over the past couple years, according to Cheung.

“Gravel racing combines the endurance testing lengths of road racing, with the technical ability of mountain biking,” Cheung said. “In gravel racing, there are no limits to what you can see on the racecourse. So you can come across anything from really smooth and silky roads, loose clay, sand, big rocks, technical single track, and even like river crossings.”

Cheung said a highlight of his racing career was the Belgian Waffle Ride this past July in San Diego, with a couple of friends. Cheung said the ride, which was rated as one of the most important in the country by cyclingnews.com, is 132 miles with 11,000 feet of elevation.

“It was the first race I did on a gravel bike,” Cheung said. “And it's probably the craziest ride I'll ever do. As I said, it's in the spirit of the race. Everyone runs like skinny road tires. And the idea is to be under-biked, which means you don't have  good enough equipment to be able to tackle the technical sections of the course.”

Though the race itself was difficult, Cheung said that getting into gravel racing was one of the best decisions he has made, as he gets to see cool places, have fun and self-discover.

“It’s a lot of alone time in which you can find out what you're capable of doing, how much you can push yourself,” Cheung said. “And just looking at life philosophically, I think there's something profound that you can find within yourself, when you go out on these big gravel rides.”

When she was 13, Katherine Wu took up archery after watching The Hunger Games, and now she has been doing archery for eight years now. Wu said she sees archery primarily as a mental sport but is also very physically demanding.

“I see it as requiring a lot of mental toughness, because it requires so much focus and the tournament’s are very long,” Wu, a McMurtry College junior said. “They go on for multiple hours and over the course of multiple days, and so you need to be able to focus for very long periods of time.”

Wu competed in the Olympics trials for archery this past summer. Wu said that Olympic trials is such a long process that she really gets to bond with the people even though they are all competing against each other.

While she didn’t make the Tokyo Olympics, Wu said she continues to train and hopes to return to the trials for Paris 2024.

“I’m a junior now, so I’m already starting to prepare for [2024],” Wu said. “I’ll probably take a gap year before heading to medical school so that I can train full time. And hopefully that training will continue on to the next Olympics 2028.”

Wu said when she goes back home for summer break and winter break, she will train with her coach. While at Rice, Wu said she practices archery in the mornings on the intramural fields behind the Rec Center, before heading to class.

“I met [associate director, programs Elizabeth Slator and assistant director of competitive sports Chris Watkins] after I came to Rice,” Wu said. “That was when I was trying to figure out how I can continue to continue to train here. And they were able to get me that locker space and they’re able to give me access to fields. Without them, I wouldn’t have that field.”

Wu said she is more of a whole person when she is growing in archery and her life becomes more colorful.

“My bow is extremely precious to me,” Wu said. “I don't even let my parents touch it. It’s only me that can touch it and my coach. It really feels like an extension of my hand and my arm and when it's in my hand I feel complete. And I feel like I can do things that I can't without it.”