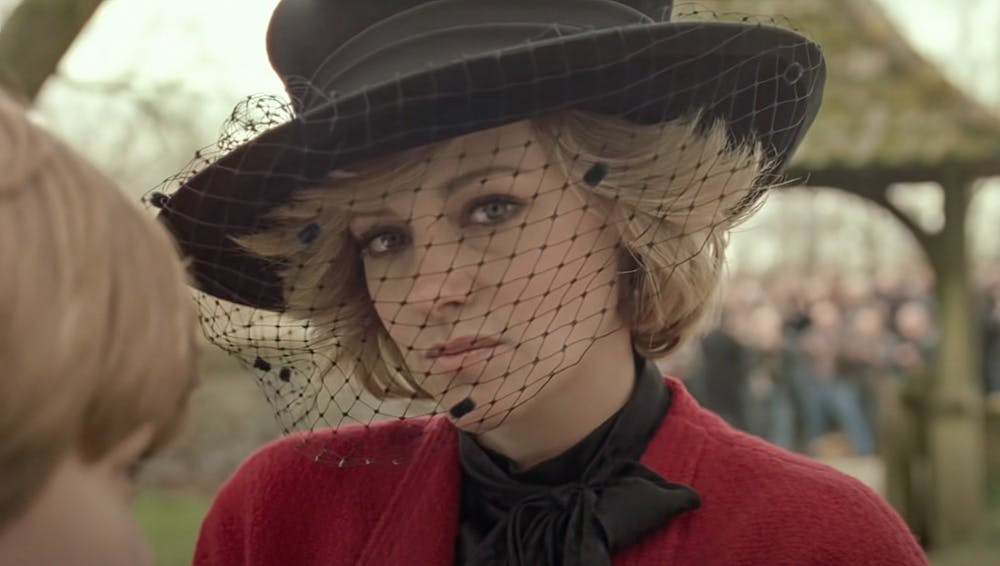 It is hard for me to view “Spencer” as anything other than a pinnacle of Kristen Stewart’s acting abilities. Playing Princess Diana Spencer, one of the most famous, most photographed people in the entire world, is a daunting task — and not one that I ever expected to be taken on by Stewart. Considering all of the jokes over the years, whether they be about her stint in the “Twilight” series or her awkward, nervous demeanor in interviews, it was hard for me to imagine the actress taking on such an iconic biopic, especially one that has been done to both great laud and great mocking before. However, it is her performance precisely that makes “Spencer” shine.

“Spencer,” at its purest core, revolves around two things in Diana’s life: fashion and food. Her relationship with these two things, according to the film, were her starkest forms of defiance in a place where outward, vocal defiance would have spelled disaster for the mother of two. “Spencer” follows three days in Diana’s life shortly before she leaves the royal family: Christmas Eve, Christmas Day and Boxing Day of 1991. Here, we watch the royal family celebrate the holidays in their precise, ritualistic manner, with all eyes locked on Diana for her recent behavior.

Sensing these watching eyes and their disapproval, the princess takes measures to regain control over her life through what she wears and what she eats, switching her clothing schedule and throwing up her meals after she eats them on multiple occasions. An old jacket of her father’s has a particular significance from beginning to end and a pearl necklace, gifted to her by her husband, Prince Charles, becomes a focal point in this struggle and seems symbolic of the struggles this relationship imposes on her. This is because the prince gave this same necklace to his mistress, Camilla Parker-Bowles. Throughout various parts of the movie, the audience witnesses Diana’s hatred of the necklace as she hallucinates swallowing the pearls in an attempt to kill herself and breaks them off her neck at the encouragement of a hallucinated Anne Boleyn, the former Queen of England who was executed so her husband could marry another. Boleyn’s presence and parallels to Diana’s situation are emphasized and a critical reflection of Diana’s mental state.

Gorgeous costume pieces aside, they would be nothing without Stewart’s incomparable performance. Stewart takes such a nuanced, intellectual approach to the role that, at times, I could not tell it was even her. She seems to have such a deep understanding of the script that it’s entrancing to watch. On multiple occasions within the film, it is said that there has to be two of her. In the words of Prince Charles: “the real you and the one they take pictures of.” Stewart switches between these two personas with ease, alternating between the sweet, mild-mannered Diana familiar to the public and the cursing, passionate one the film imagines her to really be behind closed doors.

This imagining is an advantage afforded to the writer, Steven Knight, because he chose to write “a fable from a true tragedy.” “Spencer” is a fictional portrayal about what he believed may have happened during these very real three days. It is a brilliant choice and one that makes a lot of sense given the reception of “Diana,” a 2013 biopic that hastily tried to cover years of the princess’s life and was met with critical disdain. It seems that trying to accurately portray a large portion of Diana’s life is not the move — unless you’re “The Crown.”

However, the script certainly isn’t perfect. There is a lack of natural tension-building, as the stakes are seemingly heightened from the beginning, and the interweaving of hallucination sequences sometimes become confusing. There are other shortcomings as well, namely from Pablo Larraín’s directorial choices. Extreme close-up shots are utilized frequently throughout the film, which not only come off as awkward but throw you out of the world he has tried to build. It is hard to believe you are watching Princess Diana when you are so close to her face that you can clearly see Kristen Stewart’s every identifiable feature.

Even with these flaws, it may be difficult to walk out of the theater and be anything but blown away by Stewart. She elevates the film to new heights with her transformative Diana. If there’s one thing that the Academy loves, it’s transformation. So if you can catch “Spencer” in theatres this month, I would highly recommend it. If not, don’t worry, I imagine you’ll be seeing it — namely Stewart — at the Oscars next year.