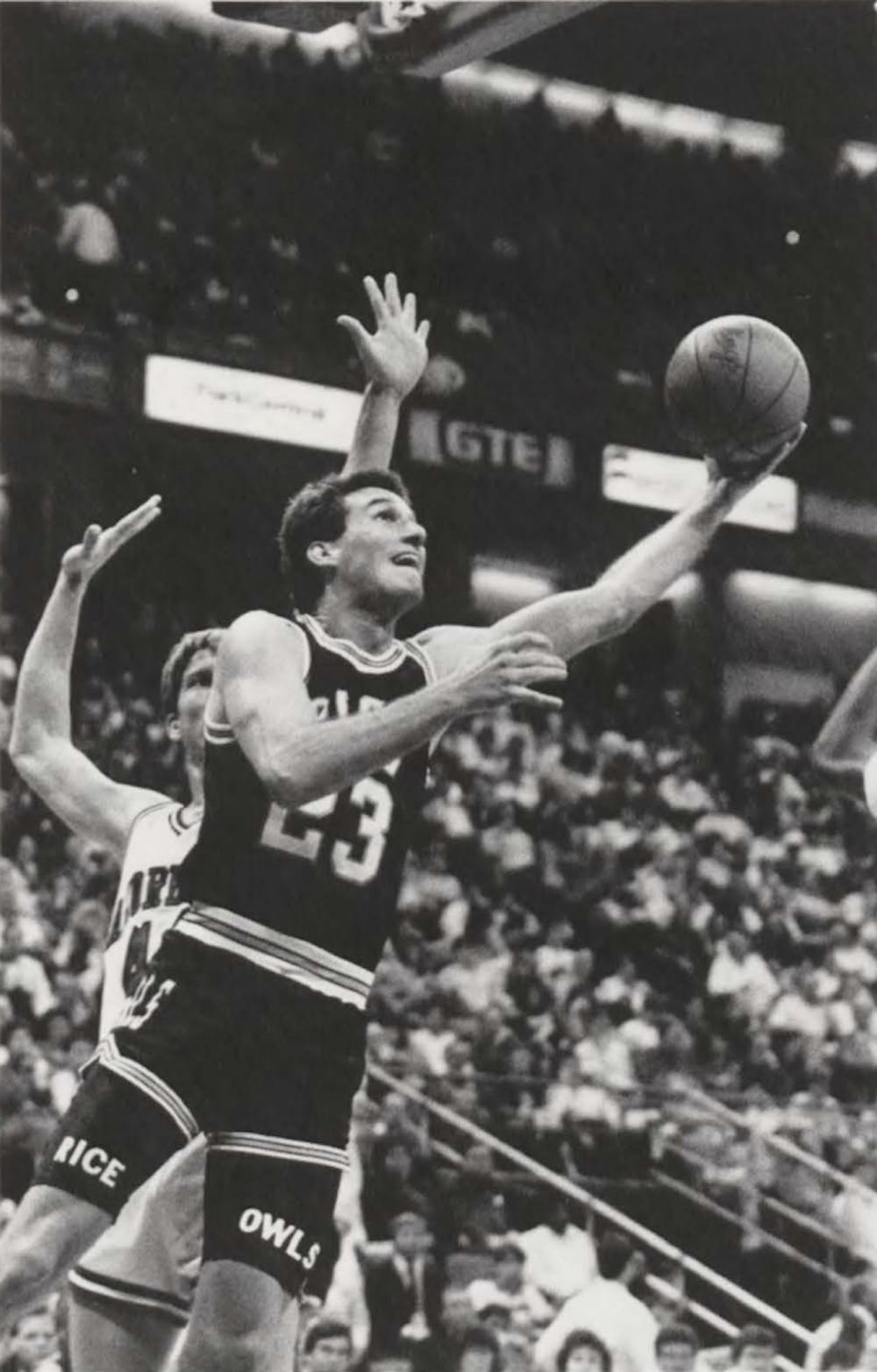 Before Glenn Youngkin (Will Rice College ’90) was elected governor of Virginia, he was once a Rice student;  double majoring in mechanical engineering and managerial studies, Youngkin also played on the Owls’ basketball team.

“Glenn was always there with a positive energy, encouraging everyone else on the team,” Thompson said. “Even though I knew he had been studying [for] his engineering courses until probably early in the morning [and] I knew he had been up all night, and here he was coming and just being fired up.”

Thompson said that when recruiting season came, Youngkin was one of the players he wanted recruits to be around.

“He was very high on being at Rice,” Thompson said. “He was always positive and enthusiastic about being at Rice University and being an Owl. He was the type of guy that really helped our program [grow] into a positive program.”

Thompson said Youngkin’s enthusiasm was driven by desire to be a leader. At the award ceremony at the end of Youngkin’s senior season, the other players on the team voted him “most inspirational,” according to Thompson.

“He just always wanted to be a good leader for the other guys,” Thompson said.

Thompson said balancing academics and athletics at Rice was difficult, especially for the few engineering students on the basketball team like Youngkin.

“It’s hard to go through engineering and have time to compete on the basketball court or going to practices and traveling and things like that,” Thompson said. “It’s not easy because you’re competing against the best students around in the classroom ... and you gotta take it seriously or you’re not going to make it at Rice.”

Thompson said he finds it rewarding to know that one of his players will be a governor. Youngkin in particular had great time management skills and was serious about his education and future, according to Thompson.

“He’s the type of young man I felt was going to be successful in whatever he did,” Thompson said. “I’m happy for him because he’s a very hard worker and he’s a good leader and he’s given back to Rice. He loved and still loves Rice University.”

Youngkin’s leadership at Rice extended beyond the basketball court. According to the Sept. 15, 1989 issue of the Thresher, Youngkin co-coordinated Volunteers for Youth, a program involving approximately thirty to forty Rice athletes. The Big Brother/Big Sister-type organization paired Rice athletes with students from Lanier Middle School to serve as role models for underprivileged children.

“The main focus of [Volunteers for Youth] is to sponsor friendships,” Youngkin said at the time.

Youngkin also publicly defended Rice’s athletic programs in the Jan. 27, 1989 issue of the Thresher. In the issue, Youngkin wrote an opinion piece in rebuttal to a criticism of Rice athletics by former Rice history professor Gale Stokes. After arguing in favor of the competitiveness of Rice athletics, Youngkin replied to Stokes’ contention that student-athletes distort the “composition of the student body.”

“I’m not sure why Dr. Stokes didn’t just come out and say ‘dumb jocks,’” Youngkin wrote. “Athletes are not the only group of students whose SAT scores are omitted from university averages. Athletes’ overall contribution to the university should be considered just as that of a master violinist or skilled artist. In addition to the identical graduation requirements as every other Rice student, athletes must balance a hectic practice, game and travel schedule.”

In the opinion piece, Youngkin said that without basketball, he knew he would not have been able to attend a university like Rice — an opportunity for which he was grateful.

“As a student first and a varsity basketball player second, I am fully aware of the conflicts that exist between athletics and an academic institution like Rice,” Youngkin wrote. “I cherish all those aspects that make Rice what it is.”

In the piece Youngkin also replied to Stokes’ argument that “big-time” athletics are not compatible with Rice’s interests as a small university.

“Rice is a small school with a ‘bigtime’ reputation,” Youngkin wrote. “Our graduates do ‘big-time’ things and Rice is known for excellence around the world. Why should we limit ourselves and not pursue a very attainable goal? Rice can compete and win, as many of our teams have already demonstrated.”

Youngkin ended the opinion by highlighting the positive relationship between athletes and nonathletes at Rice.

“The seventy-five percent of the student body that regularly attends home basketball games, painted faces, the MOB at halftime, the social events that surround football games, the drive and spirit to make Rice’s teams winners, and the camaraderie that is not divided by a athlete/non-athlete line,” Youngkin wrote. “This is Rice and it runs far deeper than a losing streak in football or a low gate receipt.”

Youngkin’s ties to Rice remain visible on campus. Youngkin donated funds to renovate the Tudor Fieldhouse in 2008, according to the Rice Facilities Engineering and Planning website. During this renovation, the one-story administration area was replaced by the two-story Youngkin Center, which includes an academic center for student-athletes, a training center and offices for the coaching staff.

Youngkin’s donation reflects the pride for Rice athletics that he conveyed in his opinion piece.

“Rice athletics will succeed through continued hard work and support,” Youngkin wrote. “I’m glad to be a part of it.”