Men’s basketball to rely on experience this year 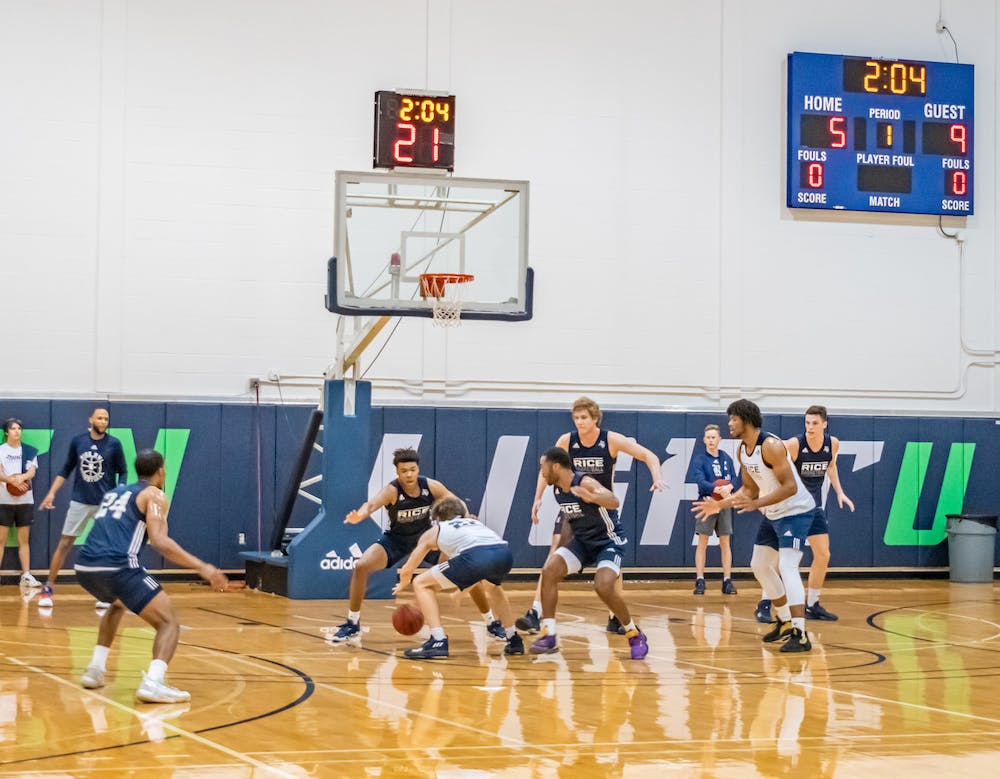 Following last year’s quarterfinal exit in the Conference USA tournament and their 15-13 record, men’s basketball head coach Scott Pera and his team hope to have a more successful season as they continue to build the program for the future. Pera will be entering his fifth season as the head coach of the Owls and had his first winning season leading the Owls last year.

This season, Pera will coach his most experienced team yet, as all five of his starters from last season have returned. In addition to the return of the experienced players, the Owls will also benefit from the addition of graduate transfers Carl Pierre, a guard from the University of Massachusetts, and Terrance McBride, also a guard who previously played at Cornell University. According to Pera, the Owls hope to use this experience and veteran presence to their advantage during tough situations.

“To look in the huddle this year and see all the juniors and seniors who have a lot of experience while adding guys that have experience, like Terrance [McBride] and Carl [Pierre],” Pera said. “It’s only going to help us. It will help us through adversity, through tough times against tough opponents. Experience matters.”

Last season, the Owls were led on offense by the scoring duo of sophomore shooting guards Quincy Olivari and Travis Evee. Olivari and Evee scored an average of 16.3 and 13.7 points per game, respectively, and the duo looks to continue leading this offense this season.

Olivari proved his offensive value with his conference-leading 88 three-pointers en route to being awarded third team all-conference. Similarly, Evee proved his offensive ability last season, winning the C-USA Newcomer of the Year award. Another key member of this team is sophomore forward Max Fiedler, who led the team in rebounds and assists.

According to Pera, the return of these starters has been important in increasing the overall chemistry of the squad and helping get both the freshmen and transfers integrated into the team.

“[The team] is going to look a lot different in terms of our continuity of having so many returning players and five returning starters,” Pera said. “So, those guys being familiar with each other and also the new guys that we’ve added, along with the freshmen, really gelling together. I’m excited about the group.”

The Owls will be in action from early November through mid-March. Facing off against programs such as the University of Texas, San Antonio and the University of Houston, the Owls will spend much of the first half of their season playing against non-conference opponents while also participating in invitational tournaments. The second half of their season will be dominated by conference play, which is scheduled to start on Jan. 1.

After going 6-10 against conference opponents last season, Pera is putting greater focus on this portion of the season. According to Pera, he hopes that his squad can have better performances in the latter part of the season, in those intra-conference games.

“Our goals [for the season] are the same as every year. We want to keep building the program [and] moving it forward, improving on last year,” Pera said.  “But, more importantly, improving during the season so that we’re playing our best basketball come February and March.”

One large benefit for the Owls is that for the first time in a year and a half, Tudor Fieldhouse will be without capacity restricitions for home basketball games. According to Pera, this exciting atmosphere at home is something that he is looking forward to this season.

“I’m looking forward to it being like a more normal season,” Pera said. “[I’m excited] to have fans in the stands, having our bench in a normal location, and just a general excitement for the group we have returning and getting the season started.”

The Owls’ season will open next Tuesday, Nov. 9 at 7 p.m. when the Owls face off against Pepperdine University at home.