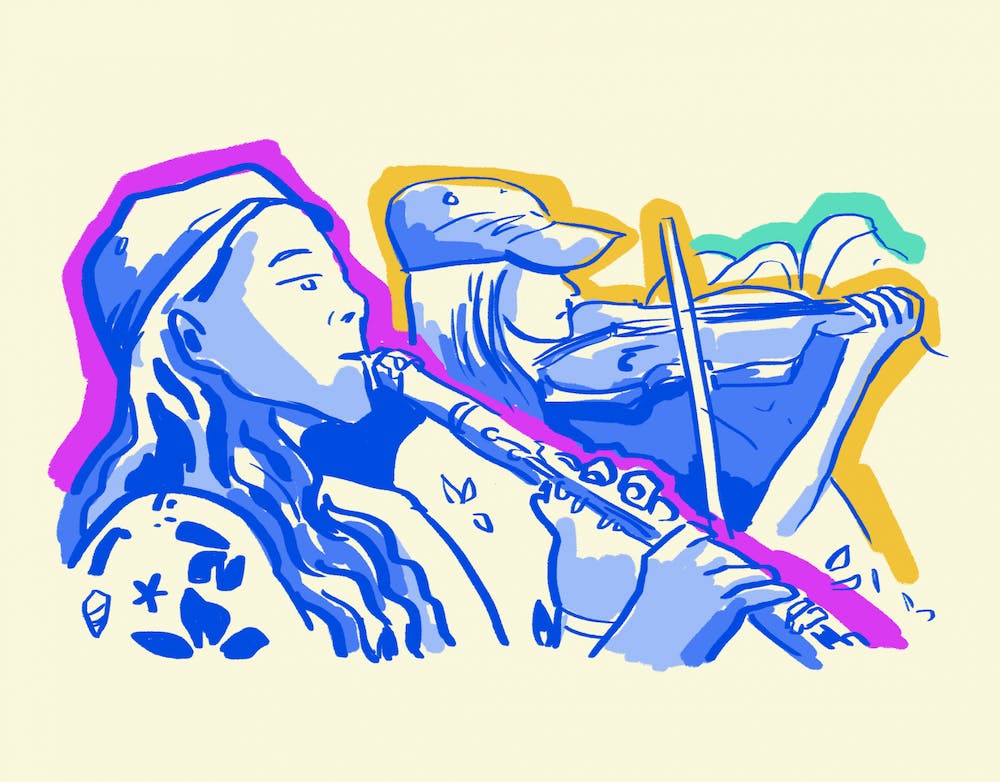 Last school year, in light of the COVID-19 pandemic, musical groups at Rice were forced to adapt. Adjustments included wearing special masks, using horn covers and rehearsing outdoors. As Rice rolls back COVID health measures this semester, musical groups have been able to practice and perform live music with fewer restrictions. The Thresher spoke with three students from different instrument ensembles to find out how playing music has changed.

The rollback of certain policies has allowed for a slow return to normalcy. Rachel Lee, a McMurtry College sophomore and a flutist in the Campanile Orchestra, said that the ensemble began to meet a few weeks after classes had started. Campanile Orchestra (MUSI 334) was not offered last school year due to concerns about COVID.

“We started Campanile halfway through the semester. I was happy when I got the message, in late September or early October, saying we’re going to have Campanile,” Lee said.

However, Claire Noel, a Brown College senior and a member of the Marching Owl Band, said that practices and performances don’t resemble their pre-pandemic forms. She said that the biggest pandemic change that remains is that the MOB still rehearses outdoors at Rice Stadium.

“We started our semester with a lot more policies, and throughout the semester as Rice relaxed their policies [and] as conditions in the Houston area have improved, we’ve relaxed those policies as well,” Noel said. “We don’t wear music masks or anything unless members choose to. We make it very clear to members that they are always welcome to wear a mask. They are always welcome to talk to the people around [them] and say, ‘Hey, would you be willing to wear a mask?’”

According to Charles Throckmorton, the Director of Bands, many of the other musical ensembles, such as the Rice Symphonic Band and the Houston Concert Band, still rehearse outdoors and follow public health precautions.

“Musicians wear masks and use bell covers to mediate the additional aerosol risk of these larger groups,” Throckmorton said. “[As] groups are considering moving indoors, it is important to consider both data from our CMT and health providers, but also the feelings of the musicians and their willingness to transition.”

Ryan Mbuashu-Ndip, a Hanszen College sophomore and a Rice Jazz Bands member, said that the bands are still taking precautions in order to ensure the health of the students.

“We’ve been indoors for the entire [school] year,” Mbuashu-Ndip said. “We’re [using] face masks and bell covers so we do have PPE.”

“[Music masks make you take] longer to get ready to play. It can slip in between your lips and the mouthpiece and affect how you play. Having bell covers also means that you can’t use any of the mutes that go inside the bells. The bell is blocked,” Msuashu-Ndip said.

Throckmorton said that specific precautions, such as the bell covers, have affected sound but the differences are not significant.

“The difference in sound has been detectable, but minimal in my opinion,” Throckmorton said. “Masks have affected rehearsal and performance pacing: we don’t move as quickly since the musicians have to navigate getting the instrument into their masks. Sometimes I still go too quickly and have to pause until they are ready.”

Throckmorton said the Jazz Bands’ performances this school year are slightly different compared to pre-pandemic times. He said that the ensembles’ performances are streamed as room capacities are limited.

“[The Jazz Bands] have done one performance with the room capacity strictly limited to 50, streaming to provide the music to other audience members who could not be in person,” Throckmorton said. “The Houston Concert Band has done a Facebook Live performance. RSB will use this and the Jazz Bands’ experience to have performances next semester.”

Lee said that while Campanile rehearsals are more or less back to normal — with the exception of masking for string players — performances by the orchestra have seen some slight changes in comparison to pre-pandemic times. The orchestra’s performances are not live streamed, according to Lee.

“You have to request tickets. They’ve capped the concert hall to 75% occupancy,” Lee said. “I think a lot of the signs [for the performances] say ‘masks required.’”

The experience of playing music has returned to normal, according to Lee. She said that more than anything, she’s happy she is able to partake in an activity that was a big part of her life prior to the pandemic.

“We’re all just very excited to be playing music together again,” Lee said.

Despite the restrictions in place, the MOB was able to continue rehearsing last year. However, practices looked very different compared to those during pre-pandemic times, according to Noel.

“For both semesters we had dual-delivery rehearsals two to three hours per week. We’d set up a Zoom; you could join no matter where you were. People at home could interact and play along with the band. The MOBsters joining over Zoom would have their sound muted, so while they could hear the in-person band, the in-person band unfortunately could not hear them while they were playing,” Noel said.

Noel said that adjustments went beyond simply offering an option for remote students. The MOB was also extremely committed to ensuring that experiences were safe for in-person members, according to Noel.

“We rehearsed outside. We’d be socially distanced. We’d do more than six feet [of spacing],” Noel said. “We’d have bell covers, [which are like] masks for the instruments, and special music masks. It’s a normal mask with a slit cut into it. You could play your instruments but your nose and mouth were covered.”

While the MOB had dual-delivery rehearsals, the Rice Jazz Bands didn’t hold in-person activities last school year and the ensemble was strictly virtual instead, according to Mbuashu-Ndip.

“We couldn’t actually rehearse online so we put together a video. We’d just go over stuff in the music [during Zoom meetings] and then go record it,” Mbuashu-Ndip said.

According to Mbuashu-Ndip, meetings focused on other aspects of performance since playing together online was not feasible.

“We’d split up by section,” said Mbuashu-Ndip. “We’d just look at the music and go through it. Just going over difficult sections, making changes.”

While COVID restrictions posed difficulties for the MOB, it did open up a lot of opportunities for the band, according to Noel. She said that since the MOB didn’t perform as much last year, it put on video shows, which allowed the band to incorporate new ideas into their performances. Members would write out the story line, record the music and then film the visual components.

“[COVID] did pave the opportunity for growth. It forced us to reevaluate things that we needed to reevaluate,” Noel said. “It did give us the push to think about who we want to be in this new age. COVID forced us around our traditional mold, which is a great thing.”