Lindsay Edmonds knows it’s all about the people 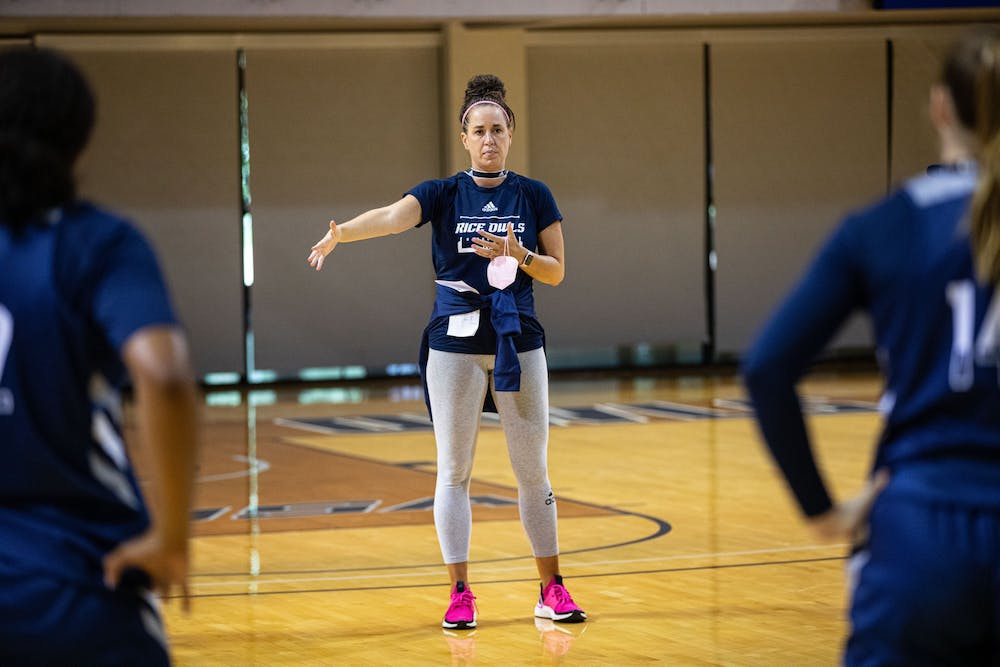 Long before she was offered the head coaching job at Rice, Lindsay Edmonds knew the one thing she would focus on if she ever got a chance to take over a program of her own.

“I learned from both [former James Madison University head coach] Kenny Brooks and [North Carolina State University head coach] Wes Moore how to do things the right way in your program and with the right people,” Edmonds said. “It was a non-negotiable for both of them so I know that’s how I want to run my program — [making] sure that I’m getting the right people here. It’s not just about basketball players, it’s about getting well-rounded [people].”

Ever since she was named the sixth head coach in Rice women’s basketball history in April, Edmonds has tried to do just that. But within just weeks of replacing Tina Langley, who left Rice to take the head coaching job at the University of Washington, her mission hit a roadblock. By May, four of the five starters from last year’s WNIT championship team had announced their decisions to transfer, including center Nancy Mulkey and forward Lauren Schwartz, the team’s top two scorers from a season ago, who followed Langley to Washington. According to Edmonds, the mass exodus caught her off guard.

“When I took this job, I thought the cupboard was very full,” Edmonds said. “I had initial conversations with all of them, except Nancy Mulkey, that went really well, and I didn’t anticipate them leaving. Once the first one went, it was a spiral of ‘oh she did it, now I’m gonna do it.’ I fought really hard to get them all to stay. I guess it wasn’t meant to be for me to have that roster. That’s not to say I didn’t take it extremely personally. But once they all [made] their decisions, the only thing I could do to navigate through it was to turn the page and move past it.”

Edmonds said she looked at the transfer portal, but ultimately decided to focus on recruiting, one of her favorite parts of the job, to make up for the departures.

“My former boss used to say you can’t win the Kentucky Derby with a mule,” Edmonds said. “You have to have some horses. I love recruiting, [especially the] developing relationships [part of it]. I’ve been recruiting coordinator at a lot of my stops, and I’ve been able to get some pretty good recruits. It’s not just about basketball players, it’s about getting well-rounded [people].”

Once the roster was set, Edmonds said that she began to focus on building a strong team culture.

“We spent the summer getting to know them, doing a lot of things together as a team,” Edmonds said. “We did a [team] Olympics day, we did some team building activities one day, we went out to dinner, we’ve done the Houston food bank together. We’re all about family, and we’re gonna do a lot of things together about promoting family, being family, establishing that off-the-court relationship so that when you are on the court, you’re ready to go to battle with your sisters.”

While she is starting to settle in as a head coach, Edmonds said that when she started her career, being a college coach wasn’t even on her radar.

“When I graduated from Appalachian State [University], I moved back home to Winston Salem and I was doing a sales job,” Edmonds said. “I called my head coach at App and asked her for a letter of recommendation to go back to grad school, because I just [wanted] to do something else. And she was like don’t do it. I [said], ‘why, you don’t think this is a good idea?’ And she said, ‘no, I want you to come back and coach for me.’ So I went back to App and started coaching, and here I am sixteen years later sitting as a head coach.”

After two years at Appalachian State, Edmonds was offered an assistant coaching job at James Madison, where she spent the next four seasons. In 2013, she left for NC State, where she rose through the ranks, becoming recruiting coordinator in 2018 and associate head coach in 2019. During her eight seasons there, the Wolfpack made five NCAA tournament appearances, and ended each of the past three seasons ranked in the top ten of the AP poll.

Edmonds is just a few months into what she hopes will be a long head coaching career, but while it’s been challenging so far, it’s lived up to her highest expectations.

“Everyone tells you when you slide those six inches over, everything’s gonna change, it’s gonna be a whirlwind,” Edmonds said. “But I don’t think you understand how big that whirlwind is until you’re truly in it and people are needing you constantly. It’s been fun and challenging, and all the things that I expected but at [an] even higher magnitude. I love the competitiveness of it, I love the relationships. I love impacting young ladies’ lives and being a role model and a mentor for them.”