Electric scooters on campus: Zooming to class instead of class on zoom 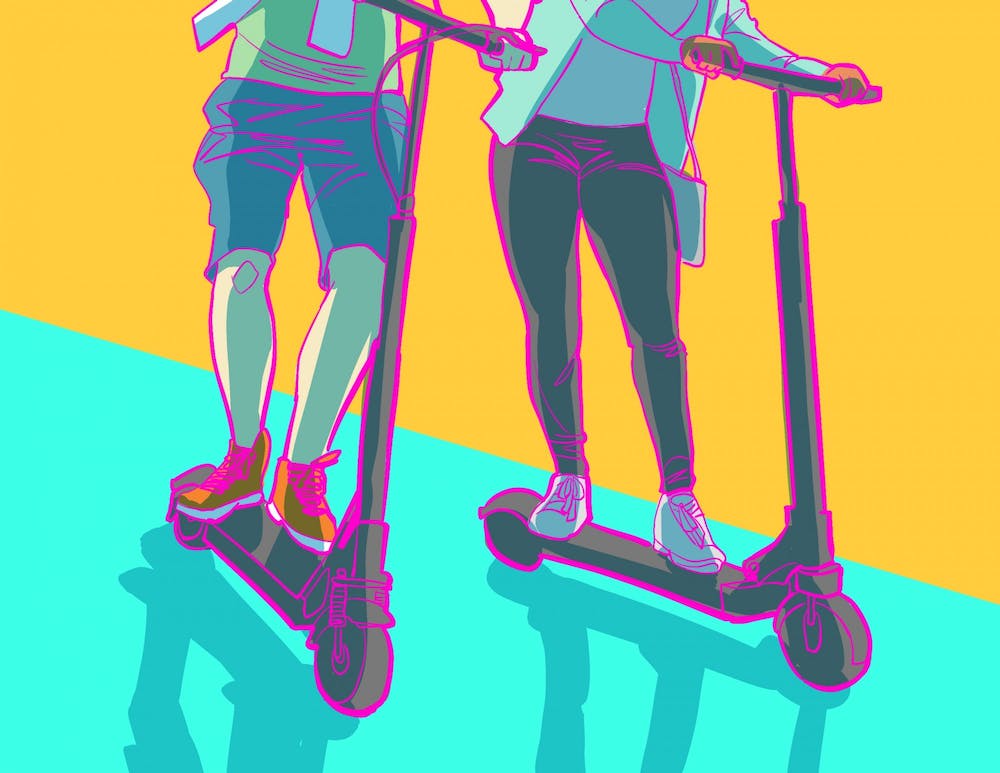 You’ve probably seen them charging in your college commons, parked in the back of your lecture hall, or zooming past you on the way to a 9 a.m. class. With top speeds of around 20 mph, electric scooters can shorten trips across campus by several minutes.

Elias Hansen, a sophomore at Martel College, said seeing a lot of students using them this year encouraged him to buy one for himself.

“I got my scooter at the start of this year,” Hansen said. “I have a class that [starts] 10 minutes after the end of my first one, and it’s pretty far across campus. I was going to be late every day if I didn’t have some means of getting there quickly.”

Devin Amodio, a senior at Jones College, said he received his scooter as a Christmas gift in 2019 and has used it ever since. Although Amodio was using his scooter to get around campus originally, he has found a new benefit in it in his senior year.

“I live way off campus, and I don’t want to pay a whole bunch of money for parking each semester,” Amodio said. “I park [my car] at the zoo, and then scoot down Main Street to come to class.”

Will Rice freshman, Alice Sun, said she noticed that a lot of student-athletes at Will Rice and other residential colleges use electric scooters.

“Whenever I see an e-scooter, I typically think of an athlete,” Sun said. “Normally the people riding them are always athletes or the people who are associated with athletics.”

Freshman Aaron Smigelski, a baseball player from Sid Richardson, said he feels that most athletes on campus use scooters because of their efficiency.

“It’s just more efficient,” Smigelski said. “It saves us time because we’re already restricted on the amount of time that we have for studying and [other activities].”

Although quick, fun and often necessary, the high speeds of e-scooters may also bring about safety concerns. Amodio said he has fallen while scootering several times.

“I was going down Sunset, flying down Sunset, and I hit a pothole,” Amodio said. “I was going full speed but I didn’t land too badly. [I had] just a couple of cuts and busted the fender. I’ve had a couple slip offs here and there, usually when things are wet, but nothing too serious.”

Safety is also a concern for the students who don’t ride scooters. Basma Bedawi, a freshman at Hanszen, said she often feels unsafe when e-scooters pass by.

“You hear a quick ‘on your left’ but at this point they’re already on your left and they whiz by,” Bedawi said. “Once, this guy went by so fast that the wind blew my hair. It was very close, and I was like, ‘Oh my God’ … I think a lot of people have had the same experience … I’ve talked to a lot of people and I swear it’s happened to half of the campus.”

While there haven’t been many reported accidents this year, Lieutenant Thomas Hudak said that the Rice University Police Department fears that safety may become a problem on campus and that e-scooter users are expected to follow the same rules as bikers.

“We are concerned because we encourage all students, just like on bicycles or skateboards, to obey the rules of the road,” Hudak said. “That is, to go with the flow of traffic, to stop at stop signs, to yield the right of way to pedestrians and other vehicles who have the right of way, to alert people audibly that you’re going to pass someone [and] also to respect when the buses are stopping to discharge students or to pick up students [and] not to be passing [then].”

Hudak said that RUPD has not handled major accidents so far but has given nine verbal citations to scooter riders.

In addition to safety, the department is monitoring scooter theft. Although there has been only one reported theft since the beginning of this year, the department is trying to find better ways for students to store scooters in between classes, according to Hudak.

“We are working on a mobility safety committee and on how scooters can be kept, possibly in buildings, while the students are in classes,” Hudak said.

The best way to prevent theft, however, is registering scooters with RUPD, according to Hudak. While registration is not mandatory, Hudak said that identifying information makes the search for missing scooters easier. According to RUPD, only 14 students have registered their scooters this year.

“Registering helps us identify who the owner is,” Hudak said. “If the scooter is unfortunately taken or stolen, it increases our ability to find it and bring it back to the owner significantly because we can go online and check pawn shops with that registration number.”