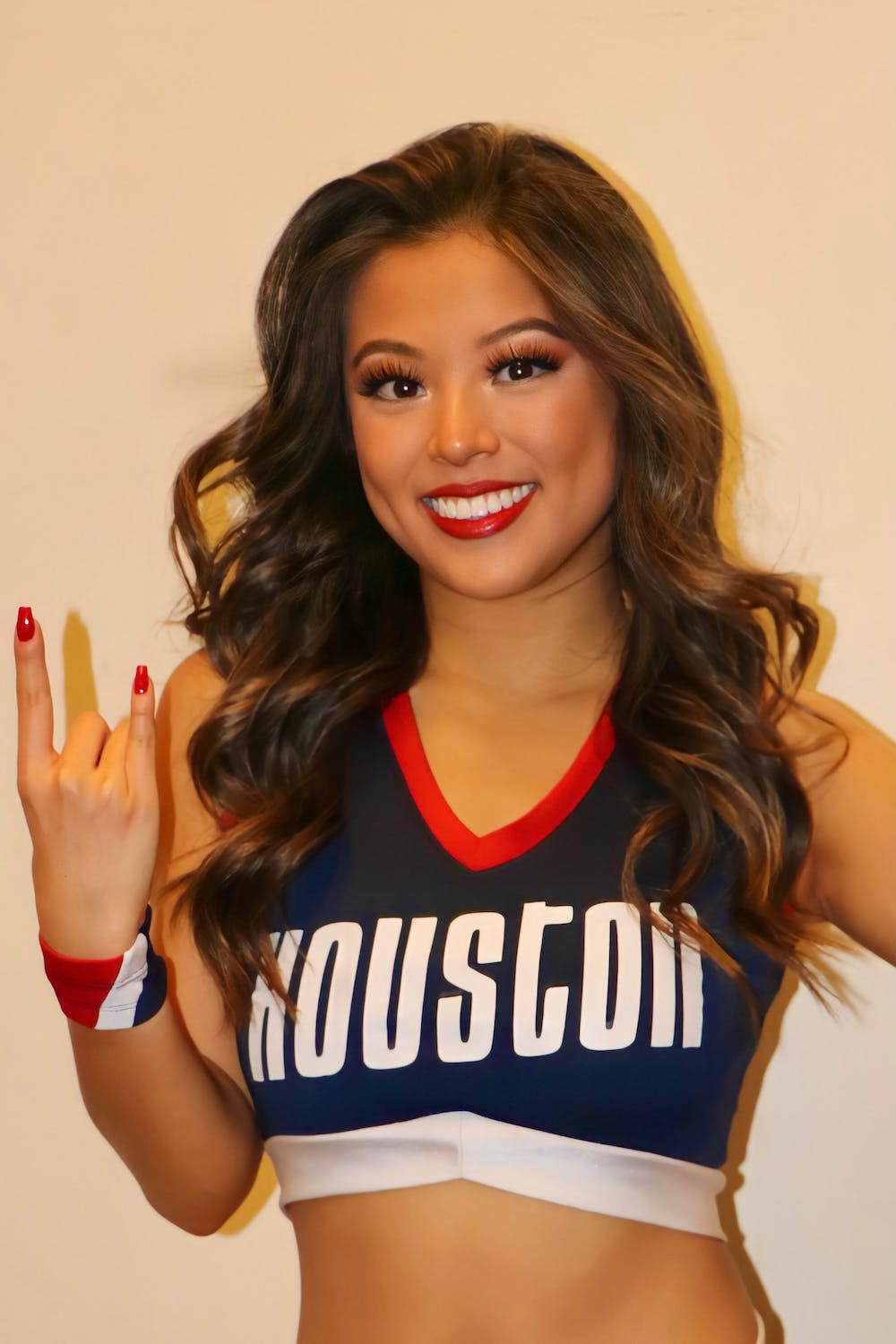 Chris Boswell, kicker for the Pittsburgh Steelers; Erica Ogwumike, basketball player for the Nigerian national team; Nicole Mericle, professional Spartan Racer — all these athletes have put blood, sweat and tears into their sport to make it to the professional level. Now you can add Sydney, a sophomore at Sid Richardson College and new member of the Houston Rockets Clutch City Dancers, to the list.

Sydney, a Houston native, said she has been a fan of the Rockets and the Clutch City Dancers since she was younger. Now, in the position of individuals whom she once looked up to, Sydney said that she is grateful for the amazing opportunity to be a part of the organization.

“It’s a once in a lifetime opportunity,” Sydney said. “I will forever be able to say that I was a Clutch City Dancer. I grew up watching the Rockets my whole childhood and so I’m a big fan, and as a dancer, [I’m] a fan of their dance team.”

When Sydney was seven years old, she started her dancing career in traditional partner style ballroom dancing at the small, local Barbara King Dance Company. A multiple-time national finalist, Sydney trained and competed in ballroom dancing all over the country, representing her company in national meets hosted by professional dancers. She said earning a national finalist title the summer before her freshman year of high school is one of the highlights of her career.

“Being a national finalist was amazing because that is ‘the’ nationals that everybody goes to,”  Sydney said. “[I] beat a really big competitor of mine who was super talented.”

When Sydney came to Rice, she immediately tried out for the Rice Owls Dance Team. Sydney said she is grateful for the opportunity to support her school and its sports teams through dance.

“Being able to dance with the school spirit vibe is a really big deal because that is something that I’ve wanted to do and didn’t have before being a part of the Rice dance team,” Sydney said. “Being able to represent an organization that is bigger than me is something I’ve been able to take with me.”

In the summer after Sydney’s freshman year of college, the Clutch City Dancers hosted a dance class open to the public. While Sydney had no intention of becoming a professional dancer, she attended the class for fun, she said.

“I found out about the class from a friend via Instagram and I decided to go and see what it was like,” Sydney said. “One of the coaches approached me and said I should audition. I initially said no, but when a coach pulls you aside and tells you to audition, you can’t say no.”

The audition was scheduled just two weeks after the dance class — a tight turnaround. According to Sydney, most people who audition for professional dance teams spend all year, if not multiple years, preparing.

“Most contestants had their uniforms custom-made and routines planned out, and I didn’t have any of that,” Sydney said. “So I buckled down for the next two weeks to get ready.”

The auditions were a two-week process of four initial rounds, a round of interviews and two final rounds, with cuts made after each round. Each round was scrutinized by judges and filmed for official social media accounts. The auditions started with 100 of the top dancers in the Houston area, who had to quickly learn jazz or drill choreography and show off their training and style in improvised dances — all while displaying professionalism. Sydney said she was worried that her ballroom style was too different from the other styles at the audition, but this was not the case.

“I showed up with the most boring audition outfit possible and I had a ballroom improv, because that is where most of my training is,” Sydney said. “Everyone else was doing their flips, leaps, jumps, turns and tricks. Improv was difficult because in ballroom you never have to dance on the fly, so it’s way outside my comfort zone.”

Despite the rushed audition preparation and her atypical dance style, Sydney was selected as one of the 14 members of the Clutch City Dancers. Sydney said she was very surprised as she did not expect to become a professional dancer.

“When I first found out I made the team, I was in shock,” Sydney said. “Many of the other girls who made the team had tried out for the past three or four years and had much more experience than I have. I auditioned with no expectations of actually making the team, but more for the experience.”

According to Sydney, she is the youngest on the team; many of her teammates are working full time jobs, getting married and even raising families. Sydney said she is learning a lot from the older and more experienced women, regardless of the age gap.

“One of the dancers is a teacher who just got engaged,” Sydney said. “There are two women … in real estate and others in corporate [careers]. So when they are talking about their jobs and their houses, I’m telling them about my sports sales midterm.”

Sydney said that she enjoys dancing for the Rockets. Since tryouts, the team has been preparing for preseason and the 41 home regular season games where they will perform. According to Sydney, the team had to learn the first dozen of the season’s routines in an intense weekend of training camp. Despite the hard workouts and the grueling practice schedule, Sydney said she embraced every minute of it.

“The opportunity reminds me a lot of why I love to dance and how important it is that I keep a form of dancing in my life,” Sydney said. “Professional dancing is a lot harder than it looks, even to me. After I leave practice, I’m exhausted and drenched in sweat because we work out with no AC but feeling extremely motivated and inspired.”

Sydney said dancing for the Clutch City Dancers requires a lot of thinking on her feet and adaptability in order to represent her team and city well.

“There are a lot of new dances and styles to learn but there are also a lot of off-court events like media appearances and meet and greets that I have to prepare for,” Sydney said. “Anywhere I go, we're representing the Rockets and the city of Houston, so it’s a lot of pressure.”

Sydney said that she is also excited to be a part of the professional sports industry and the networking opportunities that come with it. From her first days at Rice, Sydney has been involved with numerous aspects of Rice athletics on the baseball and football teams including marketing, recruiting, media and entertainment.

“At Rice, I’ve seen how many puzzle pieces have to come together every day to make a singular basketball or any sports game come together,” Sydney said. “Being on the pro level is putting all of that on steroids. As a sports management and business major, it’s a great networking opportunity to get my foot in the door to these professional sports organizations.”

With the NBA season right around the corner, the Rockets face the Oklahoma City Thunder this Friday, Oct. 22, at the Toyota Center. Although she has a couple of pre-season performances under her belt, Sydney said she has mixed emotions about her first-ever regular season performance in what will be the largest crowd she has ever performed for — with 12,000 to 18,000 fans in attendance.

“I’m really excited but also nervous,” Sydney said. “Opening night is a full-blown production and I want to dance as well as possible and represent the organization as best as I can.”

As a full-time student at Rice, Sydney has to balance this professional opportunity with college academics. She said this is a challenge she is ready for.

Sydney said that she is very grateful for the privilege to dance for the Rockets, even though she is still processing the reality of being a professional dancer.

“Once Opening Night comes, I’ll have a better sense of it — but when we're warming up, Jalen Green is warming up next to us, which is crazy,” Sydney said.

While Sydney is unsure about her future in dance, she is very excited for what’s in store right now, she said.

“There [are] a lot of unknowns and definitely a big learning curve but I’m excited to learn a lot from this opportunity,” Sydney said.

[10/28/2021 11:28 a.m.] This article has been updated to reflect that the dance team of the Houston Rockets is the Clutch City Dancers, not the Clutch City Dance Team, and that Sydney was a national finalist in ballroom dancing the summer before her freshman year of high school.