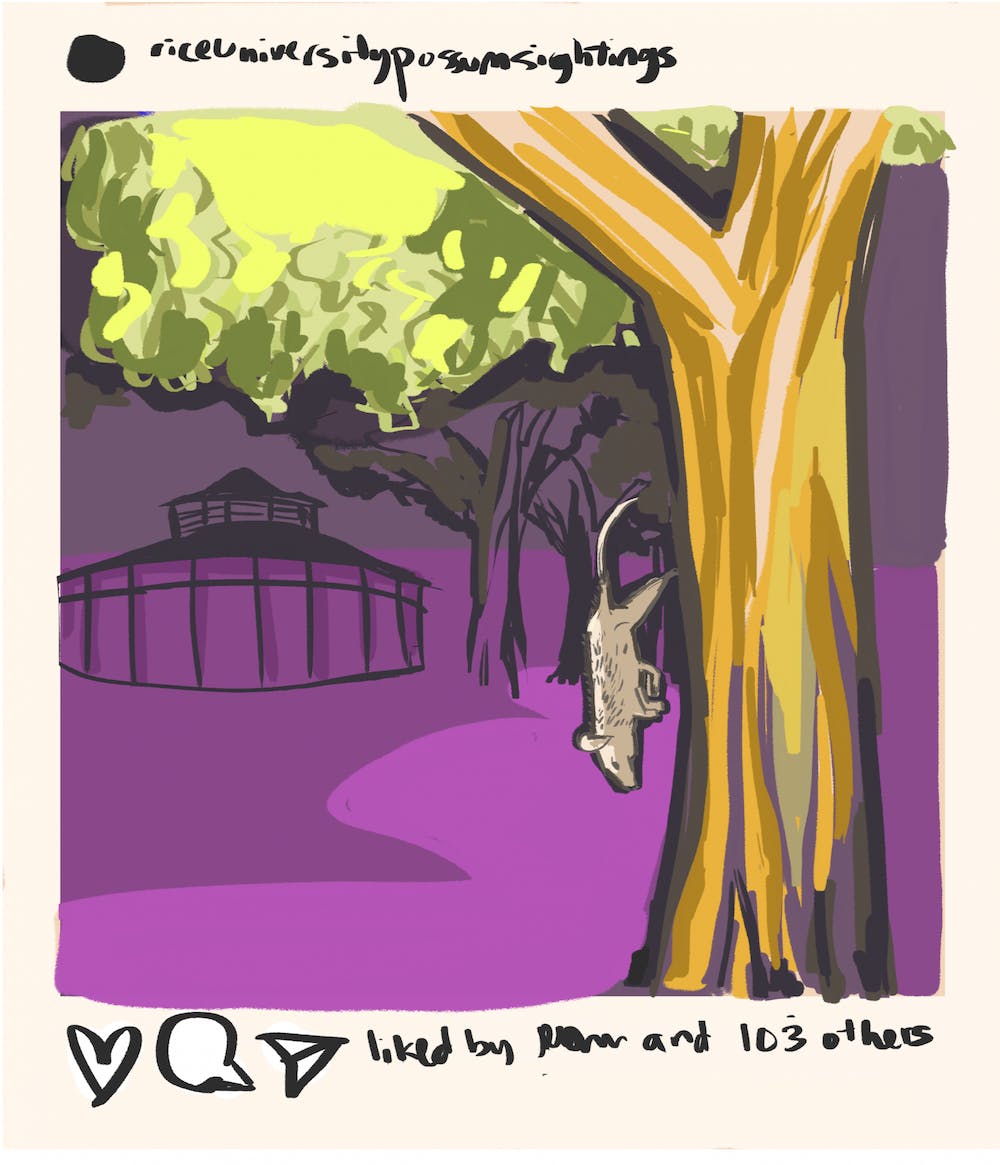 The curated and public “rinsta” — a portmanteau of “real” and “Insta” — is maybe the most popular unofficial category of Instagram accounts. But a new type of rinsta has been brewing: Rice-related Instagram accounts. Focused on subjects from possums to bricks, these accounts show an oddly specific aspect of life on campus. The Thresher talked to the owners of three of these accounts.

Elizabeth Fessler said she was inspired to start @rice.bricks when she noticed that the bricks of the Moody Center for the Arts didn’t fit in with the rest of the campus’s aesthetic.

“It’s a gray modern building, but it’s still brick, and I thought that [it] was an interesting attempt to keep all the architecture cohesive on campus,” Fessler, a Jones College sophomore, said. “I thought it would be interesting to look at how many different types of bricks there [were, because] then I started noticing that every single brick building actually wasn’t [made of] the exact same kind of brick.”

Fessler said that once she started to pay close attention, she found the beauty in the varieties of bricks among the buildings at Rice. Fascinated by the fact that hardly any two buildings have the same type of brick, Fessler went around the campus and took pictures of buildings with different bricks and patterns, she said.

To maintain the account’s aesthetic, she makes sure that the pictures she posts are nine to ten bricks tall. She said that Katherine Chui, a sophmore from Jones, helps her maintain the appealing look by editing the pictures in a consistent format.

“Initially I was taking pictures on my camera and posting them immediately, but I knew I wanted to edit them because the bricks sometimes aren’t exactly straight,” Fessler said. “Now [the account] looks a lot more professional and clean, and I think that’s quite appealing to people.”

According to Fessler, she has had interactions related to the account with other students in person and online, where comments voice strong opinions about the bricks of residential colleges. Fessler said she has also gotten submissions from graduate students, which she did not expect.

“I have told some people that I run the account, and now sometimes I will be walking around and someone says, ‘Hey, Rice bricks’ to me in passing, which is pretty funny,” Fessler said.

@rice.bricks has also been noticed by a famous Instagram brick account. According to Fessler, @brickofchicago gave her account a shout-out, and she gained many brick fans as followers.

“[They] came to Houston and took pictures of a lot of bricks here because they are a brick Instagram account, which is a genre I didn’t know about,” said Fessler. “Now I have a mutual relationship with this other brick account that has [almost 18] thousand followers.”

Fessler said that she uses a spreadsheet to keep track of the buildings she has featured.

“I post once a week now, and I still have a lot of buildings left, which makes me optimistic for the future of the account,” Fessler said.

Fessler said that her hiatuses during long breaks can help the limited supply of content last longer. But given the limited number of bricks on campus, she said she is not sure what the future holds for her account.

“I am not sure how many bricks will be left by then. I haven’t thought about continuing the legacy. It seems far away,” Fessler said. “I do think once I run out of my normal posts, there are a lot of small details like mosaics on brick designs on buildings that aren't necessarily a perfect square of ten bricks, so once I am out of things, I will start getting into that territory.”

Sarah Preston first created her account @riceuniversitypossumsightings after taking photos of a possum she encountered on her way back to her college from Fondren in September 2020. She now runs the account with Baker College sophomore Andrew Miller.

“I was walking back late one night and I [saw] what I think is like a snake hanging over a trash can,” Preston said. “So I could just see the tail and it was kind of scaly, and I turn on my phone flashlight and look, and it’s just a possum.”

According to Preston, Miller sent a bunch of possum facts and pictures to the account and she asked him if he would like to be the co-admin. These days, the two usually post submissions, rather than their own photos, on the page. Preston said she did not expect a lot of people to see the account — let alone send in so many pictures of possums spotted around campus — the way they have.

“People just send [pictures] in. On rare occasions, I will see a possum myself and I’m like, “Oh my god, no way. I can’t believe I actually just saw one myself,’” Preston said.

Preston said that the account’s engagement is growing because people regularly send in pictures.

According to Preston, the content of the account has been educational as well as entertaining. A few weeks ago, Preston posted a submitted video of a possum walking in tight circles.

“Somebody sent [the video] in and I posted it and people were like hang on. Somebody mentioned that the little dude was sick. I’ve learned that possums can get sick if they eat too much human food, so probably just don’t feed the possums,” Preston said.

Kelton Keck started @ricechairs during the first few days of Orientation Week. Keck said that he would take pictures of random chairs he noticed at Rice because he is interested in photography.

“The first night I toured campus, there was just a random chair sitting in the middle of the ground and I took a picture of it … Not less than 20 minutes later, there were just more random chairs sitting everywhere,” Keck, a freshman from Sid Richardson College, said. “I have noticed an abnormally high level of misplaced chairs at Rice so I thought, ‘Why not take pictures of them and post them all in one place.’”

Keck said that he decided to create an account dedicated to chairs because he thought it would similarly pique people’s curiosity.

“I feel like a chair is something that has a very distinct purpose and location,” Keck said. “If there is a chair sitting somewhere, you are gonna be like, ‘Why is there a chair there?’‘Did someone bring the chair there? If someone brought it there, why was there no table? Why has no one moved the chair back?’ And it makes you wonder.”

Keck said that people would submit photos of chairs they have found in random places. He said he finds that amusing because it means that people have not only noticed the random chairs but also thought about his account when they did so.

Keck said that although the account was growing initially, he doesn’t see much future in it now.

“It’s because there’s only so many people interested in following pictures of chairs and not a lot of people relate to chairs,” Keck said. “There [are also] only so many chairs that are sitting around campus.”