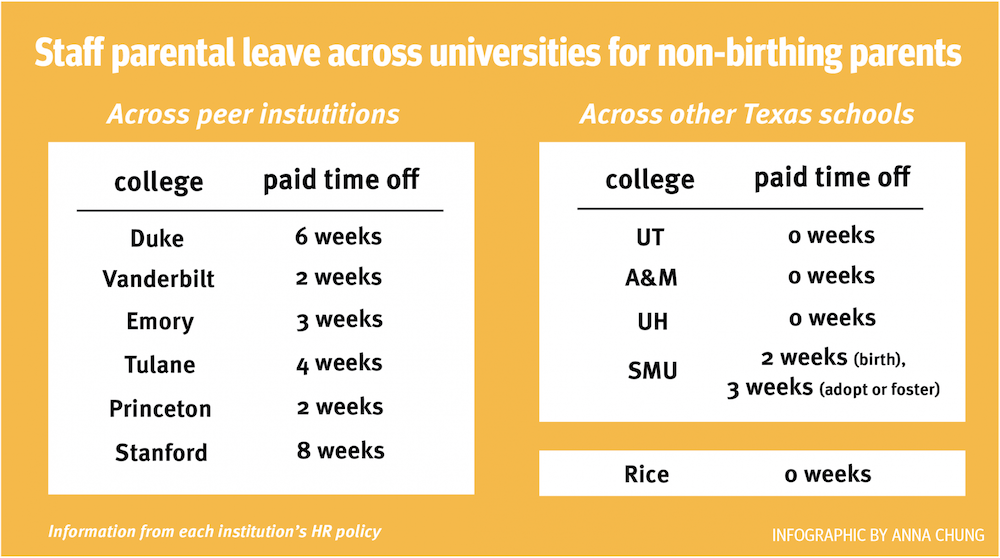 Rice currently offers no paid family leave for staff members who are the non-birthing parent. Partners, adoptive parents or foster parents can take unpaid leave up to 12 weeks in a one year period, in compliance with the nation’s Family Medical Leave Act, according to Rice Policy 417.

Rice staff members who are the birthing parents can receive five to seven weeks at 80 percent pay coinciding with their own FMLA leave, under the Short Term Disability Act, according to Rice Policy 423. The length of the paid leave period depends on the type of delivery.

Steve Sherman, a research fellow at the Kinder Institute, said he had to use his accrued vacation days in order to have paid time off following the birth of his daughter in late September. Sherman said his wife was largely bedridden for the first 10 days after giving birth via C-section.

“She was essentially prostrate and nursing while I had to take care of food, of the dog, of just arranging the house, getting things together,” Sherman said. “Let’s say I didn’t have vacation time, there’s two things that would have happened. One is that we would have taken a humongous financial hit. Or two, I just would have gone back to work and she would have nothing, she would have no one.”

Bryn Dugre, staff co-chair of Faculty Senate Faculty and Staff Benefits Committee, said she has long been interested in the topic of parental leave, even before having her two children while an employee at Rice.

“A newborn is a lot of work and you’re exhausted and you need help,” Dugre, operations administrator of the Earth, environmental and planetary sciences department, said. “The person who didn’t [give birth to] the baby, if they can have leave at the same time, it’s very helpful.”

Many of Rice’s peer institutions have university-specific parental leave policies concurrent with FMLA. Duke University offers its staff six consecutive weeks at full pay for any biological parent or adoptive parents with newly placed children, according to their HR policy 09.17. Staff at Vanderbilt University and Emory University can likewise receive two and three week leaves with full pay, respectively, upon becoming new parents, according to each school’s HR policies.

Within Texas, though, Rice is largely in line with other universities, including University of Texas, Austin, University of Houston and Texas A&M, all of which do not offer paid parental leave for their non-birthing parent employees.

Sherman said he was surprised to find that Rice’s policies were normal for Texas institutions.

“This is a Rice issue, but it’s also a bigger-than-Rice issue,” Sherman said. “All throughout the state, it shows that there’s really a lack of support for mothers.”

Dugre said as well that the issue of lacking parental leaves is not unique to Rice.

Dugre said she raised the issue of parental leaves in a committee meeting last spring, including the disparity between what is offered by the university to staff versus faculty.

“I think a lot of staff recognize that there’s a big difference between what staff are given and what faculty are given,” Dugre said. “And I think that it’s hard not to see the big difference there.”

According to Rice policy 204, tenure-track faculty who give birth, adopt a child under one year or are a spouse of the birthing parent qualify for a one semester leave at full pay under Rice’s Primary Caregiver Leave. Non-tenure track faculty are not eligible for this benefit.