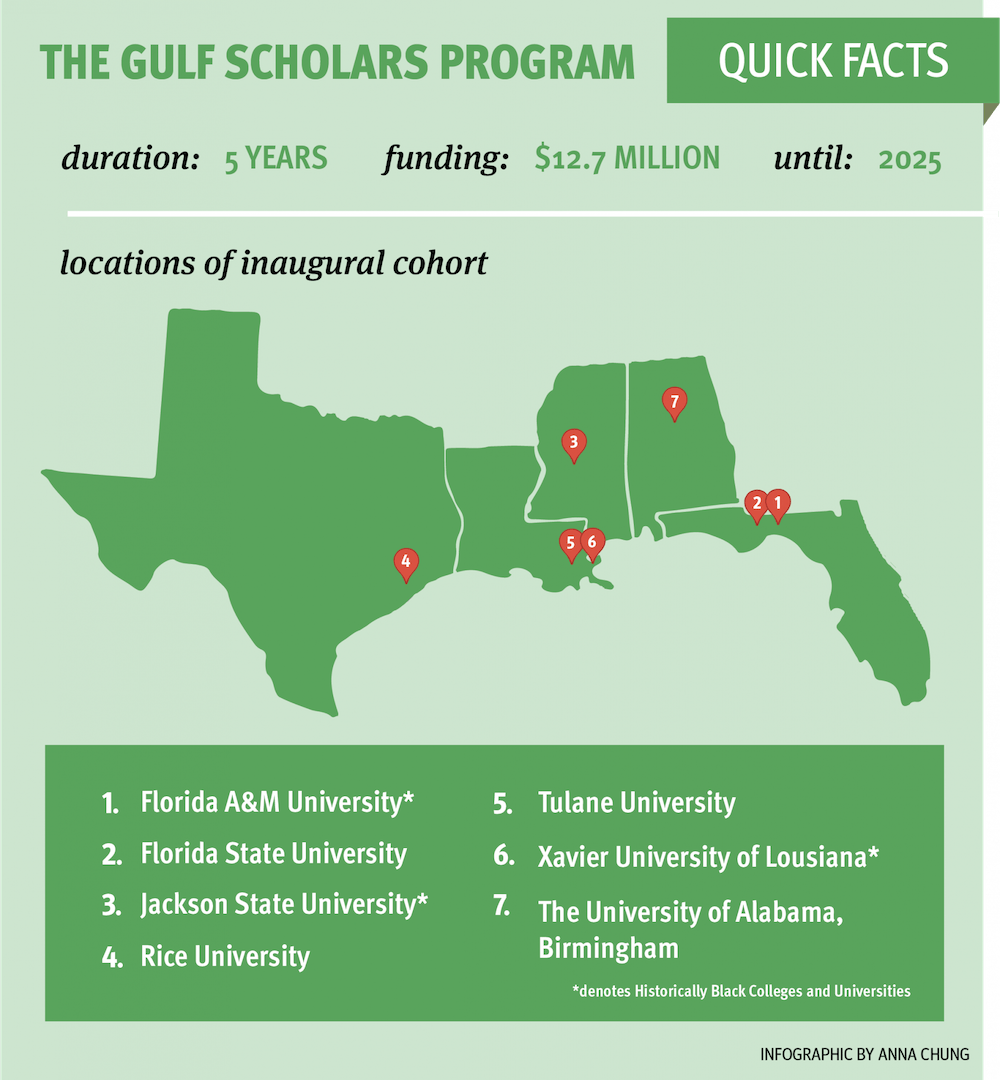 “The combination of curricular and co-curricular activities focused squarely on Gulf Coast challenges related to climate and hazard resilience is one-of-a-kind,” Padgett, a civil and environmental engineering professor, said.

GSP@Rice will be run as a collaboration between the School of Engineering and the Center for Civic Leadership, according to GSP@Rice’s website. Currently, the program is only open to sophomores, but it will expand each year to include a new class of students, according to an Oct. 5 newsletter from Provost Reginald DesRoches.

Renata Ramos, an associate dean of the School of Engineering, served on the board that designed GSP@Rice. She said that a key component of the program is to train students to be environmental leaders in the region.

“This is a multiyear program designed to inspire and prepare undergraduate students to address the challenges of resilience to natural hazards and climate stressors facing communities in the Gulf Coast region,” Ramos said.

Ramos said that the process to select universities to join GSP took into consideration geographic diversity and the diversity of the student population in order to represent the wide range of communities in the region.

“We are so excited that Rice was selected to contribute to the development of a diverse generation of leaders,” Ramos said.

The diverse voices and experiences of students from each participating university are an asset to the program as a whole, Padgett said. GSP plans to expand to more schools each year with a focus on minority-serving institutions, reaching 25 universities and over 150 undergraduates by 2025.

Padgett said each university has their own unique GSP program, tailored to their strengths, interests and location.

“Rice University and our GSP participants will benefit from belonging to this broader network of scholars to both contribute to the conversation and learn from others’ experiences,” Padgett said.

Sophomores across all majors and transfer students with sophomore standing are eligible to apply by Nov. 1. Each university in the program will choose eight students representing a diverse range of academic backgrounds. Interested students should attend an information session on Oct. 13 or look at GSP@Rice’s website, Padgett said.

“I would encourage those who are passionate about contributing to a safer, more resilient and sustainable Gulf Region to check it out,” Padgett said.

Tomas Russo, president and co-founder of the Clean Texas Seas club, said that he hopes the program’s research will address specific ecological issues in the Gulf like wetland loss. Russo said wetland loss is a massive problem for the Gulf that shows no signs of slowing down, and one of the areas of research he wants Rice to focus on is wetland conservation and restoration to preserve these ecological hotspots.

Disclaimer: Tomas Russo is a senior writer for the Thresher Features section.

“In addition, the Gulf of Mexico is plagued by nutrient, oil and plastic pollution that have wreaked havoc upon aquatic life,” Russo said. “I want Rice to focus research on ways to effectively combat human-caused pollution throughout the Gulf.”

Russo said one of the club’s priorities is to raise awareness about pollution throughout the Gulf, and they organize beach cleanups along the Texas coast to directly engage volunteers with one portion of the problems facing the Gulf.

Gargi Samarth, an advocacy officer for the Rice Environmental Society, said that recent disasters like Hurricane Harvey highlight the importance of studying and developing environmental solutions for the Gulf Coast region. As a Houston-area native, they said the hurricane was particularly devastating.

“People lost their houses,” Samarth, a Brown College junior, said. “There was so much flooding and food insecurity as a result of it.”

Samarth said the storm was part of a pattern of frequent and intense hurricanes that are becoming more common with climate change. It demonstrated the importance of looking at climate change in a way that responds to the community, they said.

“We have an obligation to make sure that the research that we do and the activities that we do are considerate of the needs of this area,” Samarth said.

According to the GSP@Rice homepage, the program’s vision is to develop the next generation of diverse coastal resilience change agents ready to address challenges of urban resilience and climate adaptation in the Gulf Coast region.

Samarth said the focus on undergraduate students is an important part of GSP@Rice because of the long-term impacts of climate change. They said they hope that introducing this program to Rice creates an opportunity for students to learn about and focus on the local climate even after their time at Rice.

“Climate change is obviously an issue that affects everyone, but it’s especially important to get the younger generation as engaged in it as possible, because this is something that’s going to be impacting us throughout our lifetime,” Samarth said. “We want to make sure that the research that we’re doing involves students and student perspectives so that it’s something they can learn from and build on in their future careers.”