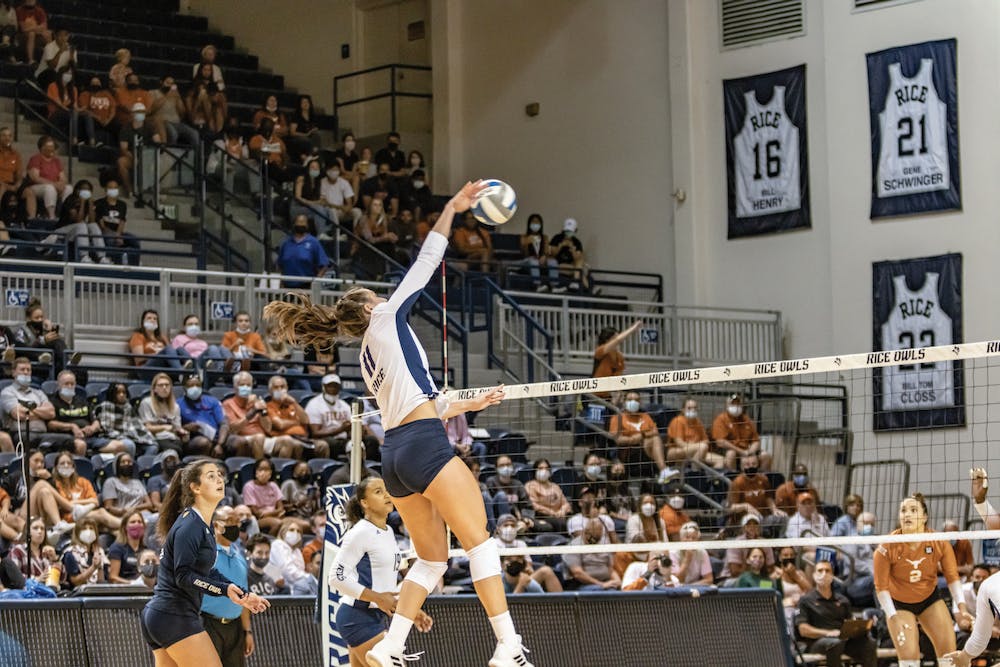 “I love Rice volleyball, and playing with this team has been the best four and a half years of my life,” Lennon said. “[Breaking] the all-time kills record makes me feel like I really made an impact in my time here in helping my team find success.”

As for the team as a whole, the Owls swept the Lady Techsters on Friday, before beating them 3-1 on Saturday to extend the team’s winning streak to six and improve their record to 11-5.

The defense also went to work: junior defensive specialist and libero Elizabeth LaBue had 13 digs, junior setter Carly Graham pitched in 15 digs (along with 39 assists, making her performance this game her eighth double-double of the season), and Lennon contributed 12 digs to mark her eighth double-double of the year. According to head coach Genny Volpe, Graham and Adekunle elevated the team’s play on the day.

“Overall I thought Carly did a great job running a balanced offense today,” Volpe said. “It’s what we have been working on. Anota really shined today in transition the whole match.”

Rice won the first set 25-16, holding Louisiana Tech to a 0.081 hitting percentage and benefiting from strong offensive outings from Adekunle, Bichelmeyer, and Graham. The second set proved to be more difficult, as Rice went from being down 10-9 to winning 25-18. The third set saw a lot of back and forth, with Tech and Rice tied 18-18 late in the game before the Owls went on a 7-2 run and won the match 25-20. Rice’s victory in the set was thanks in large part due to efforts from Lennon (seven kills), Adekunle (four kills), and Graham (15 assists).

While Volpe had high praise for the offense, she said she was less impressed with their defensive output.

“We want to be better defensively, and it starts at the net.” Volpe said.

The team carried their momentum over into their four-set victory the next day. In addition to breaking the kills record, Lennon had a strong showing all match long, as she smashed home a match-high 20 kills on an impressive 0.571 hitting percentage. She also recorded nine digs and three blocks, ending the game with a total of 23.0 points. According to Volpe, Lennon was the star of the night for Rice.

“The highlight was definitely seeing Nicole make history and breaking the all-time kill record,” Volpe said. “Nicole has helped elevate Rice volleyball to new heights and I couldn’t be more proud of her. She is the entire package. I can’t wait to see how she caps off her stellar career here at Rice as we hope to continue to make history as a team.”

Rice’s offense was not a one-woman show, however, and featured strong outings from Adekunle, Shore, and freshman outside hitter Sahara Maruska, who pitched in 12 kills, nine kills, and eight kills, respectively. Graham recorded her ninth double-double of the season and stuffed the stat sheet with 52 assists and 15 digs, along with four kills.

Rice won the first set in convincing fashion 25-11, propelled before picking up the second set 25-16 while holding Tech to a 0.064 hitting percentage and eight kills. The third set was a hard-fought loss for the Owls, as they battled Tech to a 21-21 tie but dropped the final four points. Rice bounced back with a vengeance to take the fourth set 25-15, behind six kills from Lennon and five from Adekunle. Aside from the disappointing third set, Volpe said that she thought the team played well throughout.

“I was very pleased with how we started the match and how we finished,” Volpe said. “But we allowed them to score at a high rate in set three which ended up hurting us there.”

Now 6-0 in conference play, the Owls sit atop the Conference USA West division halfway through their conference season. The Owls will look to continue their C-USA unbeaten run with a two game series against the University of Southern Mississippi, Oct. 22-23 at Tudor Fieldhouse.