The Bayou Bucket: The story behind the “ugliest trophy in sports” 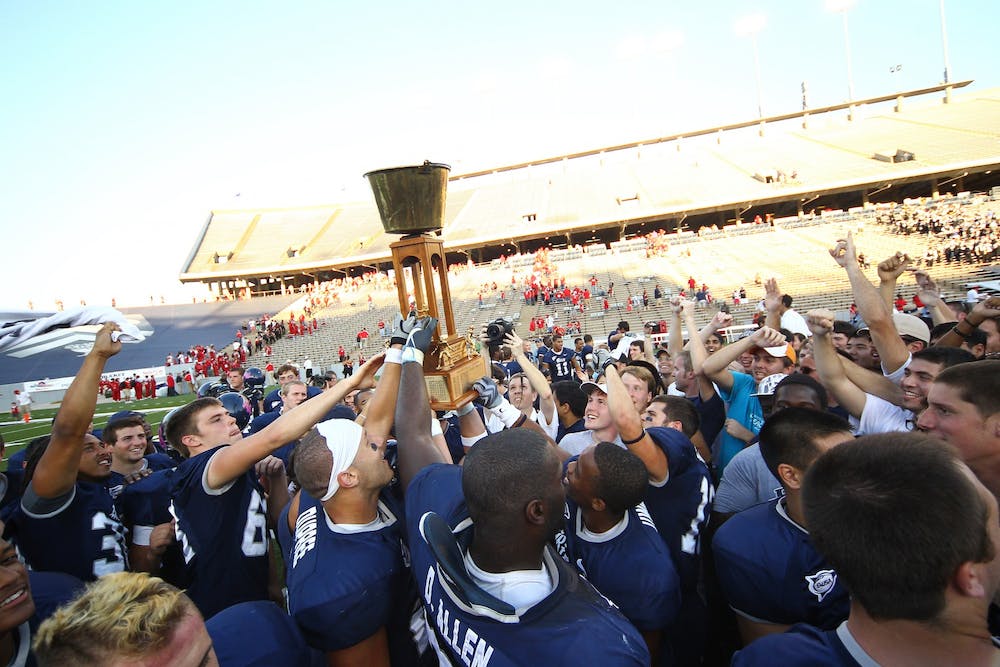 David Bailiff cherished the two times that he won the Bayou Bucket during his tenure as the Rice head football coach from 2007-2017. But that doesn’t mean he has any misconceptions when it comes to the trophy’s appearance.

“The trophy is as ugly as can be,” Bailiff said. “But it’s so valuable when you win it.”

When the Rice football team hosts the University of Houston this Saturday, the two teams compete for the right to lift the Bucket, a 47-year-old dented piece of metal mounted on a trophy that has been awarded to the winner of every Rice-UH football game since 1974. The trophy is overseen by the Touchdown Club of Houston, a local organization dedicated to football-related causes in the city. According to Neal Farmer, executive director of the Touchdown Club, the trophy began as an idea in 1974.

“For years, the Touchdown Club had a luncheon [for the University of] Texas, [Austin]-Texas A&M [University game],” Farmer said. “In 1974, some of the guys [at] the Touchdown Club said ‘well if we do something for Texas-Texas A&M, we need to do something for Rice-Houston.’ So they got [together] with the two coaches, [Al] Conover and [Bill] Yeoman, and they agreed to have a luncheon before the game.”

Once the coaches were on board, the club had to find a way to draw attention to their event, according to Farmer.

“They sat around and one of the guys [there] said ‘how can we promote this?’” Farmer said.

Inspired by the Old Oaken Bucket given to the winner of the game between Purdue University and Indiana University, the Touchdown Club’s board decided to create a trophy for the game made out of a bucket. But they still needed a name.

From then on, the trophy was known as the Bayou Bucket. According to Farmer, Curry stumbled upon the perfect bucket for the trophy one day while out shopping with his wife in New Braunfels.

“They found this old beat up bucket. So he bought the bucket and had a guy he knew put it on a trophy, and that’s how the Bayou Bucket came [to be],” Farmer said.

Between buying the bucket and getting the trophy made, the Bayou Bucket cost the Touchdown Club a total of $179. The trophy was first awarded in the 1974 meeting between the two teams at Rice Stadium, a 21-0 UH win. In the two teams’ 39 games since its inception, the trophy has seen its fair share of college football history.

In 1989, UH beat Rice by a score of 64-0. According to Farmer, just moments after lifting the Bucket, Houston quarterback Andre Ware found out that he had won the Heisman Trophy.

“Andre Ware was sitting in the locker room [at] Rice Stadium, and that’s when he found out that he won the Heisman.” Farmer said.

Six years later, the Cougars again lifted the trophy after beating the Owls 18-17 in the final game in the history of the Southwest Conference, the conference that Rice and UH had been a part of, along with Texas, Texas A&M and others, for decades.

“It came down to a field goal attempt that Rice missed,” Farmer said. “Rice lost the last [SWC] game ever, but they could have won it at the last second.”

Overall, Rice has captured the Bucket just ten times, while the Cougars have won it 29 times. But according to Bailiff, who is now the head coach at Texas A&M University–Commerce, the trophy has meant a lot to the Owls on the handful of occasions that they have won it.

“All wins are special, but that one is really just more special [than the others] because it’s a trophy that represents the entire city of Houston,” Bailiff said. “When we would beat Houston, the kids after the game would spend hours in there taking pictures with it. We took it to the president’s office, we took it to the Board of Trustees, the kids all acted like they were drinking from it.”

Mike Pedé has been on both sides of the rivalry. Pedé, a UH grad, spent 13 working years in the Rice athletic department before returning to UH as the associate vice president for alumni relations. According to Pedé, the players from both schools are always eager to lift the trophy.

“You’d better get out of the way,” Pedé said. “Whoever wins it, they don’t even wait for the presentation, they just storm the other bench and take it. We’ve tried for years to have a formal presentation, I think we’ve maybe pulled it off three times.”

Over the years, Pedé said that he has seen players get creative with the trophy.

This year, the Owls will look to bounce back from a 38-17 loss to the University of Arkansas, and claim the Bucket for the first time since 2010. The Rice defense held strong against the Razorbacks for three quarters, before a fourth-quarter collapse, while the offense struggled to find a rhythm while rotating between quarterbacks Wiley Green and Luke McCaffery. UH meanwhile, is also looking for their first win of the season, after dropping their opener to Texas Tech University. The Cougars will enter the game as eight-point favorites according to the Ceasars Sportsbook.

Saturday’s winner will have bragging rights over their crosstown rivals for the next year, and the game’s final score will be etched into the trophy for good. Over the years, the trophy has come to mean a lot for both schools, as well as the city of Houston as a whole, according to Pedé, but as much as he loves the trophy, he isn’t mistaking it for a work of art anytime soon.

“It might be the ugliest trophy in sports,” Pedé said.