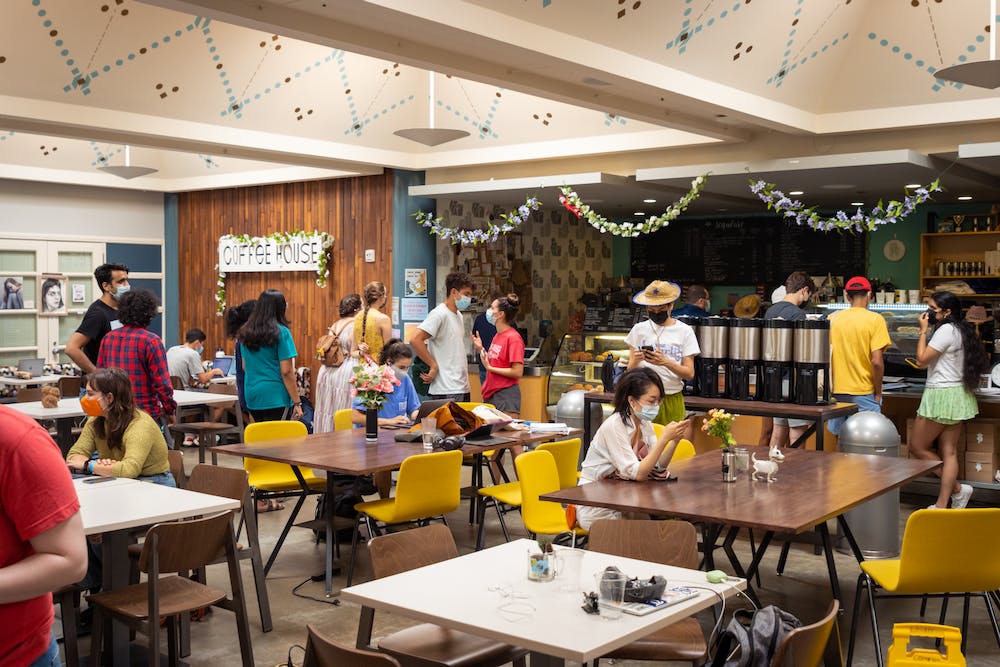 Rice Coffeehouse and Rice Bikes both fully reopened during the first week of class; Hoot will be opening on Sept. 12 or 13, and Willy’s Pub plans on reopening by the end of September, according to the businesses’ respective general managers.

Rice University permitted students to eat indoors at a reduced 50 percent capacity in an email sent by Bridget Gorman, Dean of Undergraduates, on Aug. 24. Rice Coffeehouse, which fully reopened the day before, has since began allowing indoor seating and dining, according to General Manager Miguel Luna.

“[Housing and Dining] gave one of the managers a heads up [about the new policy], and that manager reached out to me,” Luna, a Wiess College senior, said. “So we were kind of ready before the email got sent out to everyone ... We got rid of like nine chairs so that we’re at 50 percent capacity of people eating inside.”

Luna said Rice Coffeehouse will still require students to wear a mask unless they are actively eating or drinking.

Luna said that he is glad to see that indoor eating is permitted on campus again.

“Coffeehouse has always been popular, but it’s a different environment when people get to see other people in line and talk to people in person,” Luna said. “More people are gathering inside instead of the [Rice Memorial Center] courtyard because they can actually eat and drink inside and study.”

Luna said he believes that Coffeehouse will be even more popular if classes return to in-person again next week.

“Off-campus students that otherwise might not want to go to Rice will be forced to be on campus,” Luna said. “When classes are in person, I think there will also be more collaboration that happens, and Coffeehouse is a great place to do that.”

Elizabeth Groenewold, the general manager of Willy’s Pub, said that it is more difficult for Pub to reopen compared to other student-run businesses because its alcohol permit only applies to inside, and so customers cannot take any drinks to go.

“We can’t reopen until [the Rice administration] determines it’s safe to have a certain number of people in Pub,” Groenewold, a Will Rice College senior, said. “But I’m in contact with the people on the [V&W Permits] board, and they are pretty confident that [we can reopen] by the end of September, especially with the recent emails from [administration] indicating that campus is wet and we can eat inside.”

However, given the recent indoor alcohol ban, Pub’s reopening may be delayed depending on the length of the policy change. Gorman said she hopes the policy is a temporary measure.

According to Groenewold, an online ordering system is not a suitable option for Pub as they have to make sure that people are of age when they order.

“The only difference we would make [this year] is that there probably would be a capacity limit due to COVID restrictions and you’d have to mask unless you’re actively drinking, [as well as] limiting the amount of people at a table,” Groenewold said. “But other than that, it would probably be as close as possible to the old Pub.”

According to Groenewold, Pub is currently fully staffed with 38 employees and seven managers, but only four employees have experience working at Pub before.

“So many people have graduated, and we haven’t been open for two years now, which sucks,” Groenewold said. “But ... for everyone’s first shifts, the managers will be there the entire day for the first few weeks. We’re [here] to ensure that the employees are properly trained and know how to work, and that we can be there to answer any of their questions.”

Groenewold said she hopes no one is losing enthusiasm for Pub.

“It was bad timing with [Texas Alcoholic Beverage Commission] restrictions and then COVID restrictions kind of piled on top of each other,” Groenewold said. “But I do want the student body to know that Pub is strong. We’re coming back and it’s going to be just as good as it was when [juniors and seniors] were all freshmen.”

Ryan Emelle, the general manager of The Hoot, said that the management team decided to push back opening to the fourth week due to all the changes and policies in flux on campus even though the student- run business typically opens in the second or third week of classes.

“[The previous] no [indoor eating] policy really affected our business, since people can’t sit at Sammy’s and eat,” Emelle said. “We are hoping for a more lively RMC culture this year to help build our business back up.”

According to Emelle, a Jones College senior, The Hoot will no longer allow online ordering when it reopens.

“That’s a large change from last year,” Emelle said. “However, employees will still be upholding the same COVID-19 policies we had in place last year when preparing orders.”

Miles, a senior at McMurtry College, said that even with the expanded hours, they are still expecting to be extremely busy and are already fully booked for the next eight days.

“The pandemic caused our demand to go up a lot because people want to get out and get active,” Miles said. “That’s also compounded by ... the problems with shipping. So there’s been an increased demand and it has become a lot harder to get hold of bikes, but it’s slightly better now.”

According to Miles, Rice Bikes currently has 25 employees and is looking to hire new employees.

“We have the challenge of [employees] taking semesters off or not coming back [due to the pandemic], so we have to manage that.”

Miles said that one thing Rice Bikes plans on keeping from last year is their online appointment system.

“When the pandemic came, we moved to doing appointments only on the basis of social distancing, but it quickly became apparent that that is a much better way to run things because it’s just better for customers,” Miles said.