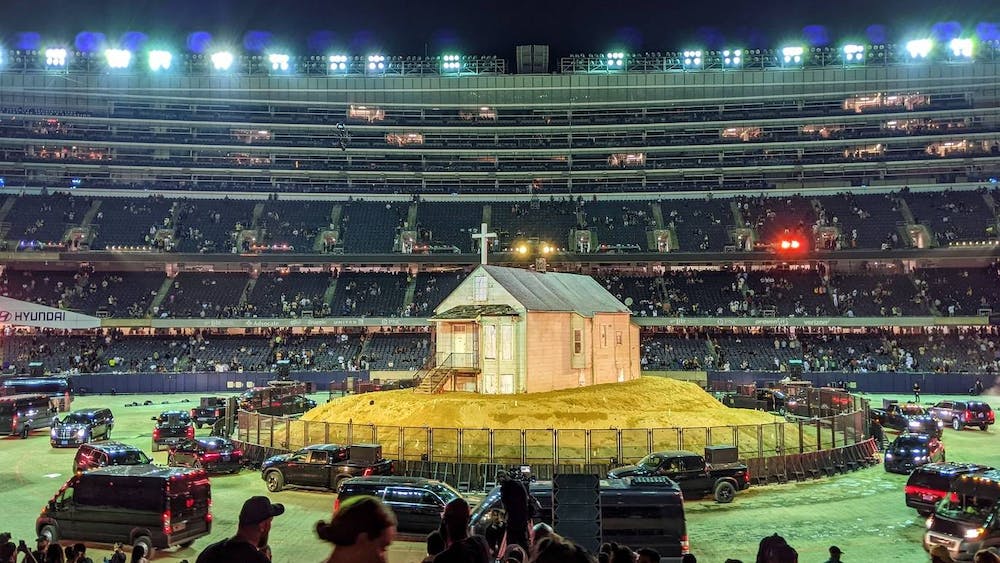 “Believe What I Say”

“Donda,” Kanye West’s long-awaited tenth solo album, finally came out at 7 a.m. on Sunday, Aug. 29. While covering his face and avoiding the typical controversial appearances expected of him, Kanye created one of the most talked about and sought after albums of 2021. For the album rollout, West took his experiment of a “living, evolving art project” from 2016’s “The Life of Pablo” to another level by bringing the creative process front and center to his audience through a series of record-breaking livestream events on Apple Music. Kanye’s iterative changes to the album were shown as it was played on a world stage in three listening events that moved from his birthplace in Atlanta to his childhood home in Chicago. This emphasis on home is made even more poignant with the title of the album, a tribute to Kanye’s late mother, Dr. Donda West, who is featured throughout the work.

“Donda” is some of West’s most engaging work in recent years, a return to form for a musician who has hailed himself as “the greatest human artist of all time.” On “Donda,” Kanye embraces a much more “Jesus Walks” style of Christianity than “Jesus Is King.” By that I mean that Kanye seems to embrace his faith as something more personal to him. The songs are informed by his religion, but that doesn’t dominate the lyrics and album as a whole. Kanye ties the songs to his personal life in a way that leads to more interesting and effective storytelling and imagery than we saw on his last Christian album.

Sonically, “Donda” includes several vocal snippets from Dr. Donda West herself that work to create a sense of poignant continuity throughout the album. This is especially apparent on tracks like the titular, “Donda,” which primarily features a segment of a speech from Dr. West before entering a section with gospel vocals from Kanye’s Sunday Service Choir. On “Jesus Is King,” Kanye often reworked songs from his canceled project “Yandhi” with Christian lyrics. Here, we see the return of some long standing leaks, however in a different way. For example, the “Yandhi” and “Jesus Is King” listening party era “New Body,” makes its return as “Heaven and Hell.” The song is stripped of its beat and lyrics, maintaining only the flow over a completely different instrumental. The transformation allows the song to breathe on its own without being compared to either previous version.

Another track, titled “Jesus Lord,” includes a massive first verse from Kanye that finds him at the top of his game lyrically. The verse references suicide, addiction, violence, loss and grief in an unbroken chain of imagery. “Jesus Lord” is also an interesting example of how Kanye involved his process with the listening parties in the final cut of the album. The original listening party two cut of “Jesus Lord,” a 11:30 minute epic is included as “Jesus Lord pt 2,” while the final version from the Chicago event appears earlier on the album. Rather than removing four of the changes throughout the events, Kanye preserved two versions of “Jail,” “Ok Ok,” “Junya,” and “Jesus Lord” on the final album (helping to bring it to an insane 1 hour 48 minute runtime) as “pt 2” versions: not remixes but a sort of alternative creative path.

Anticipation for the release of “Donda” reached almost unprecedented heights over the past month, thanks in large part to a series of listening parties Kanye hosted, the first of which was held on July 22 at Mercedes Benz stadium in Atlanta, GA, with a promised album release the night of the event. The physical event sold out, while the livestream drew 3.3 million viewers, breaking the previous record for viewers on an Apple Music livestream. The event itself featured the album played over the stadium’s speaker system while Kanye moved around alone on the field. However, throughout the event Kanye donned a tan face covering, a continuation of the months leading up to the album release, in which Kanye wore full face masks whenever in the public eye.

For viewers, the stream went on for almost two hours, panning through the stadium as audiences who attended awaited the new music before Kanye stepped out onto the field. Kanye did not say a word for the entire night and let the music do the talking. The cinematic production made producer Mike Dean’s involvement apparent and showcased a large sound suited to Kanye’s music. However, the mixing was not complete, and for many the album sounded like it needed some work throughout its around fifty minute runtime.

Of course, Kanye did not release the album after the first release party and instead returned for a second release party on Aug. 5. Similar to the first listening event, Kanye arrived after a long delay, but with him came background support who made the event feel more like a concert. Additionally, the songs were mixed significantly better and the production was more refined. New tracks added onto the album gave audiences around an hour and twenty minutes of music to enjoy.

For his third and final album listening event, which took place on Aug. 26, Kanye returned to his hometown of Chicago, where he grew up with his mother. Leading up to the event, Kanye had his childhood home rebuilt in the center of Soldier Field. After another two-hour delay, Kanye emerged from the house and began the album. The highlight of the night for many was when Kanye appeared from the house engulfed in flames and, shortly after, met his wife Kim Kardashian West, whose recent separation from Kanye was widely reported on, as she processed forward in a wedding dress and veil, finally removing his mask and showing a genuine smile.

Musically, this third event was similar to the second listening party except for the omission of prominent features. Some new tracks were also added to the album, beats were changed and the track order was heavily altered. After the listening party, the “Donda” release failed to materialize for three more days. The final album cover, a simple black square, continues the idea of letting the music speak for itself on this release cycle.

Overall, “Donda” features an incredible range of sounds that emphasizes Kanye’s talent at a variety of types of music. The musical variety keeps the album interesting across multiple listens and gives fans a song for every mood. The album has some of Kanye’s best singing on the Lauryn Hill sampling “Believe What I Say” and “Come to Life” along with strong rapping on tracks like “Off The Grid” and “God Breathed.”

“Donda” utilizes Kanye’s diverse musical influences and personal experiences, informed by his faith, to create a compelling and deeply satisfying album. It was worth the wait.