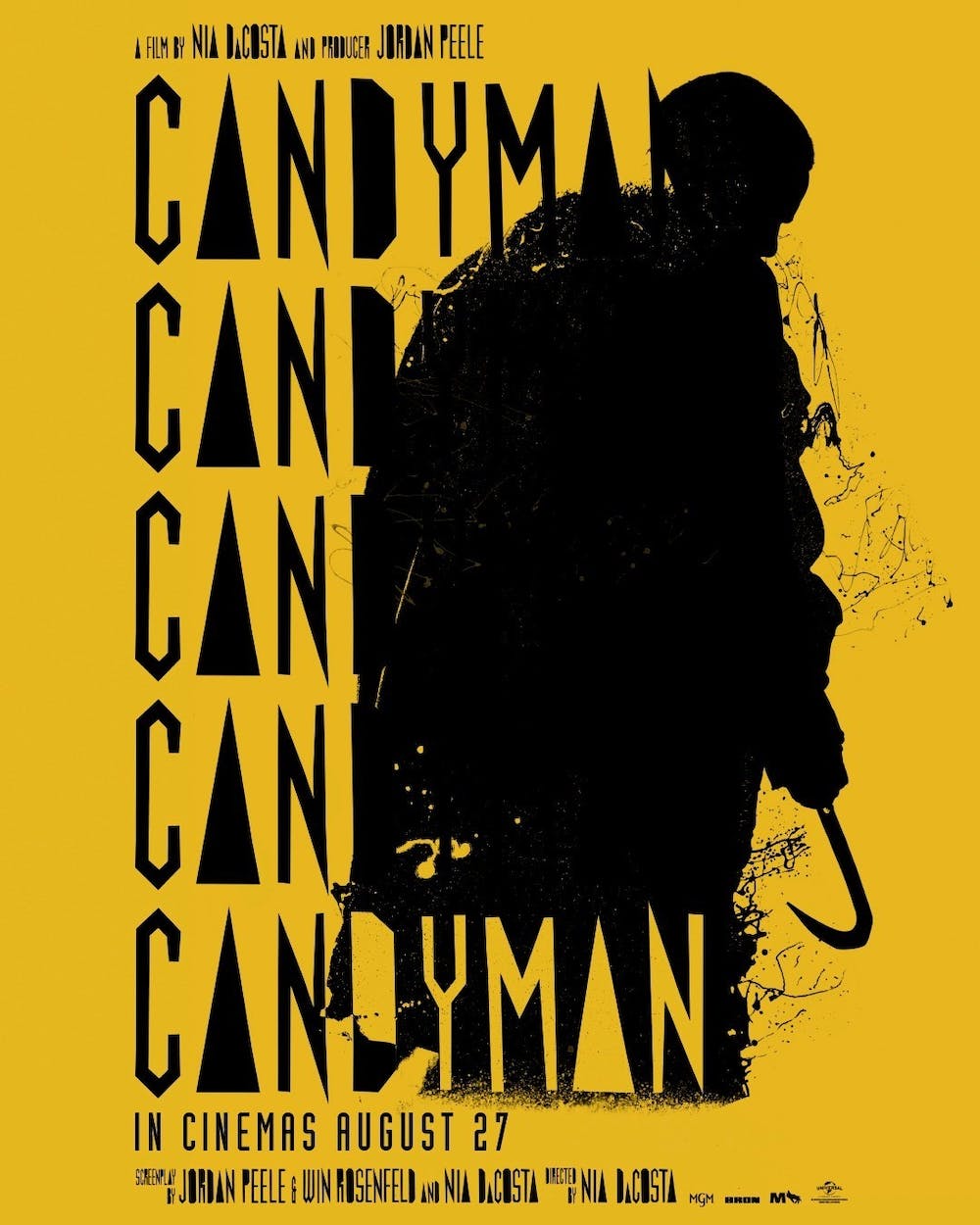 Nia DaCosta’s reimagining of “Candyman” provides strong visuals, sound and social commentary for an excellent viewing experience. “Candyman” follows artist Anthony McCoy as he learns more about the legend of the Candyman, a monster that appears and kills people who say his name five times while looking in the mirror. The movie is a sequel to the original 1992 “Candyman” movie and ignores the two initial disappointing follow-up films, finally providing a worthy successor to Bernard Rose’s visionary original.

The original “Candyman” is unique in that it does more than the average slasher movie. Although it comfortably inhabits the genre, “Candyman” incorporated social commentary with the Candyman’s origin story for a more engaging and thought-provoking viewing experience: the spirit of a Black painter who was murdered by a lynch mob for his romantic relationship with a white woman. As Helen Lyle, a white graduate student, continues to learn more about the community of Cabrini-Green, a Chicago housing project, from the perspective of an outsider, she and the viewers begin to see the difficulties faced by residents of Cabrini-Green in a way unique for movies of the time.

Whereas the original film focused on housing inequality and living conditions of Black Americans, DaCosta’s movie shifts the primary focus to police brutality and gentrification. Especially after the past year of social unrest, protest and injustice, the topic’s relevance is clear throughout “Candyman.” Rooted in real events, the changes seen in Chicago are reflected directly in the movie as Cabrini-Green was destroyed in 2011 to give way to gentrified housing that pushed out the older residents. The real events lead directly into the commentary on gentrification, which can be seen through a newly increased police presence due to the increase in white and wealthier residents in contrast to the remaining row houses left from the project, the last vestiges of what the area once was. The process of gentrification and how it pushes out Black Americans in particular is laid bare throughout the film with both expository dialogue and interactions between characters.

The screenplay was co-written with Jordan Peele, who also produced the movie. Where Peele’s movies often avoid direct portrayals of the issues he is critiquing, police brutality viscerally permeates the storytelling of “Candyman.” Even from the beginning, a child is seen playing with paper puppets to reenact an exchange between a policeman and a seemingly innocent man, interrupted just before the exchange became violent or even lethal. The simple fear in the Black community in spite of socioeconomic status is seen throughout the movie as McCoy ducks behind buildings when hearing a siren, despite not having done anything wrong. Throughout the movie, it is revealed how central police brutality is to the story being told with the story of a new Candyman, Sherman Fields, who gave out candy to children. One day a razor blade turns up in a white girl’s Halloween candy, and Fields was held culpable. When finally found, Fields is beaten to death by the police despite not fighting back. But razor blades continue to show up in candy; Fields had been innocent. The twin Candyman characters across the films explore the injustices faced by the Black community by structures of power and white supremacy throughout history. Nia DaCosta’s storytelling makes a strong and effective statement that stays with viewers after the credits roll by tying social issues directly into the plot of the film.

“Candyman” captures the audience’s eye with engaging shots and is not shy when it comes to depictions of gore. As a horror movie, it earns its R-rating, fitting into the slasher genre like its predecessor. For its exposition, the movie includes segments illustrated with animated paper puppets enacting the scenes as they are narrated. The effect is not only effective from a storytelling perspective but is a unique aesthetic that really adds to the movie. Similarly, the art direction for McCoy’s paintings adds texture and a realistic feeling to the film while echoing the original Candyman's origin story as an artist. Lingering shots of the city of Chicago, often from unconventional angles, create an engulfing cityscape that pulls audiences into the world of the film.

These visuals are complemented by a strong soundtrack that builds the movie’s suspense. Multi-instrumentalist and composer Robert Aiki Aubrey Lowe created a suite of songs that work on a lasting discordance and sense of movement that keeps viewers on edge. His use of human voices throughout the soundtrack similarly creates a discomfort that he says “is representative of the multiplicity of voices, not only deeply cemented in the folklore of Candyman, but of the characters navigating the space in real time.” Lowe’s score works directly with the film based on an understanding of not only the events being depicted but also the meaning behind them. A piece called “Rows and Towers” from the soundtrack contains a “skitter and insect like buzz that swirls throughout the voices” that is actually “the word CANDYMAN spoken and then pulled apart ... until you no longer recognize it as a voice speaking the word, but an otherworldly entity that has been summoned from another realm.” This attention to detail is apparent as the soundtrack pulsates throughout the movie's moments of calm and action, engaging the audience in the events occurring in the movie and the suspense of silence.

The movie is also filled with a talented cast that portrays a real sense of the emotions associated with the idea of Candyman along with human emotions from relationships and the issues addressed in the film. Yahya Abdul-Mateen II’s acting throughout his character’s exploration of trauma in Cabrini-Green and the legend of Candyman is superb, as he slowly descends into an obsessive state as an artist of chasing his inspiration and creating from it. Similarly, Teyonah Parris’ portrayal of McCoy’s girlfriend feels real as she reacts to his irregular behavior with fear and disbelief while working as an art curator and supporting McCoy financially and emotionally. Although their performances are really at the center of the movie, the acting was strong across the board and lent the movie a realistic and emotionally resonant tone.

“Candyman” reframes its namesake while continuing the spirit of social commentary within the slasher genre: moving from a look at race and class divisions in living conditions to a graphic depiction of police brutality in Black communities. Both entertaining as a horror movie and deeply meaningful in its depiction of the difficulties facing Black Americans, “Candyman” is worth the watch.